Last year during his Weimar Republic Cabaret season at the Barbican, entertainer extraordinaire Barry Humphries seemed to have retired his usual personae (Dame Edna Everage, Sir Les Patterson, Sandy Stone and others) while he presented the music of Germany before World War Two. He was also engaged in a BBC Radio 2 series on his favourite songs of the 1920s and 1930s (a further series is promised) and at his last Palladium show, he said it was his farewell performance in the theatre. Time moves on and Mr Humphries is still with us after two farewell performances and, when prompted by questions from the Palladium audience, he admitted that Dame Edna and her cohorts will return yet again at Easter 2020, by which time Humphries will have turned eighty-six. 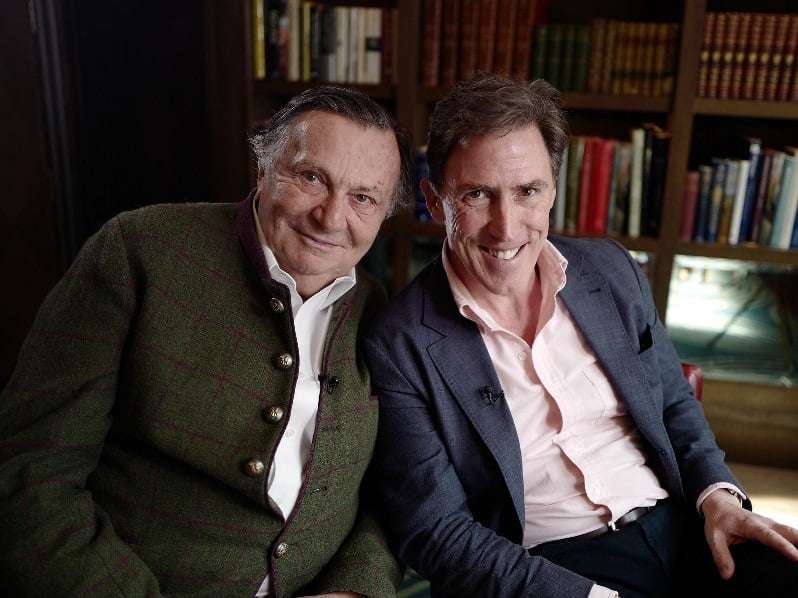 Meanwhile he was back at the Palladium for one night only to be “probed” by fellow funny-man Rob Brydon. Now the word “probed” is a very Humphries sort of verb, or rather it is a Dame Edna word (Barry and Edna are two completely different species, the one totally unlike the other) because the Dame was also out to probe her guests on her television chat show, with the likes of Charlton Heston and Charles Aznavour.

Rob Brydon doesn’t do much probing, but rather prompts Humphries into revealing aspects of his times and career, and he needs little prompting to talk about his amazing life upon the wicked stage. Humphries was born into a middle-class Australian home in Camberwell, a garden suburb of Melbourne. He appears to have had an idyllic childhood with adoring parents who catered to his every whim, even allowing Barry to raid his dressing-up box to appear as other characters rather than as himself. This must have been an augur of things to come later on in his life. It wasn’t him just being an actor, although he did plenty of that including appearing in the original production of Oliver! and Maggie May in the 1960s, and he returned to play Fagin in revivals in 1967 and 1997. He worked with Spike Milligan in The Bed Sitting Room and Treasure Island at the Mermaid Theatre and was in the first Australian production of Beckett’s Waiting for Godot. As well as theatre Humphries has conquered every other aspect of the media – he’s appeared in revue, cabaret, films and television, has written many books and is a great collector, claiming to be a bibliomaniac as well as having a consummate interest generally in music and the arts.

It is astonishing that, despite his parents’ own lack of interest in the arts, he managed to educate himself. At the Palladium he relates the time when, on arriving home one day he found his mother had sold all his books to a man who had come to the front door. “Why?” queried Barry, “they were my books!”. All his mother could say was that, as he had read them all, he didn’t need them anymore. He reveals that over the years he has managed to replace all the missing books, many of which were first editions, for his personal library of over 25,000 volumes. As well as also being an avid collector of paintings, he is a talented painter. As a published author he has written many books based on the stage characters he has created, as well as his own life.

He relates his early endeavours at trying to be a stand-up comedian. Watching others do it he thought it couldn’t be that difficult. Unfortunately he didn’t have an act and his first appearance turned out to be a disaster. He appeared at a rough house with an all-male audience drinking heavily. When told to have blue material, Barry turned up in a blue suit! Early days, but eventually he learned what to give his audience and became a unique performer.

When asked how he selects the “victims” for his shows, Barry always looks not for the obvious outgoing, flashy types but the people who cower in the front. In his own (or Edna’s) way, he tries to put them at their ease with such questions as “Were you bullied at school on account of your appearance?”. This is his way of engaging his audience with whom he has an amazing rapport. The inevitable question came up: who was Edna Everage based on? Before she became a world megastar, Edna was a humble Australian suburban housewife, so it’s obvious that Mrs Everage was in part based on Mrs Humphries, Barry’s mother.

Rob Brydon has admitted that was influenced by Humphries, but who, he asks, does Barry admire? He admits to liking Tommy Trinder and Arthur Askey in his early days and later on Tommy Cooper and Ken Dodd. The evening at the Palladium was illustrated by some of the comedy moments that Humphries enjoys, hence the clips from The Marx Brothers’ A Night at the Opera, the famous cabin sequence where everybody arrives at once; Peter Cook and Dudley Moore in Not Only… But Also; Steve Martin and Eddie Murphy in Bowfinger; Rod Brydon in Gavin and Stacey (naturally enough) and Matt Lucas and David Walliams in Little Britain. Matt Lucas, who was in the audience, took a bow but Barry reckoned that Walliams was absent because “he’s busy counting his money.”

It was a delightful evening, a simple idea that both men picked up and ran with successfully. It would be nice to see and hear more of the same before next Easter.