Homage to The Queen
Music by Malcolm Arnold

The Queen of Air – Alexandra Ansanelli
Her Consort – David Makhateli 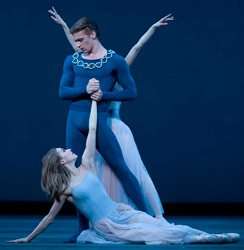 When Triple Bills are planned by ballet companies, the combination of scores and how they contrast and complement can take second place to choreographic considerations. This latest evening from The Royal ballet seems to have music at the forefront of its considerations: Tchaikovsky’s Serenade for Strings, a resurrected and augmented ‘lost’ Prokofiev and Malcolm Arnold’s 1953 coronation commission, Homage to The Queen. It was a blast for the orchestra, which was uncharacteristically engaged for a ballet evening, playing the Arnold with period gusto and the Prokofiev with interest and sensitivity.

This evening of dance was satisfying in a way that only mixed bills can be, allowing the company not only to display a range of dance styles but to make for an experience characterised by contrast and heightened interest. In the best of bills, the experience is cumulative and the works complement each other. Here, director Monica Mason has nailed it in a way she most singularly failed to do her the previous effort (see review) last month.

The opening work was an audience favourite: George Balanchine’s Serenade, a work of huge historical importance. It was his statement of intent concerning a new American école de danse, and is characterised by many movements and combinations which later became hallmarks of his style – thrust hips, open arabesques and speed of attack. 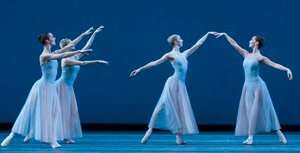 That it is such an ‘important’ work matters not a jot if the performance is poor, but here The Royal Ballet seemed reinvigorated. Whether it was the sight a few weeks back of New York City Ballet performing this piece at the Coliseum and/or the vim of Patricia Neary (one of Balanchine’s ballerinas and a superb coach) in rehearsal I know not, but with fast tempi and commendable attack the ballet zipped by, imbued with a youthful energy. I found NYCB a little too melodramatic, but the Royal Ballet hits the right tone: relationships and events, yes; specifics, no. This approach maintains the mystery – there is a narrative but we are unaware of it (Balanchine never divulged the ‘meaning’ behind certain episodes in this work).

The corps de ballet of 17 women were stylistically uniform and maintained the forms and patterns which sloppy lines can ruin. In the lead roles, a very good Mara Galeazzi was outshone by Lauren Cuthbertson, who sailed her way through her choreography and imbued it with light and shade – a performance with inner dynamic which was superb.

At the heart was Marianela Nuñez, who placed her astonishing technique at the service of the dance. She is a remarkable dancer: intelligent, nuanced and always beautiful. I loved the way she subtly subverted Balanchine by pushing the bends and swoops into Ashtonian territory, which is fine – the Russians dance Serenade with a distinctly Russian accent, and The Royal Ballet, which has been performing this work for over 40 years, makes it ever-so-slightly English. If Nuñez is cast in anything, see it. 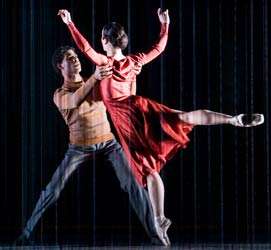 The central ballet of the evening was Rushes – Fragments of a Lost Story, a new work and a commission from the hugely respected Danish choreographer Kim Brandstrup in what was his first work for the main stage at Covent Garden. Characteristically, it was intelligent, subtle and musically sensitive. Brandstrup’s score was a selection from Prokofiev’s cues for a 1936 film of Pushkin’s The Queen of Spades – a project aborted under Stalin’s Terror. Michael Berkeley has taken most of the 24 cues and ‘developed’ them in order to produce a score for dance.

The result is fascinating; Prokofiev wrote this music at the same time as Romeo and Juliet, and there is real quality to his invention. A work of Scandinavian cool, Rushes – Fragments of a Lost Story is just that – there is a story going on in there except it is not necessarily in narrative order, and we certainly do not get to see all of it. Based not only the final version but on one of the plot sketches by Dostoyevsky for The Idiot, it evokes a narrative without delivering it. Like many Soviet films of the period which exist now only in rush form, this work gives us fragments of a story, characters appearing, interacting and leaving, asking us to wonder about the meaning.

The mise en scène is brilliant: two enormous metal bead curtains which fill the whole stage receive projections of images and forms but become transparent when lit from behind – the whole stage picture is constantly changing and succeeds in evoking Soviet film, avant-garde art and cubism in ravishing tableaux. It was superlatively danced by the three leads (Carlos Acosta, Laura Morera and Alina Cojocaru) in what can be discerned as an A loves B loves C relationship, although Brandstrup has tailored his choreography to his dancers so closely that the second cast will apparently have slightly different steps. If as a work it is cool and distant, it is meant to be, and in so being was not an enormous contrast with the distant mysteriousness of Serenade. But that is no fault of the programmer, who has no idea when formulating a mixed bill what form the commissioned work will take. Rushes is a fine work from a subtle and intelligent choreographer who has made a successful if belated Covent Garden main stage début.

To close, nothing vague or distant: Homage to The Queen. Frederick Ashton’s Coronation ballet was last performed in 1958, so when Monica Mason wished to revive for Her Majesty, The Queen’s 80th Birthday celebrations, it was unsurprising that most was confirmed as lost. Ashton’s “Air” pas de deux, originally created for Margot Fonteyn and Michael Somes, survives, so Mason asked the three ‘best’ British choreographers of today to supply the other three elements: David Bintley took “Earth”, Michael Corder “Water” and Christopher Wheeldon “Fire”. 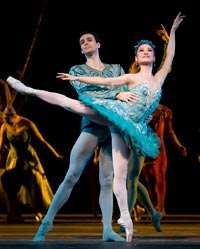 The result, with ‘re-created’ Ashton “Entrée” and “Apotheosis”, is a triumph and presents ballet at its grandest: a grand divertissement and a feast of neo-classical ‘English’ dancing. Bintley was named by Ashton himself as his ‘successor’ and at his best he is a fine choreographer indeed. “Earth” is Bintley in fine form, creativity fair flowing out of him – it is quick and quirky, imbued with Ashtonian inflexions, sharp, darting feet and legs, extravagant épaulement and arms.

Leanne Benjamin is in her early forties, but brought a fresh and youthful persona and strong technique to a sensitivity and musicality which are the products of a long career. Federico Bonelli remains the company’s only true danseur noble, and is always a delight. “Earth” evokes several of Ashton’s works – Bonelli’s solo had more than a hint of Colas’s farmyard solo in La Fille mal gardée, and the Thaïs pas de deux was evoked in much of the orientalist flavour of Benjamin’s arm movements. There are also several moments of the ‘walking on air’ steps so beloved of Sir Fred. “Earth” is not pastiche, but a choreographer nodding to his master.

“Water” sees Michael Corder evoking Ashton too – how can one not with his Ondine in the mind’s eye? But there is also the odd flash of Scènes de ballet, Cinderella and even Symphonic Variations in the inverted V arms in arabesque. Again, these are fleeting moments, and Corder finds his own vocabulary for Arnold’s quirky score. That Miyako Yoshida returned to the Covent Garden stage to interpret the Queen of Water was a cause for rejoicing – this most English of ballerinas (!) revelled in the choreography, her technique still diamond-sharp and her easy, unforced classicism a joy. She was admirably partnered by Valeri Hristov. What caught the eye and the breath in this section, though, were the three dancers who supported the lead couple. Corder’s invention was rich indeed for Laura Morera, Lauren Cuthbertson and Ricardo Cervera, who sailed through difficult, cheeky and tricky choreography. A delight.

Christopher Wheeldon is one generation again away from Ashton, and his “Fire” has a distinctly more modern and indeed transatlantic feel to it (unsurprising given his tenure as first dancer, then resident choreographer, for NYCB). But it was without Steven McRae’s astonishing Spirit of Fire from the original cast (he is injured at present) and although Kenta Kura bravely took on this fiendishly difficult role with not a little aplomb, McRae’s sheer stage presence was missed. Sarah Lamb, devilishly fast in her solo, and Eric Underwood as her Consort were good, but a little bland; Lamb simply does not project sufficiently.

“Air” is pure Ashton, and one would expect the company to field its best stylists in this pas de deux, so it came as a surprise to see Alexandra Ansanelli who has been cast in many plum Ashton roles since her arrival from New York, in Fonteyn’s old role. She is a decent enough dancer, but an Ashton stylist she is not; she had been well coached and remembered to bend some of the time, but her hands and arms are as un-English as they get. David Makhateli as her Consort is again fine enough, but Ashton is not his bag either. Strange casting, and so what should be the crowning glory – a pas de deux of purity and stylish simplicity – was strangely muted. However, this ballet as a whole is a magnificent showpiece for the company, and indeed serves as an anthology of British choreography: Ashton and his ‘school’. Its revival is most welcome.