At last a triple bill from The Royal Ballet, which opened its 2008/9 season with a pair of full-length ballets. Mixed bills are the lifeblood of a classical company, offering the audience a varied diet of works which should both complement and contrast with each other. Things are perhaps not quite ideal in the choice of works in this evening, but all three are fine ballets, even if they do not sit perfectly with one another. 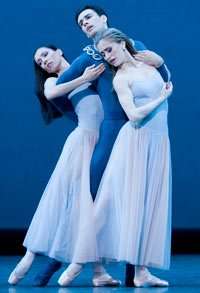 Serenade (1933) is (over-) familiar to London – indeed it seems to be on the bill of fare of every company – but it is no less wondrous for that. The Royal Ballet has a way of dancing it which some find unacceptable – it is a cool, slightly distant affair and is flavoured by the softness of the English style (New York City Ballet for instance take it faster, with more attack and, strangely, in a more melodramatic fashion). That difference was highlighted by Alexandra Ansanelli’s performance; Ansanelli, until recently pure New York/Balanchine thoroughbred, has come to London for the experience, and while many of her performances smack of forcing a square peg into the proverbial round hole, in Balanchine she seems liberated – she is strong and vibrant in Serenade, but rather contrasts with the other dancers. Mara Galeazzi is well experienced as the second girl and delivered an interpretation of characteristic intelligence. Laura McCulloch does not yet have the carriage of a ballerina, competent as she is. The corps had been well rehearsed. 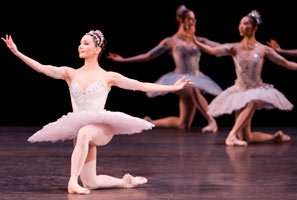 The other Balanchine work which book-ends the Corder work is Theme and Variations, a showcase ballet in the Imperial manner, and one of Mr B’s works in which he looks back to his St Petersburg training and adds his own twist. Recently acquired by The Royal Ballet, it sits well on the company, and indeed the corps de ballet delivered its choreography with aplomb. Striking indeed were the four female soloists who support the lead couple – here including two principals no less, and impressive in their technical mastery, coordination with each other and sunny interpretation.

But this work stands or falls by its lead couple – the creators in 1947 were Alicia Alonso and Igor Youskevitch – and here there was a distinct mismatch. Johan Kobborg dazzled – he has always worked hard at being a virtuoso, which does not come naturally to him, but what he delivers is always a performance of real intelligence, phrasing and musicality; he reacts to his ballerina and is aware of the world of the stage around him. He is, in short, a remarkable performer. In this performance his technique held up admirably (as it had in Manon recently) and he was able to show himself master of all the bag of tricks demanded of him (no no less than Baryshnikov has spoken of the role’s difficulty). 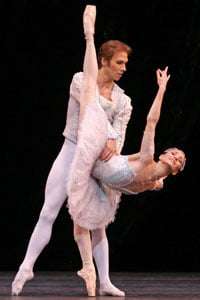 Alas, the injury of Alina Cojocaru brought Roberta Marquez to the role. She is a strong technician but lacks all the qualities outlined for Kobborg above. To compare the opening bars in which the ballerina steps and moves from one pose to the next with the same moves then repeated by Kobborg was to highlight the lack of shade in her dancing, the absence of rubato. Added to which there is a slightly vacant quality and an ever-present rictus; in the pas de deux Kobborg flashed smiles at Marquez, looked adoringly at his ballerina, informed his movements with a logic and a meaning; she merely danced the steps. Admittedly, she settled into a very calm delivery of the main pas de deux but in much of her dancing there is little finish, little attention to holding the stage picture long enough for it to register (a great bugbear of Frederick Ashton). 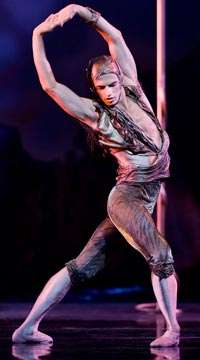 The main focus of the evening was Michael Corder’s L’Invitation au voyage, a 1982 work which made his name as a choreographer but which slid out of the repertoire after 15 performances. Set to five of Henri Duparc’s songs, it has divided critics and audience alike – many feel it over-designed, dated, impenetrable; a real waste of time, effort and money to resurrect a second-rate work. I do not share their opinion and revel in its fin de siècle perfume. Yolanda Sonnabend creates a stunning stage picture and complements it with costumes of curious exoticism – we are unsure as to who these people are – are they people? Spirits? Or evocations of the music, the notes made flesh?

This second cast delivered the choreography with real style – Corder’s movements show the heavy influence of Kenneth MacMillan, not least in the complicated lifts and the still presence of the other dancers as each song is interpreted by some of their number. I was reminded of Requiem and Gloria. Added to this is, I think, the influence of Tudor’s Shadowplay whose eastern exoticism and the evocation of the supernatural I find echoed in L’Invitation. Movement is supremely lyrical, evocative of the songs without being a literal interpretation of them, and here Corder effects a masterstroke: the integration of the mezzo-soprano into the stage picture and indeed the dancing. Harriet Williams walks the stage and joins the dancers at times, at other reclines on the skeletal chaise longue stage left; at times mirrors the dancers, at others they her. It is clever, striking and utterly compelling. I was struck by Leanne Benjamin’s exquisite dancing (no surprise there) but have to commend the whole cast for their engagement in the art nouveau quality of this work, the evocation of the words of Gautier and Baudelaire, the sculpture of Rodin, the tendrils of Guimart. It is a striking work; it creates an aperçu into a world apart and affords an opportunity to inhale the heady scent of patchouli and sandalwood. It is right that it has been revived and in times when dance can all too often be a meaningless jumble of scantily dressed bodies against a plain backdrop, it reminds us that the Diaghilev approach of a real synthesis between movement, music, sets and costumes has the power to say much more.