Founded in 1990 as an organization without ties to the government, the Russian National Orchestra has an active international touring schedule and also has more than 50 recordings, for Deutsche Grammophon and PentaTone Classics, to its credit. One wonders though whether this once-erstwhile ‘cream of the crop’ of Russian orchestral musicians has turned into nothing more than a touring ensemble of whoever is available – a sort of Russian National Pick-up Orchestra.

For starters, some men wore tails, while others were in tuxedos and white ties. It is also one of the most spiritless orchestras I have encountered. Everyone dutifully played the notes, with lots of muscle in the loud passages to be sure, but where was the musical involvement, the joy of making music? One could sense these qualities in only a few lone players; to the rest it seemed to be just one more performance, the seventh of a ten-concert American tour. The playing ranged from competent, if nothing more, in the strings and woodwinds to ragged and even out of tune in the brass.

A few months ago, the St Petersburg Philharmonic seized one’s attention from the very first notes of Schubert’s music for “Rosamunde” with burnished string sound; here the opening of the same composer’s ‘Unfinished’ Symphony quickly put to rest any hopes of a similar experience. Employing reduced forces and antiphonally seated violins Vladimir Jurowski very likely had a ‘historically informed’ approach in mind, but at the same time he didn’t really ever achieve the intimacy of a fine chamber orchestra. While some conductors, one young ‘superstar’ comes to mind immediately, seem to approach their profession as contact sport, Jurowski tends to go in the other direction. He barely moves his feet on the podium, is extremely efficient with very exact, expressive hand motions, and he gives as few beats as possible; unfortunately he thus often deprives himself of flexibility within a bar, and tutti chords were not unanimous. While he seemed to do all the right things musically (except for a questionable extreme slowing down at the beginning of the development in the first movement), one nevertheless had the impression that he was somehow slightly disconnected from the music itself, shaping it, but not really feeling it. What we did not get from him and from the musicians was inner tension or real engagement; just softer and louder dynamics.

This was the New York premiere of Anton Safronov’s completion of Schubert’s ‘Unfinished’ Symphony. In collaboration with Jurowski he has orchestrated Schubert’s sketches for the third movement, and fashioned a finale from two works of five years earlier: Marche heroique for piano/four hands (D602) and the also-incomplete Piano Sonata in F sharp minor (D571). Unfortunately neither movement comes close to approaching the artistry of the symphony’s ‘torso’. The boisterous scherzo, quite a shock after the serene second movement, is based on an almost simplistic theme and overuses timpani. A similar paucity of inspiration haunts the finale, even though it is replete with Schubertian rhythmic repetitiveness and sneaked in the occasional thematic tie to the first movement. It was Schubert after a fashion, very light in style, but certainly not on a level to ‘complete’ his unfinished masterpiece. 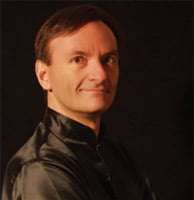 For the concert’s second-half the orchestra appeared at full strength, still in antiphonal seating. As with the Schubert, the double basses were spread across the back of the platform, on fairly high risers. Thus deprived of the resonance of the floor, and far away from the cellos, they were almost inaudible and unable to provide the deep foundation to the string-sound that is crucial to Brahms.

Brahms’s D minor Piano Concerto has a tendency towards brashness if the conductor isn’t careful, and strident strings are not what one wants here. This was a very loud and aggressive account of the piece, and Stephen Hough banged mightily to be heard over the orchestral din. When he had a chance to be expressive, at the beginning of Adagio, he displayed some very musical ideas; at the end of the movement though the attempt by pianist and conductor to achieve profundity resulted in something totally disconnected form the rest of the piece. The both went out with a thunderous torrent of sound in the finale, triggering a Pavlovian standing ovation.