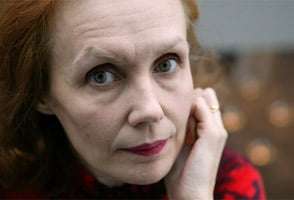 Kaija Saariaho’s richly scored opera “Adriana Mater” was first staged at Opera Bastille in 2006 and here received its UK premiere. The opera itself is set to a rather wordy and discursive libretto by Amin Maalouf, who was also part of the creative team for Saariaho’s highly successful first venture into opera “L’Amour de Loin”.

There are many themes to “Adriana Mater” – but essentially the opera concentrates on the outcome of the rape of Adriana by the insecure and brutal solder Tsargo, and whether the character of the offspring of that violent act, Yonas, will have a character similar to his absent father or his attendant mother.

It is a treatise on nature versus nurture. Therein lies one of the problematic aspects of the work. The most dramatic moment, the rape, is depicted almost entirely musically and chorally; the remainder is either dream-sequences (surely rather passé these days) or commentary by the protagonists that serve to clarify or justify their motivations and thoughts.

Saariaho has set the text so that for the singers there should be little trouble making it audible, and the soloists here were exemplary in this respect. However, this means that the characters spend much time communicating with the audience rather than one another, and this saps the work of much sense of theatre and unfortunately dissipates some of the tension that the music generates. This is exacerbated by the generally similar tempo of all the word setting, which is almost oratorio-like. That may have been intentional on the part of the creators, but in a concert performance without visual ‘distractions’, there was the odd longueur.

That being said there was much to enjoy in the performance. Saariaho’s music is always distinctive for its wonderful crystalline textures even when the orchestration is very dense, and the music here is rather more complex and brutal than her earlier operatic ventures. The sounds of piano, bells and harps are integral to the sound-scape, and there are tension-creating uses of pulses involving repetitive use of semitone intervals, and also of glissandos in almost every section of the orchestra. Some of the woodwind-writing is very evocative, and there was a lovely theme, initially on the piano, that provides the rather romantic and cathartic end to the piece.

As one would expect of an orchestra noted for its versatility and long-proven dedication to contemporary composers, the BBC Symphony Orchestra under Edward Gardner gave the work every possible chance with superb playing. The chorus is also an orchestral ‘voice’, providing atmospheric wordless colour at many points, or occasionally bursting through with repeated words to reinforce those sung by the principals, or to depict the aggressors in the conflict during which the rape takes place. Although confined behind the orchestra and almost invisible behind their music-stands, the members of the BBC Singers made their presence felt. 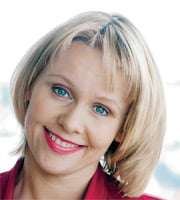 Two of the singers were in the cast at the stage premiere. Solveig Kringelborn sang the part of Adriana’s sister Refka. Initially condemning of her sister following her rape by Tsargo and uncomprehending of her decision to follow her pregnancy through, she often provides the trigger for ensuing events. Despite what seem like a fearful range and some pretty treacherous intervals she was very much in control and gave her utterances an appropriate edge where needed.

The Canadian tenor Gordon Gietz was also in the original cast and he brought out all the latent violence (inherited nature) of the impetuous and angry youth, and also the compassion and sensitivity that ultimately saves him. This was no mean feat as the vocal lines are strenuously high.

As the generally rather placid Adriana, Monica Groop’s beautiful and mellow mezzo-soprano was heard to great effect, and physically she evinced well much of the inner pain of the character. Jyrki Korhonen also managed to capture physically the thuggish quality of the young Tsargo, and then by telling use of stillness made much of the older character’s maturity and blindness – the reason why his son cannot bring himself to commit patricide.

All the principals had head microphones, which allowed some of Saariaho’s electronic effects to be effectively realised. There was a simple semi-staging of a sort by Kenneth Richardson that outlined the limited action well, and with some simple if rather predictable lighting.

It would be good if London could now experience a full staging of one of Saariaho’s operas – and, indeed, Gardner introduces “L’Amour de Loin” to English National Opera next year (first night is 3 July) – although their static qualities would need to be addressed by a very skilled director. That said, Saariaho’s individual music is always attractive and worth hearing on its own terms.