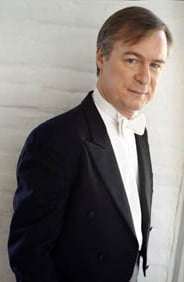 The second of the Saint Louis Symphony Orchestra’s two concerts at Carnegie Hall showcased four works steeped in themes of doom and foreboding in a feat of provocative programming on the part of David Robertson. While Stern Auditorium was not sold out, the concert was well attended, with many SLSO supporters in attendance along with a sizeable contingent eager to hear the New York premiere of a major work by John Adams.

The concert opened with a performance of Brahms’s Tragic Overture that was dispatched, at least for the work’s first half, with too much efficiency and not enough bite but suddenly took on power and poignancy in the slower central section, with fine playing – alternately poignant, pungent and craggy – from the woodwinds in particular, and the return to the allegro tempo brought something more ominous and real fire, building to a hard-hitting coda.

Alban Berg’s Violin Concerto, his final work, was written in 1935 in memory of Manon, the daughter of Walter and Alma Gropius – and also became Berg’s own requiem. The work is also a retrospective and summation of Berg’s aesthetic: steeped in lush romanticism, elusive tonality (although a twelve-tone work, it gravitates around the key of B flat), waltz tempos and the final Variations on Bach’s chorale ‘Es ist genug’. Christian Tetzlaff brought both visceral power and rhetorical eloquence to the performance; his Greiner instrument produces an enormous volume of sound, which allowed Robertson to employ a wider dynamic palette than one normally hears in this work. The first (two-part) movement frequently confronts players with hairpin-turn changes in mood and color as waltz rhythms give way to anguished outbursts; Tetzlaff and Robertson handled these moments of rapid contrast with assurance, sacrificing nothing in impact while keeping the movement whole. The quieter moments at the end brought to mind a collision of Johann Strauss II and Mahler.

The only weak moment came with the opening bars of the second (also two-part) movement, which didn’t deliver Berg’s version of the “hammer blow of fate”. Tetzlaff, though, played the anguished accompanied cadenza with the most tangible, emotional force. The Variations effectively spanned the emotional arc, from mourning to being at peace, with remarkable transparency and beauty from soloist and orchestra. As an encore Tetzlaff offered a soaring account of the Andante from Bach’s Unaccompanied Sonata (BWV1003).

In strong contrast to Berg, Robertson took an uncharacteristic approach to Sibelius’s final major work, Tapiola, a tone poem on the mythical forest deity Tapio, making it a study in shifting sonorities and fragmented, metamorphosing form. Robertson’s kept the constantly varying ‘theme’ in the background, color and contrast at the fore, and showcased the Saint Louis Symphony’s broad palette of string textures and emphatically-played divisi passages, and brought energy and force to the work’s swift central section, sections dovetailing with stunning precision. One brass outburst reminded of Sibelius’s Lemminkäinen Legends before falling in line with Tapiola’s tonal and structural vagaries; the final section, opening with string tremolos rising from silence and then vanishing, was not so much reminiscent of a Nordic blizzard as of ominous, archaic spirits trying to assert themselves but ultimately being vanquished by reality and reason. Robertson’s provocative approach to the work was thoroughly engaging.

John Adams has focused on contemporary issues in his operas, and his most recent, “Doctor Atomic”, is a post-modern meditation on the birth of the atom bomb and its “father” Dr J. Robert Oppenheimer. As with his other operas, Adams has extracted and revised musical sections for concert performance – in this case a 25-minute, single-movement Doctor Atomic Symphony. (Different, then, to the work Adams conducted at Proms 2007. See link below. – Ed.) In the program notes, Adams specifically cites Sibelius’s Symphony No.7 as an influence on his compositional thinking, but the work does not mimic that symphony’s broad arc but is unified by the book-ended, ominous cacophony that dominates the opening and closing sections, steeped in Adams’s familiar tonal, post-minimal style. The fragments of melody and brass fanfares over agitato strings that open the work stood in muscular contrast to Tapiola, but the section that followed – a busy, bustling, rhythmic crossroads of themes and instrumental sections – sounded less like post-minimal Adams than a mid-20th-century American symphonist, with musical figurations reminiscent of two musicians whose starts were on the rise at the dawn of the ‘atom age’, Leonard Bernstein and Bernard Herrmann.

Music with the introspective feel of Adams’s “El Niño” pervades the ritual ‘corn dance’ which precedes the most impressive music of the symphony, the hymn-like final trumpet tune (in the opera, sung by Oppenheimer on John Donne’s “Batter My Heart”) played with soaring beauty by Susan Slaughter interspersed with tutti outbursts rhythmically and texturally reminiscent of Adams’s Harmonielehre, but pushing the music through a harrowing ‘final countdown’ – Adams has not only produced another satisfying, individualistic work, but whetted my appetite for the entire opera.