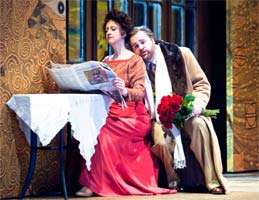 Richard Strauss’s charming and witty eighth opera remains something of a rarity; odd in some ways as the title role, although demanding, is a peach of a part for any diva with good stage-presence and comic-timing allied to a floating creamy voice. The role has attracted artists such as the late Elisabeth Söderström, Felicity Lott, and Yvonne Kenny. Söderström’s Glyndebourne performance from 1974 under Sir John Pritchard, in English, has recently been released by Chandos, and Lott can also be seen in that same Glyndebourne production on DVD, which Scottish Opera also mounted in 1986. Lott sang the role in impeccable German in a wonderful production at the Munich Opera Festival in 1988; Yvonne Kenny at Garsington this year. So, generally, “Intermezzo” has become something of a festival piece.

This new production is being mounted as adventurous repertory by Scottish Opera; a brave, but welcome, decision in these financially straitened times. Edinburgh’s Festival Theatre was not quite full, but those who attended this performance were certainly responsive to the humour and pathos of the piece in equal measure. 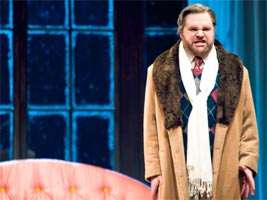 Wolfgang Quetes’s direction tends to play the action straight, but crucially manages to avoid the trap of overplaying the inherent mawkish elements of the plot. It must be hard to do that when Strauss is in his most sentimental mode. Quetes is particularly adept at making sure the audience understands from the outset that the seemingly tempestuous relationship between Christine and Robert Storch was their absolute norm, and that helps make the ending of the work more successful. 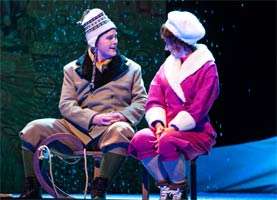 Anita Bader’s Christine had feistiness as well as vulnerability, the latter making her seem less of the harridan that Robert’s friends believe she is. She was subtle in her responses to Nicky Spence’s Baron Lummer – dramatically a particularly sleazy opportunistic charmer, and nicely sung too. I liked the way he attempted an intimate touch on several occasions, and she (wisely) restrained herself from responding. This was counterpointed nicely by her enthusiastically physical relationship with her husband at the end. She also managed to bring a great deal of humour without overplaying it, particularly in the scene in the Notary’s office, and also in the scene where she inspects the lodgings she finds for the Baron. She also dances rather well! Vocally she also managed the tricky conversational lines with aplomb, and also floated some exquisitely ethereal high lines in solo scenes, especially when she has dinner alone. Just occasionally she was rather swamped by the orchestra in the immediate acoustic. However, this was a subtle portrayal that left one appreciating the generosity of Christine (and therefore understanding Strauss’s wife better!).

As Robert, Roland Wood’s sappy and forceful baritone was heard to advantage, and dramatically he played off Bader very well. He was also amusing in the first scene of the second act, relaxing well into Skat (German card-game), and then completely nonplussed when the threatening letter from his wife arrives. Jeremy Huw Williams made much of little as the Councillor of Commerce in that scene. In the final breakfast encounter Wood revealed himself an adept comedian, particularly when it came to decapitating his boiled egg!

There were some other great cameos in the smaller roles. Sarah Redgewick’s put-upon Anna was amusing in her response to her mistress’s erratic behaviour, evincing sympathy at times. Indeed there was something one felt that was mutually interdependent in their relationship, likewise Hannah Taylor’s cook-with-attitude.

Manfred Kaderk’s designs helped keep interest in the quickly flowing scenes, the bedrooms or the Baron and Franzl were nicely intimate, and the use of mirrors in the Grundlsee Inn cleverly suggested roominess. The front-cloth, depicting Klimt’s “The Kiss”, which separated the two lovers and left them framing the sides of the stage throughout is a clever idea.

In the pit there were also wonderful things going on! Scottish Opera’s new music director, Francesco Corti, conducted a lush account of the score, his players relishing both the romanticism and their opportunities for orchestral painting; the many Interludes showed them at their varied best. Ian Ryan’s piano-playing was notable at the start of the Grundlsee Inn scene, and the trumpets and horns had a brilliance of tone that was thrilling.

“Intermezzo” itself emerged as a more substantial work than it is often given credit for. It perhaps can be considered the first self-promoting “reality opera”, and that is what perhaps makes it relevant for the current age. Strauss’s libretto pokes genial fun at many subjects, not exclusively musical ones. It is undeniably fun; and this production of it is worthy of revival.