Sincerely Noël
A cabaret of the music, lyrics & poetry of Noël Coward 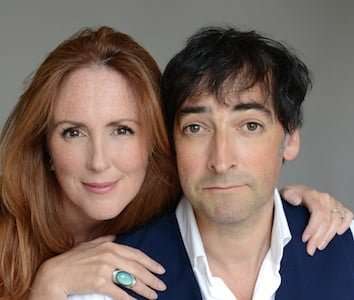 What a delightful surprise this show is. Ever since the successful revue Oh, Coward! – in New York in 1970 – and the great hit made by Cowardy Custard at the Mermaid Theatre – London 1972 – anthologies of the British songwriter, playwright and spinner of poetry and prose, Noël Coward, have appeared fairly frequently (including last July at The Crazy Coqs), but Alistair McGowan and Charlotte Page makes every item a fresh and invigorating discovery.

Any performance that opens with a straight rendition of ‘Mad about the boy’ has great confidence in itself: you could have heard a pin drop during one of Coward’s most loved and performed numbers, sung perfectly by Page, whose beautiful voice is one of the evening’s greatest pleasures. She and McGowan make a splendid (indeed married) team, particularly in the dialogue sequences. McGowan realised when first reading the poems that they are mini-dramas, and would benefit from being shared, occasionally making the ‘cast’ bigger by skilful use of dialects and accents.

The first poem to which we are treated is the 1905 ‘Honeymoon’, in which a pair of newlyweds departs from Paddington Station en route to Ilfracombe, watching the suburbs go by with Betjeman-like observation: “Rows of small houses, neatly matched, / Safe, respectable, semi-detached.” Then ‘Mrs Mallory’ is a perceptive account of a middle-aged American housewife braving a visit to a psychiatrist, which all ends rather sadly, and ‘Epitaph for an elderly actress’ is the funny if poignant description of a performer “in a rage about age” and determined to retire. “She certainly could have done worse, / Than Hay Fever or Juliet’s nurse.”

The songs have been chosen with loving care, and include some of Coward’s most affecting ballads, ‘If love were all’, ‘You were there’, ‘The party’s over now’, ‘Never again’ and ‘I travel alone’. ‘You were there’ is initially given an unusual waltz tempo from Warren Wills. The poem ‘Lie in the dark and listen’ conjures up the days of World War Two when bombers flew overhead while those exempt from service slept “in their warm civilian beds”. This section includes the hilarious impersonation of William Hague insisting that ‘There are bad times just around the corner’.

When tributes to Coward get to his wartime pieces, it usually means the song ‘London pride’, but here ‘I’ll see you again’ is chosen as a touching reference to wartime separation. Also unexpected is the treatment of ‘Mad dogs and Englishmen’, very funny, making one appreciate afresh the brilliant lyrics. After the brief interval, is a long but illuminating poem, ‘Not yet the dodo’, about upper-middle-class parents (who attend the Queen’s Garden Party) who discover that their son is gay. There are half-a-dozen or more other numbers and readings that add to the pleasure, and the ‘Balcony Scene’ from Act One of Private Lives is as fresh as ever, due to Page and McGowan’s expert timing. I am sure Coward himself would have warmly applauded this civilised, immensely enjoyable cabaret.