The Return of the Soldier
A musical based on the novel by Rebecca West, with book and lyrics by Tim Sanders, music by Charles Miller 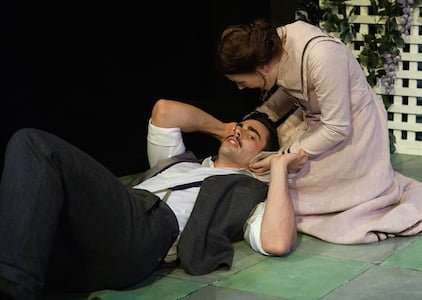 Rebecca West wrote her first novel, The Return of the Soldier, during the First World War, publishing it in 1918 when she was 23. It tells of Captain Christopher Baldry, who returns from the war unexpectedly, while his wife Kitty thinks he has been killed in action in France. Suffering from shell-shock he goes to see a former lover, Margaret Grey, a barmaid he knew before his wedding, because the state of his mind and the traumatic effects of war have blotted out his memory of being married. Christopher and Margaret had split up over a jealous spat but he thinks he is still with his former lover. After the break-up he married Kitty in what now appears to be a loveless relationship that may have suffered through the loss of their child in infancy.

It was a mature work considering it was West’s first book and she was relatively young. She had taken on a complex subject, even to the extent of introducing psychoanalysis, which was in its formative years. West went on to write many more novels and historical works but The Return of the Soldier was generally overlooked in preference to her later, more exacting books, journalism and letters. She also trained as an actress and took her pen-name from the heroine of Ibsen’s Rosmersholm. She was born Cicely Fairfield. 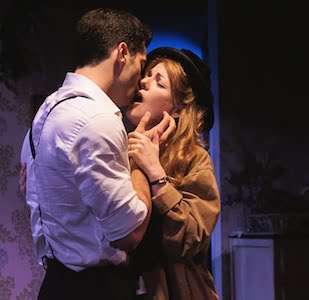 The Return of the Soldier makes an ideal subject for Charles Miller and Tim Sanders’s musical treatment. There was also a very good film version made in 1982 with Alan Bates and Glenda Jackson. The musical limits itself to six characters, the others being Jenny Baldry, who lives on the same country estate as her cousin Kitty, William Grey, Margaret’s husband, and Doctor Anderson from whom Christopher gets help. We find Kitty and Jenny leading lives detached from the horrors of the war but they are shocked to hear from Margaret, a rather plain, middle-aged housewife, who has received a letter from the War Office about Christopher’s return. Kitty wonders why she, his wife, has not been informed of this news. When he comes home and does not recognise her, Kitty is forced to grieve both for the living husband she thought dead and also for her lost baby boy.

It is a very moving story and it is told delicately through Miller’s music and Sanders’s book and lyrics. It is mostly sung-through but with enough interlinking dialogue to thread the songs together satisfactorily. At times it is quite poetic in lines such as “we are cherry blossom waiting to fall” or “you are suddenly the river in my arms”. The music slightly reminds one of Sondheim in the rolling piano passages that move the lyrics along, while at one point there’s a very jolly ragtime melody in the style of Scott Joplin for the doctor’s song ‘Head master’.

There’s an element of class consciousness in the difference between the two households, which is delineated through Simon Anthony Wells’s set which is half elegant country estate and half rundown kitchen in Willesden, the name of which place the snobbish Kitty can barely bring herself to utter. However, Christopher, who is well-bred from an upper-class family, does seem to have been happier with the working-class Margaret than with the social-climbing Kitty.

In the scenes with Christopher and Margaret, the poor Willesden wife caught in a dull marriage to William Grey, literally lets down her hair from a tight bun into free-flowing locks as a symbol of her liberation to love and happiness albeit with the man she was destined not to marry. William is too predictable to be exciting. As a couple, Margaret says, they are “nothing like lovers in a romantic novel but more of a gentle to and fro…”.

The performances are excellent, with Stewart Clarke making the awkward role of Christopher thoroughly believable in his joy at being reconciled with Margaret and the pity at the angry confusion over allegations of his being married. Zoë Rainey as Kitty is uptight and rather forbidding at having her (toffee-) nose put out of joint. The character of Jenny (the narrator in the book) is an uncertain quantity and is really there to provide a link between the others. Although faithful in spirit to her cousin Kitty, she eventually gets to know and like Margaret. Charlie Langham as Jenny serves the purpose well.

Laura Pitt-Pulford as Margaret is the strongest and most sympathetic character. We feel for her in such a dilemma and the chance to relive the time when she was at her happiest with Christopher. The actress manages the change from drab housewife to liberated lover very well. Her solo numbers are particularly good in ‘Am I what you are to me?’, ‘I know how this ends’ and the song describing her dull if devoted husband ‘Mr Grey’. As William and Dr Anderson Michael Matus presents disparate characters, with great respect for the former, as he sings ‘The little things I need’ and a rather bluff exterior for the psychoanalyst who has been boning up on Freud.

This gentle and very moving piece has a score played on piano and cello which reiterates the mournful nature of the subject matter. Unfussy and sympathetic direction by Charlotte Westenra turns this work into a very satisfying chamber musical.