The songs of Stephen Sondheim from Company, Sweeney Todd, Follies, Saturday night, Anyone can whistle, Do I hear a waltz?, Marry me a little, Merrily we roll along 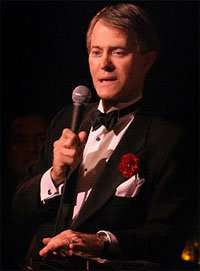 In 1970 American singer and pianist Steve Ross was lucky enough to see in New York the last run-through of a show called “Company” before it went on the road to try out in Boston. As he says in his new show, “Good thing going”, a tribute to the work of Stephen Sondheim, the musical form as we knew it was about to change again, as it does every so often. Jerome Kern’s “Show Boat” made the change in 1927 from musical comedy to musical drama, in 1943 “Oklahoma!” brought realism to the American musical, and in 1957 “West Side story” integrated song with dance in a way hitherto untried. In 1970 came Sondheim’s “Company”, a musical but not one with a linear construction. It comprised a dozen or so playlets or sketches by George Furth detailing incidents from a young man’s life in which he cannot commit to a lasting relationship such as marriage. Instead both he and the audience observe his friends and their marital status.

As Steve Ross says of Sondheim, he raised the state of the art of the musical and pushed the envelope in a different direction. Gone was the traditional musical-comedy that relied on merely entertaining the audience and in came subjects not usually dealt with unless it be in opera, such as anxiety, ageing, disillusion and despair. Sondheim was featuring the darker side of life and the human psyche. His works were not totally devoid of humour but it is of the black variety, entertaining but also intense and brutish. The immediate example of this is the show that followed “Company”, namely “Follies” – the irony is already waiting there in the title.

In “Follies” Sondheim recreated a musical follies show from a bygone era but also etched in portraits of the current follies his characters are going through – trying to relive their younger lives but not realising that the past, like all the old Follies revues, is dead and long gone. After “Follies” came “A Little Night Music”, based on the Ingmar Bergman film about marriage and other relationships, most of which are dysfunctional. “Pacific Overtures” was another immense departure, even for Sondheim, as he depicted an unflattering portrait of American colonialism in Japan. And then came “Sweeney Todd”, his musical thriller about a barber who carves up his customers and lets his landlady pop them into pies.

Was this really the stuff of the American musical? Indeed it was then and it is now and, even if it resembled more an English Victorian melodrama, it is still Sondheim’s masterpiece and shows just how far he could take his art. As you can see, Sondheim never deals in the obvious but reinvents himself.

In his one-man show, Steve Ross gives us a cross section of Sondheim’s work which, as the “Side by Side by Sondheim” compilation show demonstrated, little bites of Sondheim can be very entertaining particularly in the hands and voice of Ross. He begins with a medley of ‘Another hundred people’ and ‘Being alive’ from “Company” and then ‘Pretty Women’ and ‘Johanna’ from “Sweeney Todd”. These songs sum up Sondheim’s preoccupations with lonely and desperate people, the first telling how solitary you can feel even in a big city; the second is a cry for help by someone who cannot connect with other people on a deep enough level. The third song is about obsession with the opposite sex by men who for one reason or another have no relationships, and the fourth describes how one man plans to save the girl he has fallen in love with. 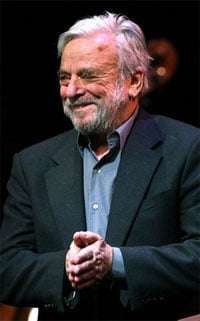 There is further gloomy philosophising in ‘Buddy’s blues’, ‘Too many mornings’ and ‘Who could be blue?’ (written for but dropped from “Follies”) and ‘I’ve got you to lean on’ and ‘Anyone can whistle’ (from the show of the same name). In all these songs there is complexity, contradictions and opposites, exemplified by a line from “Company”: “you’re sorry / grateful, regretful / happy”. This is perhaps why some of Sondheim’s work has not found a popular place with US audiences. He generally does better in the UK where irony is welcomed and accepted.

Although ‘June/moon’ rhymes will always be the staple diet of popular songs, Sondheim’s lyrics are something else again. Being not only composer but also his own lyricist, his work has a strong unanimity about it. The words and the rhymes coalesce with the music, the lyrics blending seamlessly without force or unnatural rhymes in an almost conversationally poetic style. Sondheim achieves his often clever and amusing effects with surprising brilliance but is never predictable and he never puts a word out of place.

Steve Ross is an ideal interpreter of Sondheim and he brings his own feelings and experience to bear on the songs, adding an extra level to an already-complex body of work. Other songs in the set come from “Do I hear a waltz?”, which Sondheim wrote with Richard Rodgers, “Saturday night”, “A little night music”, “Marry me a little”, a show formed of songs cut from other Sondheim musicals, and “Merrily we roll along”, which provides the title of Steve Ross’s show even though the song ‘Good thing going’ is not part of the programme. However, “Merrily” provides the last song of the evening, ‘Old friends’ (“It’s us, old friend – what’s to discuss old friend? / Here’s to us, / Who’s like us – ? Damn few.”).

Well, hearing just a fraction of Sondheim’s output in Steve Ross’s immensely enjoyable tribute allows us to listen to some very good old friends, but who’s like Sondheim? What’s to discuss? Not even damn few, for there is nobody quite like Stephen Sondheim.

Steve Ross gives us some two dozen Sondheim songs in an evening of utter brilliance. He even manages something from Sondheim’s first-ever musical, “All that glitters” which he wrote at the behest of his mentor Oscar Hammerstein II. The rest of the evening is devoted to some of Ross’s favourite songs by Cole Porter, Irving Berlin, the Gershwins, Charles Trenet, Murray Grand, Jerry Herman and even the first song he ever sang at Pizza on the Park at his London debut in 1982, Milton Ager and Jack Yellen’s ‘Hungry women’, a comic song about girls who want nothing else but to feed themselves. As he says, “I feed ‘em and weep”. Pizza on the Park seems to be back to its old style of cabaret, so it too must be cherished again. Steve Ross’s opening night showed just how popular this sort of show can be, so catch him while you can.