Stockhausen
MITTWOCH aus LICHT [WEDNESDAY from LIGHT] – Opera in a greeting, four scenes and a farewell [Staged world premiere of the complete opera] 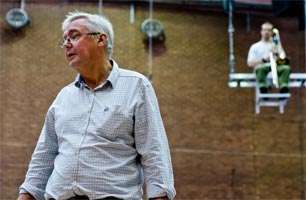 The ever-enterprising Birmingham Opera Company, under the zealous direction of Graham Vick, was entrusted with the huge challenge of presenting Mittwoch, the penultimate opera of the seven-part Licht cycle, and the last to be performed as a complete work. Alas, Karlheinz Stockhausen (1928-2007) was not here to witness it. Some commentators have suggested that Mittwoch is not performable. Nevertheless, performed it was, and with completely compelling conviction throughout its nearly six hours’ duration.

Like all the other operas in Licht, Mittwoch has its own special features and subject matter. These include the element of air (and with it, flight), the theme of love, friendship and cosmic solidarity and the notion of the significant figures of Licht – Michael, Eve and Lucifer – working in co-operation. There is no story as such; rather the four scenes plus the electronic music of the greeting and farewell explore these ideas – and others – in dramatic ways which are evidence of Stockhausen’s fantastical musical and theatrical imagination.

In total darkness, the eerily atmospheric music of the ‘Wednesday Greeting’ began. Gradually, moving bodies could be discerned and then various tableaux vivants were mimed or acted out. Their meaning was not immediately discernible. Nearly all had gestures or motions reaching upwards. There were also resonances of other moments from Licht – the pregnant women and the umbrellas reminded of scenes from Montag – and the children at play or fighting perhaps suggesting the young trio of Michael, Eve and Lucifer. Some of the images – the aeroplane, for instance – foreshadowed those to be seen later in the opera. 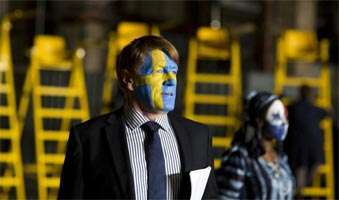 Eventually, the audience was ushered into a brightly-lit second performing space, the surround of which had very tall ladders with a seat at the top, all painted yellow – the characteristic colour of Mittwoch. With a stroke of a bell, the President summoned the parliamentarians to a session in which the topic for debate is love. The rich tenor of Ben Thapa led the proceedings and he also conducted, though as part of the delegation rather than being an outright boss. In the first three scenes of Mittwoch, Stockhausen liberates traditional performing ensembles from their customary roles or places of performance. The choir dispenses with a formal conductor – and, in the drama, is meeting “above the clouds on the top floor of a skyscraper” – orchestral musicians play floating in the air – and a string quartet performs from the sky.

The singing of Ex Cathedra’s 36 members (the number requested by Stockhausen) was, quite simply, stunning. I have rarely heard such assurance in a performance of a new work. The singing was extremely firm and full-blooded. There are a number of solo passages, all of which were delivered securely and in a characterful fashion, so it was a pity that they were not – with the exception of the coloratura soprano of Elizabeth Drury – identified.

After an interval, we were greeted by the astonishing sight of eleven instrumentalists suspended in the air on individual chairs waiting to play. Here, Stockhausen’s vision is perhaps at its most audacious (though maybe that description also applies to scene 3). He imagined the players “floating high in the air from far away: individual soloists fly closer, in and above his (her) own space”. These include a towering cathedral roof, ships in a harbour and a market-place in Marrakesh. Like Wagner, Stockhausen’s stage-directions are perhaps only fully realisable via projections or on film. 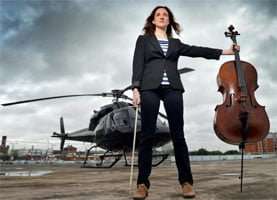 However, Vick’s more earthly approach was extremely effective in its own way. The electronic music (to be heard again as ‘Wednesday Farewell’) delineates these spaces so unerringly, and the mixed age, race and gender members of Birmingham Opera simply acted them out. So a “swimming pool with elephants” was a paddling pool in which the indefatigable Andrew Connington played trombone and splashed about, and the market in Marrakesh was suggested by people riding piggy-back as if atop a camel (unwittingly anticipating the arrival of the adorable Luzikamel in scene 4?).

One of the great strengths of this production was the fact that, at times, it was very funny. Much of this scene certainly was, with an endearing, playful quality about it. Something altogether less sinister than the description by Robin Maconie in his definitive book about Stockhausen’s music (Other Planets; Scarecrow Press, 2005) – where the instrumentalists are described as “insects, microbes, small scale living creatures after the manner of Messiaen’s birds.” 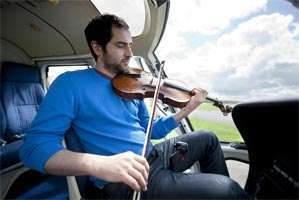 After some indoor flying, we experienced the real thing. The members of the Elysian Quartet were introduced to the audience by the Moderator, and we watched them – on four huge screens – driving to the appointed place and entering the four helicopters, taking off and then playing airborne.It was an astonishing experience. If one hadn’t known it was happening in real-time, it could easily have been believed that the performance had been pre-filmed. The players appeared to be utterly unfazed and played the music (which imitates the sound of the rotor-blades) most compellingly. Indeed, I thought the performance more persuasive than the recorded ones I have heard from the Arditti Quartet, which gave the world premiere. On their return to the auditorium, players and pilots had a question-and-answer session with the audience.

The role of the Moderator at the first performance was undertaken by Stockhausen himself. On this occasion, we had DJ Nihal who struck the only false note in this long evening. His approach was that of a game-show host and was puerile and irritating in the extreme.

‘Michaelion’ is the final and longest scene and “a galactic centre for delegates of the universe”.Like ‘World Parliament’, ‘Michaelion’ features a substantial part for a chorus and the members of London Voices were also terrific. They were required to be very physical, with much running about, but the strength of their singing was unimpeachable. This is music of extreme complexity. One passage reminded – in terms of density of texture – of the choral writing in Schoenberg’s Moses und Aron which also, in a traditional staging, features a camel. 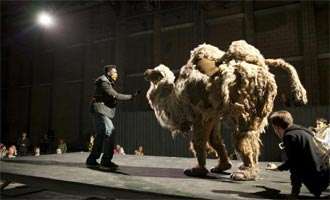 Luzikamel is a most endearing creation with its singing, speaking and movement – superbly realised by Marie-Louise Crawley and Nathan Lafayette inside the costume and Michael Leibengut’s sonorous bass who eventually emerges from the camel’s stomach and assumes the role of Operator. His function is to “concentrate on the reception of short-wave messages from the beyond, which he imitates and transforms.”

After the frenetic pace of the scenes featuring Luzikamel, the music becomes ever-more tranquil and at the end we are left to ponder Stockhausen’s final message: “Mankind, hear: MICHAEL EVE are healing the WORLD, LUCIFER will be brought around through the music of LIGHT … Blessings bring praise. Praise, gratitude for the miracles of the stars, planets.”

Gratitude too to those who enabled this important premiere to happen. Having now seen three Licht operas staged, I am more than ever convinced that, fascinating as they are as an aural experience in recordings supervised by the composer, these works need to be seen as well.It was 1985 when the first opera – Donnerstag – was staged at the Royal Opera House. I hope we do not have to wait the best part of another thirty years before we can experience other parts of the cycle in fully-staged performances.

In the meantime, this production will linger long in the memory. Kathinka Pasveer (Stockhausen’s long-time associate and collaborator), Graham Vick and his redoubtable company can surely be well-pleased with their work on Mittwoch aus Licht.

Ian Foster plays tuba with Birmingham Opera Company, in the world premiere of Mittwoch. Ian is playing the EEb tuba from Wessex Tubas