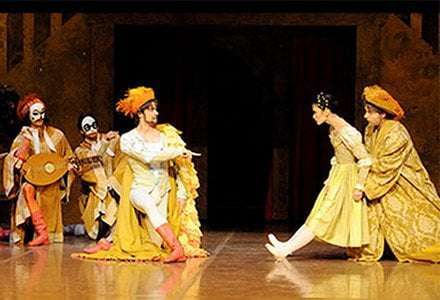 For the second offering of its all-too-brief London visit, Stuttgart Ballet presented a mainstay of its repertoire, John Cranko’s comic ballet The Taming of the Shrew. Since its creation in 1969, it has been an audience favourite, which despite having been acquired by London Festival Ballet (now English National Ballet) and The Royal Ballet, has never set down roots in the UK. This is a pity, because there are precious few good comic works in the repertoire, and this one by Cranko, a few cavils apart, continues to raise laughs. Largely following the Shakespeare narrative, Cranko drew on the experience of his light-hearted early works in England (Pineapple Poll, The Lady and the Fool) to create a two-act evening as a showcase for the superlative talents of Richard Cragun as the swaggering Petruchio and Marcia Haydée as Kate, the eponymous Shrew.

The ballet zips along, save for a few longueurs of roistering corps de ballet work, and is done and dusted in just over two hours. Cranko captures an Elizabethan bawdiness in his telling of the tale, unafraid to get his dancers to waggle their behinds and to introduce a degree of lewdness to their gestures. It is all good fun, even if it is saddled with Kurt-Heinz Stolze’s noisy arrangement of Scarlatti, the absence of any big musical themes making itself felt. That said, the assembled orchestra under Wolfgang Heinz’s energetic baton certainly pushed things along – it was gratifying, in an era of ever slower tempos for Classical Dance in the UK, to see the dancers of Stuttgart Ballet move, and move with speed. And what dancers – this is a fresh and characterful ensemble, full of keen and alert artists who are ready to enjoy their moment in the spotlight. Apart from the central couple, Shrew offers many opportunities for vignettes, not least Bianca’s three suitors, Arman Zazyan in particular a delightfully preposterous Gremio. I admire Marijn Rademaker’s lyrical qualities, and note happily that he brought both strength and grace to the beautiful Act Two Bianca/Lucentio pas de deux, his feet beautifully pointed in entrechats six, his jumps light and airy. Of particular note also was Daniel Camargo, a perfectly proportioned young dancer whose stellar rise to the rank of Principal has taken just four years and who, on this occasion, danced impeccably in the Act Two pas de six.

As Kate, Sue Jin Kang was a delight, exulting in the opportunities to ‘camp it up’ as the impossibly badly-behaved virago. She brought much nuance to her ‘taming’, her facial expressions conveying her confusion as she starts to realise that she is falling for her ‘tamer’. Her dancing was equally well judged, and she brought real physical abandon to the three great pas de deux, her trust in Filip Barankiewicz’s partnering absolute. These pas de deux are extraordinarily challenging – Cranko was fond, some say overly so, of complicated lifts, and in 1969 his lead couple of Haydée and Cragun were at the height of their powers and their ability to do almost anything. The result is pairwork which at times is almost perverse in its difficulty and recklessness. Done well, as it most certainly was here, it is, however, undeniably exciting as Kate is lifted, twisted and thrown with almost frightening insouciance. Barankiewicz is a superb Petruchio, abounding in silent guffaws of hands-on-hip manly laughter and exuding a chortling bonhomie. His dancing is strong and virile (he did not shirk the triple tours en l’air) and his partnering was unflagging. He is an actor-dancer fully in the Stuttgart tradition, the sort that is all too rare nowadays, so I learned with some sadness that he commences his retirement from full-time dancing at the end of this current season.