Bernstein
On the Town, A Musical Comedy in Two Acts – Book & Lyrics by Betty Comden & Adolph Green based on an idea by Jerome Robbins; orchestrations by Hershy Kay, Don Walker, Elliott Jacoby, Ted Royal & Bruce Coughlin, with the composer 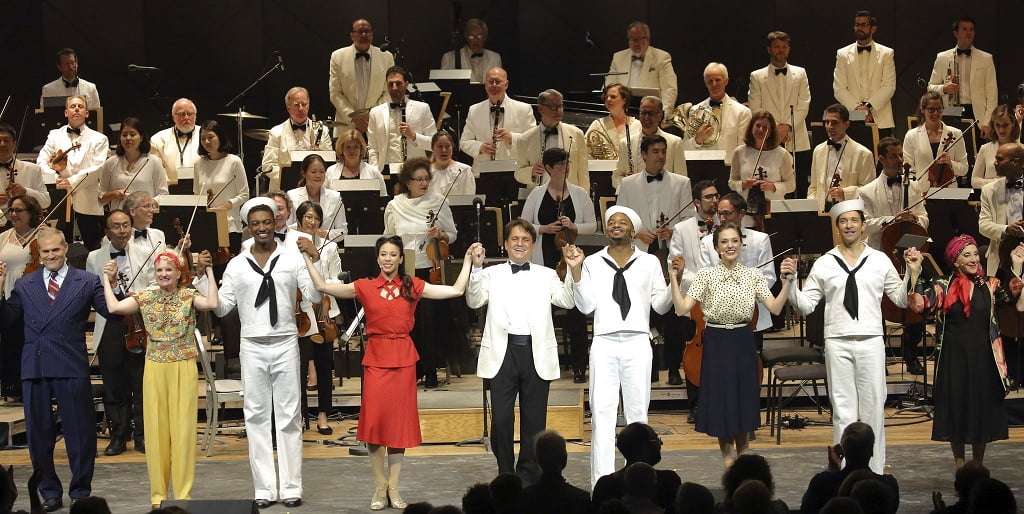 It is fitting for Tanglewood to host a celebration of the Leonard Bernstein centennial, since he played a major role in the development of this great music center, and it in turn was instrumental in his career development. His Tanglewood activities spanned a half-century, from his joining the inaugural class of the Berkshire Music Center in 1940 as a student of conducting (with Serge Koussevitzky) and composition (with Aaron Copland), to the last concert he conducted there in 1990, two months prior to his death. To launch this “Bernstein Centennial Summer”, Keith Lockhart conducted members of the Boston Pops Orchestra in a delightful production of On the Town, Bernstein’s first Broadway show.

On the Town was conceived by Bernstein and Jerome Robbins after their successful collaboration on the ballet Fancy Free, expanding on its storyline of three sailors on a one-day leave in New York City. Betty Comden and Adolph Green wrote the book and lyrics and also performed in the first production, which opened in December 1944 as World War Two raged in Europe and the Pacific. The protagonists will ship out again the next day, and the women they encounter in New York are eager for their company, but their poignant parting, ‘Some Other Time’, recognizes the uncertainty of the future that they – and everyone else – were facing.

We hear in Bernstein’s score jazz and swing – and intimations of sounds that would emerge later from the composer’s pen, including West Side Story; a fascinating mixture of symphonic and jazz elements. Lockhart and the Pops (comprised largely of members of the Boston Symphony) blended these diverse elements superbly, especially in the ballet sequences, most of which became interludes here. This is unfortunate, since the prevalence of dance is really the defining characteristic of On the Town, building on what Rodgers & Hammerstein had done in Oklahoma! the year before. There still was some excellent dancing though, most notably by Georgina Pazcoguin, from New York City Ballet.

Brandon Victor Dixon was outstanding as Gabey, giving moving accounts of ‘Lonely Town’ and ‘Lucky to Be Me’ as well as the recurring ‘Gabey’s Comin’, which had been cut from the Broadway run. Gabey’s search for the elusive Ivy Smith, whose image he had glimpsed on a “Miss Turnstiles” poster in the subway, is at the center of the rather thin plot, but his shipmates have far more interesting encounters. Ozzie, who is looking to make out sexually, and anthropologist Claire de Loone are instantly ‘Carried Away’, while Chip, who plans to see the sights listed in his out-of-date guidebook, is seduced by the aggressive cabdriver Hildy, whose ‘Come Up to My Place’ and ‘I Can Cook Too’ proved hilarious.