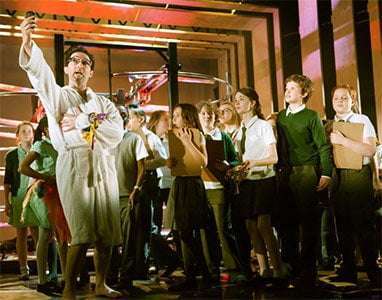 The Crackle is the second of two short operas commissioned to reflect modern reactions to the Faust myth, and is created almost entirely by Matthew Herbert. Overtly integrating current technology into the score, plot and performance, Herbert conjures a contemporary demon, hidden in, and perhaps even born out of, the plethora of IT devices we unthinkingly now have in our lives.

In terms of plot, this proves a bit surreal. We open with George (Andrew Dickinson), an overly-typical music teacher, receiving an award for his work and recognition for a book he has written. Almost immediately, we find ourselves in the school toilets, where we hear through a (presumably intentionally) badly distorted recorded voice that George is due to lose his job as a result of cuts. Susanna (Stephanie Marshall) hears this too, and warns George, who is absorbed running the school radio station. This gives Mephistopheles (a pre-recorded Bryn Terfel) his opportunity, and he phones-in to the programme, explaining that a Smartphone app he has created will solve all of George’s problems, if he in turn agrees to raise money for a vaguely-defined charity.

Passing through a room of brightly-coloured bottles of unknown purpose (other than, we discover in the programme, much of the show’s sound-design came from them), George is instructed to download the app Chirp. Lo and behold – as an audience we too were instructed to download Chirp before the opera. It’s uncanny. Introducing the app to his pupils (the Royal Opera’s own Youth Opera Company) their lives are instantly transformed into utopian bliss, where no lesson is ever dull, and their phones glow with the promise of web-codes, access to portals and all manner of exciting technological gewgaws.

As a break from this relentless happiness, we find George in his bath (filled with plastic bottles, of course) and Susanna arriving for dinner, summoned by a mysterious Chirp message. Long story made short – George falls asleep, Susanna leaves, and we’re back at the school, where a mysterious machine has appeared (the sound-artist Andy Cavatorta’s “The Dervishes” – a set of spinning resonating tubes). This pushes the pupils to new heights of ecstasy, and we arrive at the ‘charity concert. The pupils sing, the music becomes suffused with interference, the children fall dead one by one, and Susanna can’t get through on the phone. It transpires that the demon was after the children all along. 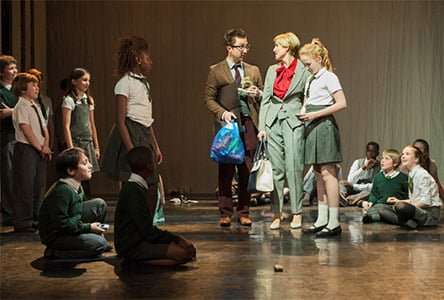 This mildly unusual plot appears to operate on a fairly obvious level, as a vehicle for technological elements. Once Chirp was installed on our phones, a series of digital bleeps played over the music triggered the download of message, which showed us what the characters were up to at the time, and explained a lot of the plot. After a short delay in starting the opera, we were told there were technical issues (!) and that we might resolve these by logging our devices onto a different network. After this, the action was suffused with the constant cheeping of phones as messages arrived. So far, so good: to an extent. In fact, to receive all of the messages, I had to strike up an allegiance with the person seated next to me, and we managed to piece it together. At one apparently vital moment, my phone delivered me the message “oh dear – something seems to have gone wrong – unable to retrieve chirp.” I also appeared to be sent a few plot-spoilers early, as well as repeats of some messages.

It also turns out that there is a reason we should switch off phones during theatre and opera performances. Around me people were constantly dropping their devices, receiving other texts, reading out the plot messages to their technophobe neighbours and, very irritatingly, lifting their glowing instruments into the air to record The Crackle for posterity.

Compared to this, the set itself was incredibly sparse, although effective. The pared-back use of furniture served to emphasise the complexities of the supernatural machines, and made the rare use of bright colours almost shocking, whilst also bringing us suggestions of a school environment. Sound-responsive video of block-patterns seemed a throwback to the early days of computing, perhaps reminding us how far we have come since then.

Herbert’s score, broadly minimalist, provides the ideal sonic partner to this aesthetic. With shadows of Philip Glass, but with more harmonic and melodic interest, the vocal lines appeared subservient to the repetitive harmonic structures. The use of electronically-reproduced sounds, many with hints of white noise, provides added tension, danger omnipresent, while the never-seen demon is effectively represented by the addition of footsteps and breathing.

The libretto efficiently conveys the increasingly strange plot, with the only weak spot being the continual presentation of the sort of platitudes that rightfully belong on the Internet next to pictures of sunsets or kittens. At various times, for example, we are told: “Music is our destiny”, “the world needs art more than war”, “death is just a few bars rest” and “a morning is a day in waiting.” Well! This has echoes in the later operas of Michael Tippett. The craft is there, the music capable of sustaining real beauty (as Herbert’s does in the final scene of, well, child slaughter), but the enterprise is tinged with pseudo-moralistic fervour and attempts to force preconceived elements into the action. That aside, Herbert’s music is involving, beguiling and effective, and the use of technology thought-provoking. That thought, like the legend of Faust himself, hovers around the tricky question of who is fooling who…