Handel
Belshazzar – Oratorio in three Acts to a libretto by Charles Jennens [sung in English, with English surtitles] 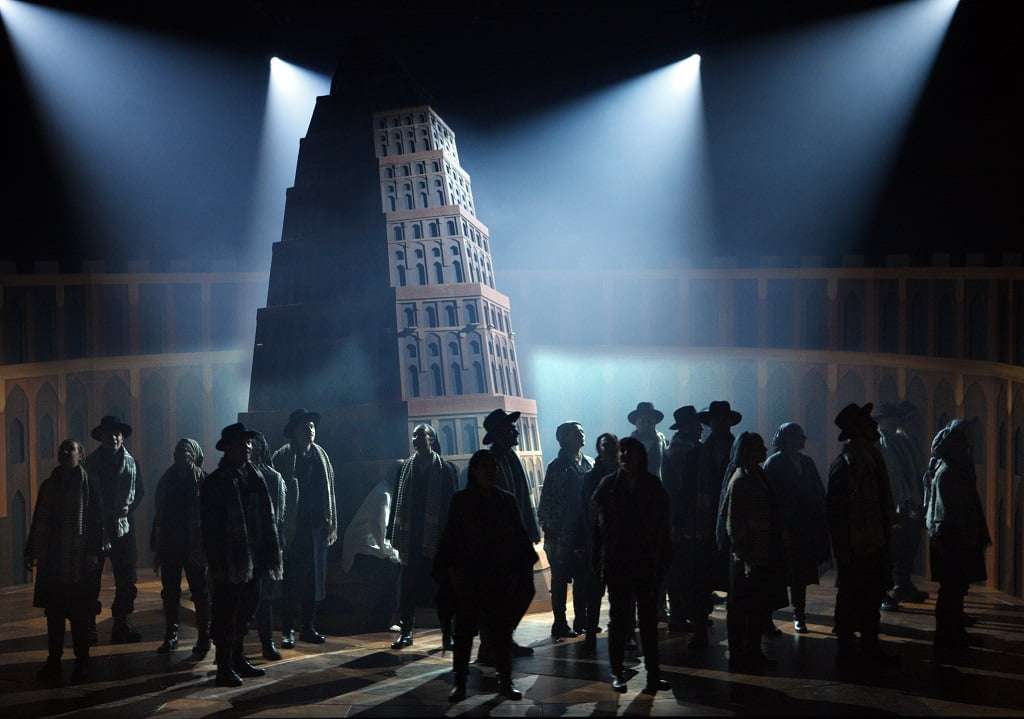 Daniel Slater’s astute production of Handel’s Belshazzar (an oratorio and not originally intended for staging) dynamically and imaginatively aligns both the Biblical basis of the work (whose narrative tells of the fall of Babylon and the liberation of the Jews, at the hands of the Persian king, Cyrus) with what seems to be an oblique comment upon the current, ongoing struggle for control in the Middle East. The emotional focus falls upon Belshazzar’s mother, Nitocris, who is seen grieving for her dead son at the beginning and at the end of the work, and she appears to stand in metaphorically for the fate of the region generally (Babylon, it will be remembered, lies in modern day Iraq) – as both the Jewish prophet Daniel, and Cyrus harbour romantic interests in her (facets of this production which are not given in Charles Jennens’s libretto, although she does take seriously the claims of the Jews that their God will eventually avenge himself on the blasphemous Belshazzar).

The set is dominated by the huge wall encircling Babylon which looks impregnable against attack by the Persians, though the city is eventually broached through the assistance of the renegade Babylonian, Gobrias. In any case, this apparent war of liberation is shown up for the violent power-grab all such battles usually turn out to be, as the Persians wield menacing daggers in ironic counterpoint to their chorus at the beginning of Act Two where they anticipate victory and freedom. The appearance of the captive Israelites behind the high battlements of Babylon, clad as contemporary Orthodox Jews, reminds us that Israel is emphatically not the oppressed of the Middle East today, as the modern state now constructs obstructive walls – and Trump Heights – in its turn, as an expression of invidious power, just as the contemporary counterpart to its guardian Persians, America, does to keep Latino migrants at bay. But it must also give a British audience pause for thought that Brexit is likely to result in the establishment of at least a legal and cultural wall between Northern Ireland and Eire, if not a physical one; and also, generally, that the eighteenth-century identification of Protestant England with the embattled Biblical nation of Israel (which finds expression in many of Handel’s oratorios) constitutes one strand in the questionable historical narrative of political exceptionalism which has poisonously fed the present crisis with respect to Europe. 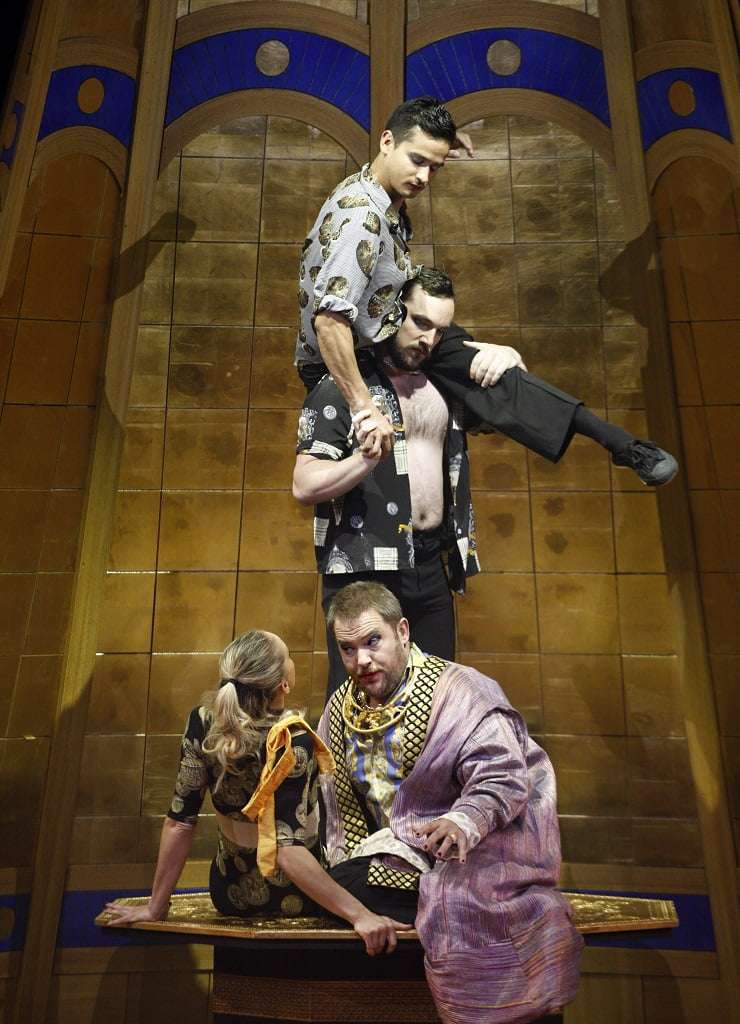 Those divisions between nations is further suggested by the way that the ziggurat which lies behind Babylon’s walls revolves to reveal Belshazzar’s throne and palace of pleasure where his infamous feast takes place, harks back to the Tower of Babel in the book of Genesis. Just as that incited God to punish humankind for their ambitious, collaborative endeavours by creating incomprehension among them through the adoption of an array of different languages, so the mysterious and disconcerting words “mene, mene, tekel, upharsin” are written on this skyscraper here, which only Daniel is able to interpret.

Tim Claydon’s dynamic choreography consistently engages the attention with the chorus making some deft transitions between the crowds of Jews, Persians, and Babylonians, first appearing up on the ramparts to taunt Cyrus in a viciously delivered musical attack. They form a pullulating orgy in Belshazzar’s palace as they give themselves over to the pleasures the king encourages, but then form a disciplined crew as the Persian army. It’s a delicious irony that the long interval for the audience’s supper falls just as the Babylonians prepare for their fateful feast. Three acrobats offer additional visual diversity, enhancing the spectacle on display in the Babylonian palace, but their precarious balancing acts also serve as a telling representation of the precipice on which Belshazzar’s regime is poised throughout the drama.

The musical performances are mixed, but never less than good. Robert Murray’s interpretation of the title-role depicts the king as ill-at-ease from the start, and like a wild animal, taking its cue from the description of him in one of the choruses as a “human beast”. Accordingly he tends to declaim the part, rather than always deliver it strictly musically, but there remains a dimension of human vulnerability underneath. Claire Booth’s Nitocris is vocally unsteady in her opening scene, as she reflects on the instability of all earthly empires, with some words not clearly enunciated, but her performance acquires greater assurance and character. Christopher Ainslie is dependable enough as Cyrus, although in an essentially military role, one might expect more assertive authority. It falls to James Laing in the other countertenor part, Daniel, to provide a more arresting and secure account that grips the attention with the clear focus and quietly penetrating tone of his delivery. The Gobrias of Henry Waddington is somewhat wooden and inscrutable, but he certainly despatches sufficient heft. 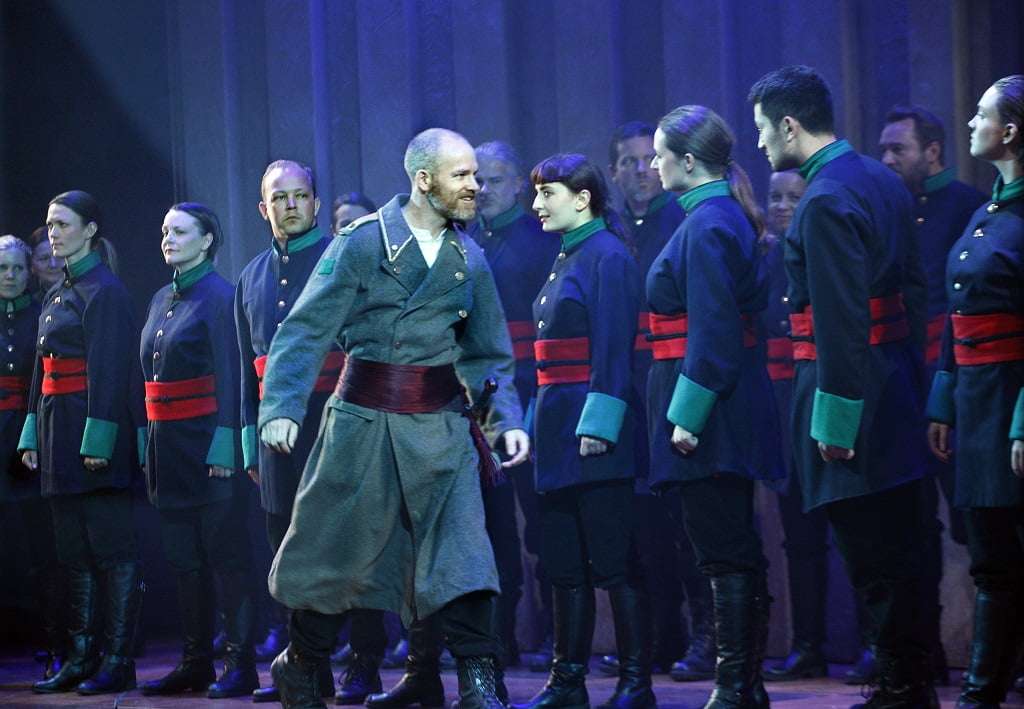 The real musical star, however, is The Sixteen chorus, its members managing the transitions between the three different nations they represent with the same compelling vigour in their crisp and alert singing as in their scene and costume changes. Their experience in performing earlier a cappella music pays dividends here, as they bring clarity to Handel’s contrapuntal textures, alongside a palpable dramatic urgency that drives this performance compellingly. Harry Christophers conducts the orchestra of The Sixteen with equal alacrity; even if the performance falls back occasionally to a routine plod through some numbers, lacking some nuance, there is no doubt as to the general impetus of the score.

Overall this is a conspicuous success for the increasingly rewarding habit of theatres to stage Handel’s Biblical epics, revealing his dramatic genius to be at least as potent in his oratorios as in his operas.