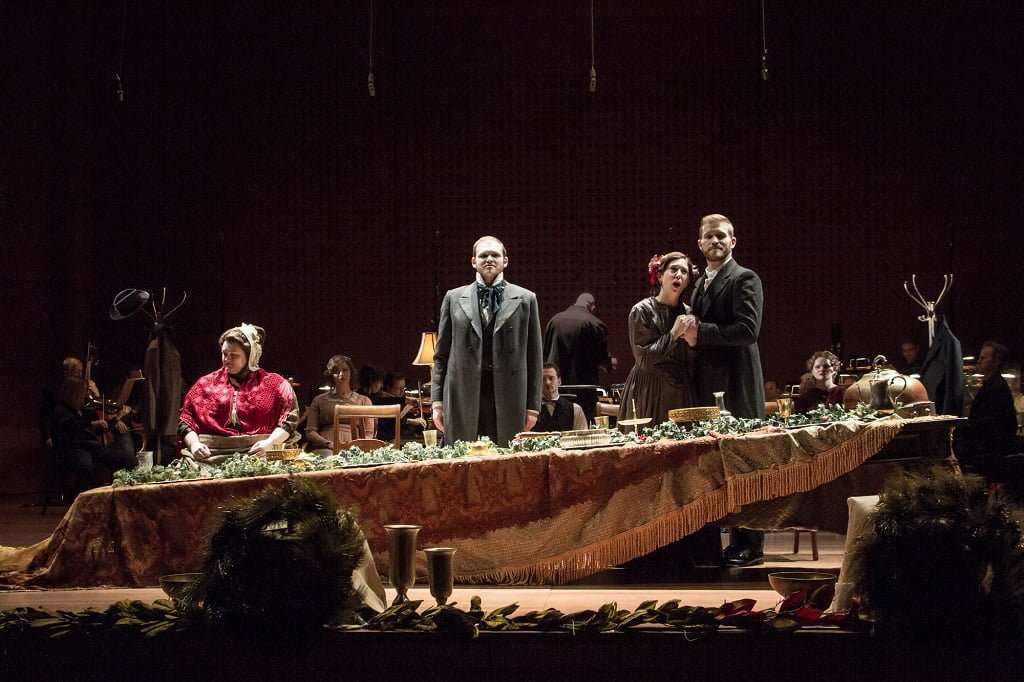 To borrow from Longfellow, hardly a man is now alive who remembers the premiere of Thornton Wilder’s The Long Christmas Dinner – at Yale University in the early-1930s, but everyone who is artistically aware has memories of its spawn, the scene in Citizen Kane where Orson Welles sits at one end of a ridiculously long breakfast table with Ruth Warrick at the other and flashbacks recount the troubled history of their marriage. Welles, an infamous prevaricator, reminisced about this amazing bit of celluloid by saying that he “unconsciously” stole it from his playwright friend. Paul Hindemith, himself eventually a professor at Yale, fashioned a musical work in English after the play and Leon Botstein, intrepid explorer of our rich musical heritage, here mounted the Play and the Opera.

Members of the generation that attended American secondary schools in the 1950s and 1960s tend to infantilize Wilder because of the propensity of their drama instructors to stage innumerable productions of Our Town (or, as an alternative, Rodgers & Hammerstein’s Carousel, itself borrowing from Wilder). Today the works may seem dated or nostalgic, depending on the effects of childhood memories. By presenting an original play and then the opera that it inspired, Botstein is granting us all a peek at creative evolution within a classic mise en abyme technique. The material is interesting, the process is fascinating.

The Play is a memento mori on the subject of time. Revealed – there is no curtain at Alice Tully – is that long table with the legs collapsed on the stage-right side, leaving the distinct impression that all is either uphill or downhill (either direction works contextually). Stage-left holds a baby-carriage; stage-right an ancient rattan-backed wheelchair. The characters move down the table as they age and then disappear. We are somewhere in the Great Plains and the folks tell the same stories over and over again in the period from circa 1840 to 1930. The dinner may be long, but the play is thankfully short. I have no pretentions as a theater critic; let’s just say that the distinct ‘amateur dramatics’ feel of the piece is more the burden of Wilder’s dialogue than any individual actor’s shortcomings. 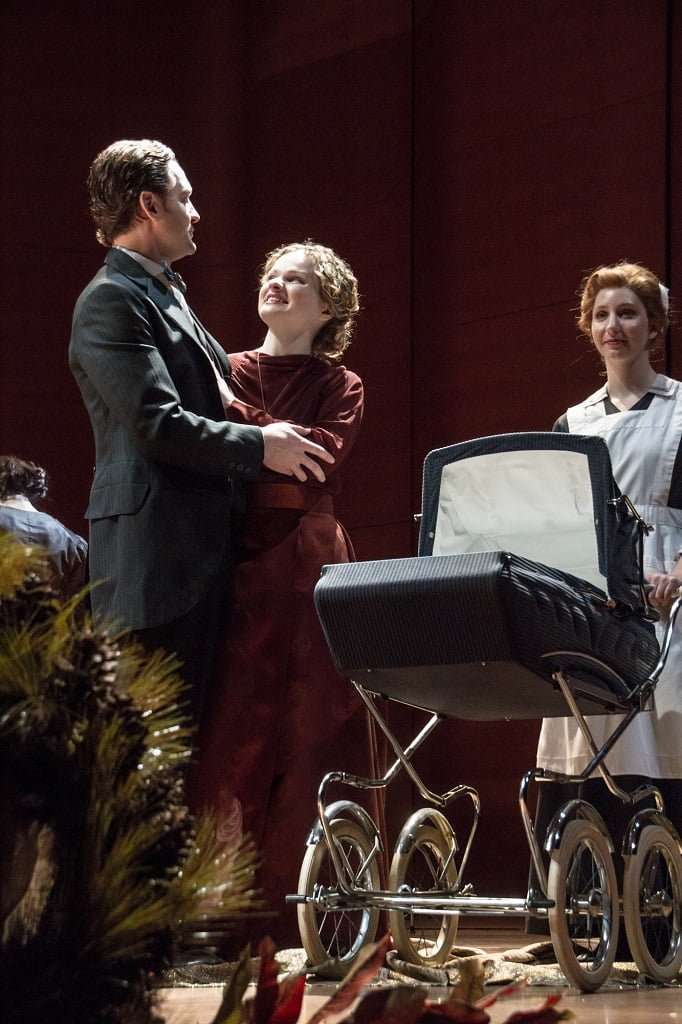 Gustav Mahler once visited Amsterdam where Willem Mengelberg arranged a concert wherein his Concertgebouw Orchestra performed the relatively new Fourth Symphony in the first half and then after intermission gave the piece a second time. After sixty years of listening to concerts, I finally felt at least a hint of what that Dutch audience must have experienced, as hearing a totally unfamiliar opera for the first time, all of us in attendance were already aware of its basic plotlines and inner emotive purposes. That experience alone was worth the price of admission.

Hindemith’s Opera is harmonically uncompromising. He employs the harpsichord as a messenger from a bygone era, but this Mercury speaks with a modern vocabulary (compare Elliott Carter’s Double Concerto for piano, harpsichord, and two chamber orchestras, written during the same year of 1960 as the Opera). The interplay between character voices is much more eloquent than the drama’s rather stilted dialogue, as the composer has the advantage of relishing duets, trios and ensembles that the playwright does not. The power of music is transformative. Citing just one example, Claire Moodey struggled mightily with the dialect and accents of the matriarch in the Play, while Sara Murphy forcefully intoned her rich mezzo with enormous confidence in the Opera. The uniting and most memorable role across the two art-forms is the daughter who wants to go to Germany and study music – this from the Play long before Hindemith was involved in its creative process – but who remains seated at the table and never leaves.

Alice Tully Hall is not set up for opera. It is small and has no pit, so the American Symphony musicians were seated at the back of the stage. The performance was superb unfolding what is really a dance suite by Hindemith, the waltzes, folk-tunes and peasant-dances with a highly European flavor helping to enunciate the passages of cultures and enthusiasms through time. There are also no provisions for projecting titles, so we were free from the flashing bombardment of printed words besmirching the visual field incessantly (the Opera is in English after all). Hindemith and Wilder achieved the poignancy that the playwright, previously on his own, could not quite summon.

Hindemith wrote his Opera to English words, but it succeeded, if at all, in a German version (Das lange Weihnachtsmahl) for consumption in Europe. No recording has been made in English, but Botstein has plans to rectify that situation. We’ll put it on next year’s Christmas list.