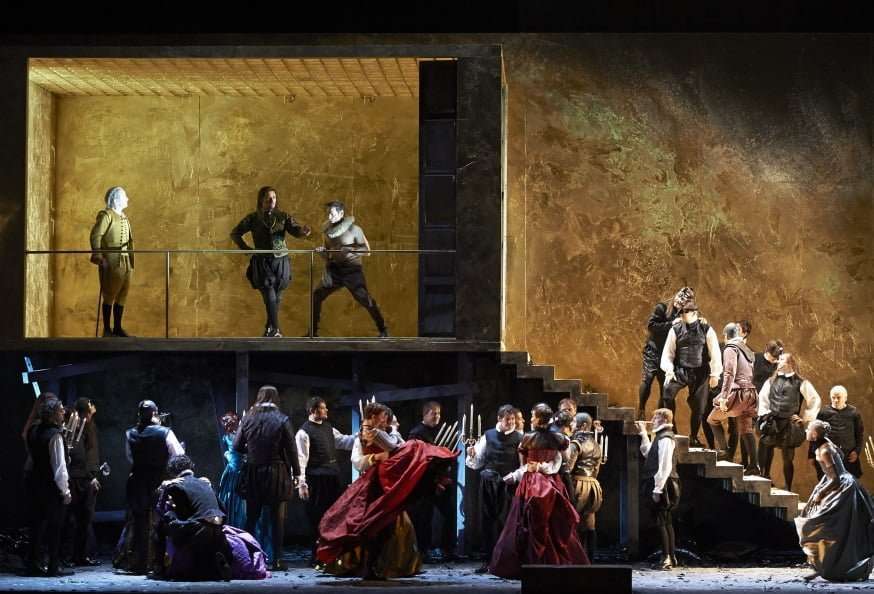 If not quite the live showing the Barbican Centre was trumpeting – this relay of Verdi’s Rigoletto from the Vienna State Opera was deferred by one hour (live-zeitversetzt as the German-language has it) – it was as good as, and turned out to be a really good show. Pierre Audi’s direction may invite some disquiet – just about everything to be seen is dilapidated, inhospitable and creepy, and who knows what will be made of the scenes featuring a sparse petrified forest and black-plastic rubbish bags (each full), or indeed Sparafucile’s curiously designed shack where Gilda meets her end instead of the Duke that the eponymous court-jester wants rid of.

But it works. Indeed it is a compelling production (sometimes reminding of David McVicar’s that has gone through several seasons at The Royal Opera), once passed the opening party scene that is, during which the guests hold their own candelabra. We are left in no doubt that the Duke of Mantua, sung by Piotr Beczala with rich tone and poised embellishment, is a swaggering womaniser who wants his way without care. He of course fancies Gilda, daughter of Rigoletto, not that the royal knows of the relationship, and it’s not long before Simon Keenlyside appears, tortured and raging, and cursed by Count Monterone, Sorin Coliban in full threat. Seemingly a simpleton, or at least perceived as such by those around him, Rigoletto (not sure about his ruff, but it gives Keenlyside something to violently remove in Act Two) meets assassin Sparafucile (implacably taken by Ryan Speedo Green), a man you can trust to take someone from the world, for a fee … another day, another killing. 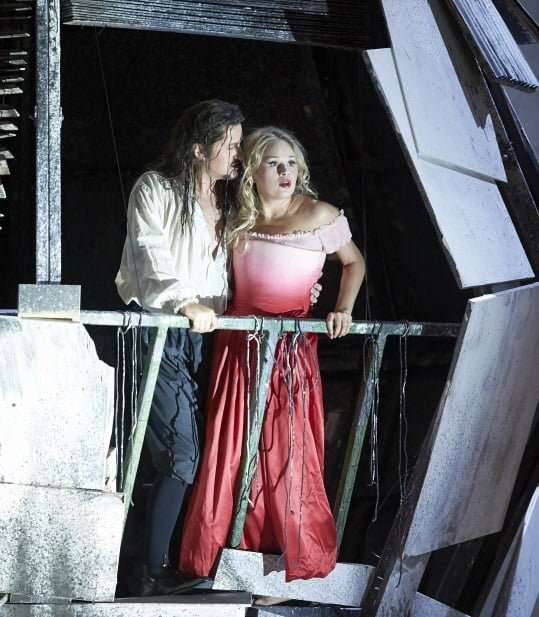 If Rigoletto, duped into helping his daughter being kidnapped, is made to look a buffoon, he is made of sterner if vulnerable stuff, and he genuinely loves and cares about Gilda, stifling her in many ways. She is beautifully portrayed – impetuous and sensitive – by Erin Morley who sings the role with poise, emotion and temperament (‘Caro nome’ is a poignant triumph for her). That curse will come true in the bitterest way when Sparafucile stabs her instead of doing Rigoletto’s murderous bidding. Keenlyside, as directed or maybe sometimes of his own volition, is very physical, emphasising the jester’s deformity, his paranoia and his wrath … and, not least through his eyes (the camerawork has many close-ups) and vocal charisma, his cherishing of Gilda. A surprise then that Keenlyside was unable to perform in Act III, loss of voice being cited, of which there had not been any suggestion prior to this moment.

Step forward Paolo Rumetz … he came straight into character as if he’d been there all night. Vocally impressive, Rumetz was maybe less the actor than Keenlyside, yet somehow more fatherly, but he also brought much nervous intensity to the hours counting down to when the assassin is supposed to claim the Duke … only when Rigoletto hears his boss reprising ‘La donna è mobile’ (stylishly delivered on its first appearance by Beczala) does he know that something has gone tragically wrong, a turnaround cued by Sparafucile’s sister Maddalena (Audi introduces her in Act One as a street-walker) who lets the Duke seduce her and then wants him saved; the assassin, being honourable, decides to murder someone else: it just happens to be Gilda banging on the door for shelter (much tempest from the orchestra). Discovering the bagged-up body to be his daughter, the closing scene with Rigoletto and the dying Gilda was very touching, with real chemistry between Morley and Rumetz before Myung-Whun Chung closed the opera with maximum and dreadful force. 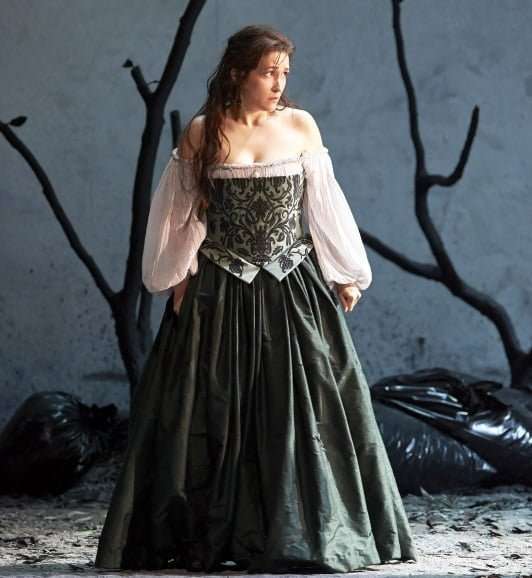 And it was Chung (replacing Franz Welser-Möst, who summarily resigned as Vienna State Opera music director a few months ago and with it withdrew from all future engagements there) who conducted marvellously, dark and dramatic from the off, terrific tension palpable throughout, the orchestral playing (whether tutti or solo, a heavenly cello obbligato in Act Two) simply superb in its unanimity, clarity of detail, rhythmic buoyancy and emotional power. The choral singing was commensurate in quality. Without overlooking a sway or a subtlety, Chung kept the opera urgently dramatic.

The sound and picture quality of the relay to this particular cinema were good, well-balanced, dynamic and in good perspective (the off-stage band). Unfortunately, Morley’s Gilda was prone to distortion throughout, sometimes excessively. No other singer was so affected, although some middle-register woodwind instruments also suffered this curiosity, albeit occasionally, which went unaccounted for and unchanged: whether a fault from base or exclusive to this outlet, or through a gremlin somewhere down the line, we may never know. It says much for the staging and the performances that what might have been a severe spoiler could be overlooked (just) because of the artistic excellence.

Hoping that Simon Keenlyside will recover soon – but Paolo Rumetz is first-class cover – habitués of and visitors to Vienna should certainly make it along to the State Opera’s Rigoletto – Audi, Chung and these singers make a very productive team and this opera-in-cinema experience was quite something.