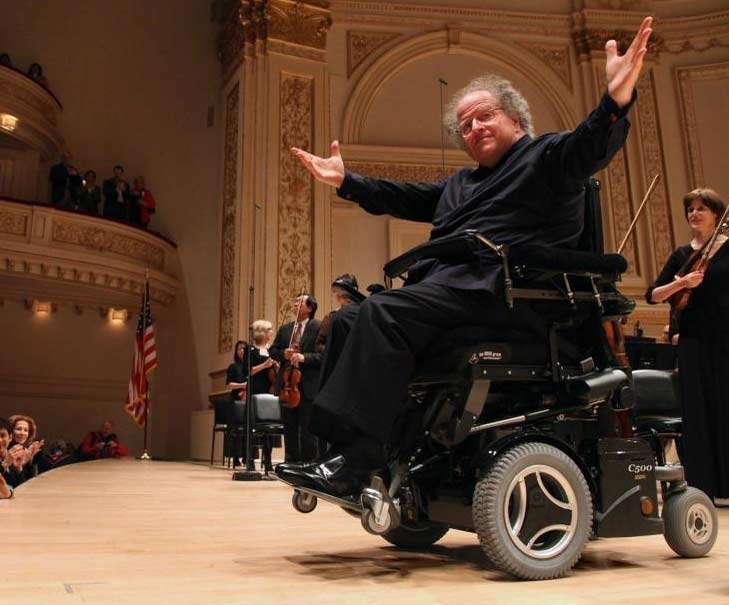 The pairing of works by Mozart and Mahler is quite suitable for The MET Orchestra. Mozart’s operas have been a mainstay of the Metropolitan since its inception in 1883, and Mahler was one of its greatest conductors, leading 54 performances during his brief tenure. James Levine has continued the tradition of taking The MET Orchestra out of the pit and onto the concert stage, undaunted by what might have been a career-ending disability. It is a world-class orchestra. The violins’ tonal purity, the woodwinds’ effervescent articulation and the brasses’ full-blown brilliance were evident throughout this concert.

Maurizio Pollini opened the program with Mozart. His rather straightforward, somewhat detached approach to this work fitted well with Levine’s own. They both emphasized contrasts in dynamic levels. The martial grandeur of the first movement’s opening theme was enhanced by forceful treatment. The diverting appearance of a theme in G minor went by without the slightest effort to attract attention to it. Little need be said about Pollini’s masterful technique, which has not diminished with age. He glided effortlessly over the keys and did not linger over the heavenly theme in the second movement, which serves the film Elvira Madigan. Pollini’s soft, tender treatment captured the music’s graceful elegance. The lively finale whizzed by, Pollini articulating the stretches of sixteenth-note runs immaculately.

Mahler’s valedictory Ninth Symphony followed intermission. Levine is a dedicated Mahlerian. His approach is structurally seamless and musically precise, with a concentration on eliciting dramatic power. Particularly noticeable was the sometimes characteristically heavy-handed use of percussion, which served well to underline motifs (from timpani, for example) but not when the tam-tam buried the low-brass fff outburst of the Symphony’s opening motto (at the climax of development section). Balances became a problem during high-power segments in this first movement, brass stifling strings. But it is one of the most difficult to put across both technically and dramatically. So much happens during this one-half-hour, often in contrapuntally dense profusion, that many conductors are satisfied to concentrate on accuracy and let the music speak for itself. While such an approach might work, it often results in note-spinning and lacking subtlety. Although some passages were exactly this, for the most part Levine elicited enormous power during major climaxes and tenderness in reflective passages.

Levine heightened the contrast between the rustic Ländler which opens the second movement, played with vivacity by the woodwinds, and its antagonist, the aggressive, increasingly arrogant Waltz subject. Both of these themes are in turn pitted against a third theme, another Ländler, this time caressing. During the middle section, when these themes engage in what seems like a life-and-death battle for supremacy, a sense of the inanity of life’s struggles comes through with marked emphasis. Levine’s excellent balancing of inner voices enabled thematic fragments to reach out from the welter of contrapuntal profusion. Also apparent was the feeling of exhaustion that overwhelms the dances.

In the ‘Rondo-Burleske’ movement, Levine pumped up the tempo to a frenzy making the demonic fury of the opening sound even fiercer and more terrifying than usual. When this chaotic scherzo gives way to a heart-warming section, Mahler introduces a theme in the E-flat clarinet that in the finale he will transform into one of the most heavenly of melodies. Levine elicited uncertainty as the music slowly and subtly approaches the reprise of the opening music only to dive into it full of vim and vigor. Somehow, Levine managed to up the pace in increasingly faster segments, as Mahler instructs. The MET Orchestra was up to it, articulating this mad dash to the final snap brilliantly.

There follows the remarkable, slow, finale, a prayer for relief and redemption. Levine and the MET Orchestra gave a deeply expressive reading, set in a broad but not lingering tempo, its first theme enhanced by rich string sound that sometimes gave the impression of weeping, and by finely wrought articulation. The second theme was beautifully played by the principal horn, Joseph Anderer. Although the denouement after the climactic segment that ends the exposition was somewhat disjointed, the wavering thirds in harp and clarinet that open the development (a reference to ‘Der Abschied’ from Das Lied von der Erde) sounded like a call from the wilderness. As this section progressed, what should be a sense of underlying urgency did not become apparent until the redemptive horn-call that precedes the climax of the movement. Consequently, this soulful music seemed somewhat stagnant. At the climax the repeated C-flats played fff by violins is always difficult to recognize as a double augmented version of the motto with which the symphony opens. No less so in here despite an admirable effort by Levine. After a stirring reprise, the musical material gradually dissolves during which a quote from Kindertotenlieder (fourth song) seems to take us to an otherworldly plane. The Symphony slowly dissolved into silence. Levine held back the applause by keeping his baton uplifted for some time.