Skip to content
LnRiLWNvbnRhaW5lcltkYXRhLXRvb2xzZXQtYmxvY2tzLWNvbnRhaW5lcj0iNmIzNDMzNmNmZTc3NWZiNGJlMTVjMmIwMzU3NWM1MjYiXSB7IHBhZGRpbmc6IDI1cHg7Ym94LXNoYWRvdzogNXB4IDVweCAxMHB4IDAgcmdiYSggMCwgMCwgMCwgMC41ICk7Ym9yZGVyOiAycHggZG90dGVkIHJnYmEoIDEwOSwgMTA4LCAxMDgsIDEgKTsgfSAudGItZmllbGRbZGF0YS10b29sc2V0LWJsb2Nrcy1maWVsZD0iODM3Y2ExZjc0MGRjZDdkOTdlMzQzOWMyYjIwMWZmZTMiXSB7IGJhY2tncm91bmQtY29sb3I6IHJnYmEoIDIzOCwgMjM4LCAyMzgsIDEgKTtwYWRkaW5nLXRvcDogMTBweDtwYWRkaW5nLWJvdHRvbTogMTBweDtwYWRkaW5nLWxlZnQ6IDEwcHg7IH0g
LnRiLWNvbnRhaW5lcltkYXRhLXRvb2xzZXQtYmxvY2tzLWNvbnRhaW5lcj0iNmIzNDMzNmNmZTc3NWZiNGJlMTVjMmIwMzU3NWM1MjYiXSB7IHBhZGRpbmc6IDI1cHg7Ym94LXNoYWRvdzogNXB4IDVweCAxMHB4IDAgcmdiYSggMCwgMCwgMCwgMC41ICk7Ym9yZGVyOiAycHggZG90dGVkIHJnYmEoIDEwOSwgMTA4LCAxMDgsIDEgKTsgfSAudGItZmllbGRbZGF0YS10b29sc2V0LWJsb2Nrcy1maWVsZD0iODM3Y2ExZjc0MGRjZDdkOTdlMzQzOWMyYjIwMWZmZTMiXSB7IGJhY2tncm91bmQtY29sb3I6IHJnYmEoIDIzOCwgMjM4LCAyMzgsIDEgKTtwYWRkaW5nLXRvcDogMTBweDtwYWRkaW5nLWJvdHRvbTogMTBweDtwYWRkaW5nLWxlZnQ6IDEwcHg7IH0g
Berg
Lulu – Opera in a Prologue and three Acts to a libretto by the composer after the plays Erdgeist and Die Büchse der Pandora by Frank Wedekind [performed with Act III realised by Friedrich Cerha; sung in German, with English titles]
LnRiLWNvbnRhaW5lcltkYXRhLXRvb2xzZXQtYmxvY2tzLWNvbnRhaW5lcj0iNmIzNDMzNmNmZTc3NWZiNGJlMTVjMmIwMzU3NWM1MjYiXSB7IHBhZGRpbmc6IDI1cHg7Ym94LXNoYWRvdzogNXB4IDVweCAxMHB4IDAgcmdiYSggMCwgMCwgMCwgMC41ICk7Ym9yZGVyOiAycHggZG90dGVkIHJnYmEoIDEwOSwgMTA4LCAxMDgsIDEgKTsgfSAudGItZmllbGRbZGF0YS10b29sc2V0LWJsb2Nrcy1maWVsZD0iODM3Y2ExZjc0MGRjZDdkOTdlMzQzOWMyYjIwMWZmZTMiXSB7IGJhY2tncm91bmQtY29sb3I6IHJnYmEoIDIzOCwgMjM4LCAyMzgsIDEgKTtwYWRkaW5nLXRvcDogMTBweDtwYWRkaW5nLWJvdHRvbTogMTBweDtwYWRkaW5nLWxlZnQ6IDEwcHg7IH0g 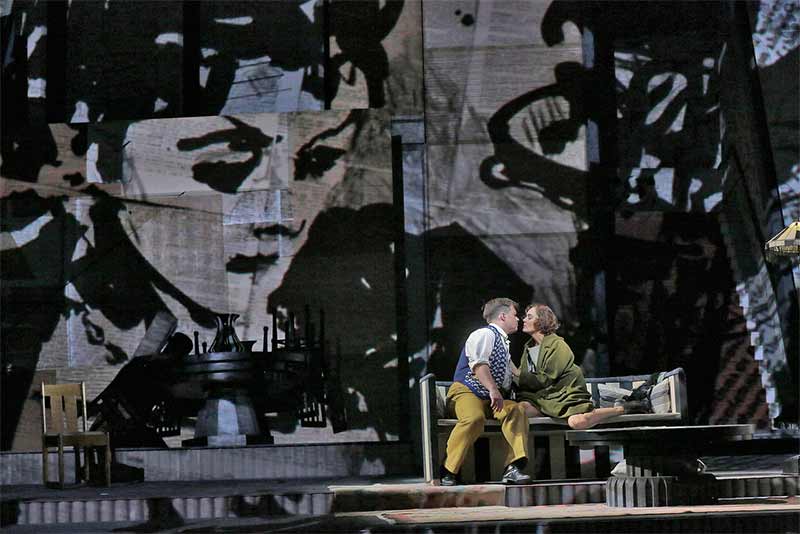 William Kentridge and the creative team behind the highly successful production of Shostakovich’s The Nose have returned to the Met with an even more monumental project, Alban Berg’s Lulu, and it is an unqualified success in this co-production with Dutch National Opera and English National Opera. An exceptionally strong cast includes Marlis Petersen as Lulu, the signature role she plans to now retire. Berg’s fascinating score was superbly played, masterfully conducted by Lothar Koenigs (Music Director of Welsh National Opera), who stepped in a month before opening night (which was the 5th) to replace the currently overextended James Levine.

Virtually – and often literally – overshadowing the performers are Kentridge’s drawings, animations, videos and typography that function as settings, backdrops and commentary, and also form part of the film – called for by the composer – that links the two halves of Lulu’s story, her rise and her fall, corresponding respectively to the two plays by Frank Wedekind, Earth Spirit and Pandora’s Box. The staging makes effective use of sight and sound to portray the linkage between sex and money that lies at the heart of the opera.

Sabine Theunissen’s art-deco-influenced set provides large walls and sliding panels onto which are projected the visual elements – Kentridge’s drawings, mostly in black ink applied in broad brush-strokes to scattered pieces of paper. There are also portraits of Berg, which more directly evoke the German Expressionist woodcuts that served as Kentridge’s inspiration. Many of the drawings depict Lulu in various stages of dress – more often undress – but despite her scanty costumes, nudity is confined to the drawings. The projected images are often set in motion, in sync with the music and the action, to create a sort of jerky animation, a technique used to expose or cover the nudity of the figures in the drawings. Black ink and the slashing strokes with which it is applied represent repeated bloodshed. Most poignant was the final image of the murdered Lulu. 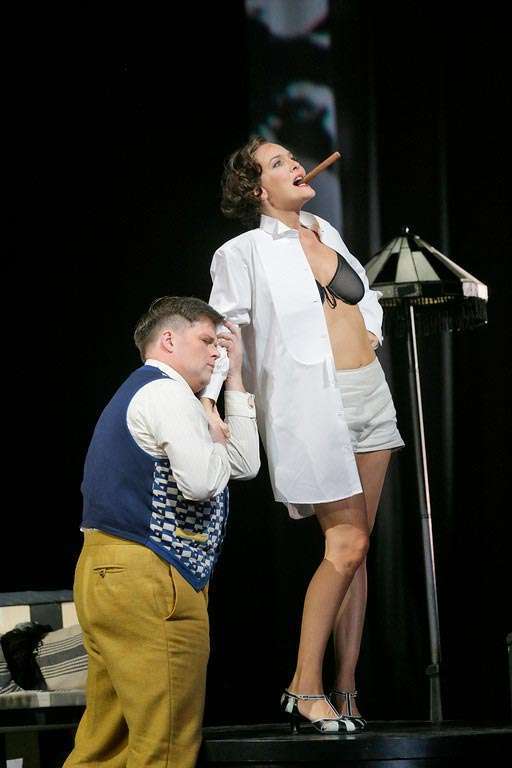 In contrast, Goiris uses pastel colors to clothe Lulu’s husbands, her lovers, and her clients. Each time Lulu acquires her latest husband or lover she adds one of his garments to her own costume. Lulu’s husbands all return in sequence in the final scene, now as her streetwalker clients: including the Physician (Lulu’s first husband), the Painter (second) who becomes the African Prince, and, most significantly, Dr. Schön comes back as Jack the Ripper, whose coat is in the same chartreuse color as Schön’s suit. Motivic recapitulations identifying each of these pairings reflect one aspect of the interweaving of dramatic and musical ideas that abound in Berg’s conception, as realized by Friedrich Cerha’s completion of the final Act.

As in Berg’s earlier masterpiece, Wozzeck, the opera is based on numerous complex musical forms. What matters is the remarkable beauty of this richly romantic score, which Koenigs and the Met Orchestra brought vividly to life. Petersen’s dynamic portrayal of Lulu confirmed her mastery of Berg’s demanding writing, and she brought a sympathetic sweetness to more melodic passages.

Three of the male principals had taken part in the debut run in Amsterdam. Johan Reuter brought considerable power to Schön and Jack the Ripper. One of the most intense images comes at the end of Act One, with Schön on all fours and Lulu sitting astride his back as she dictated, and he wrote, a letter breaking off his engagement to another woman. Franz Grundheber was excellent as Schigolch, an older man whose precise relationship to Lulu is left to speculation – he might be her father. Making an auspicious Met debut, Daniel Brenna was a fine Alwa, Schön’s son, whose amorous pursuit of Lulu precipitates a confrontation and her shooting and killing her husband. 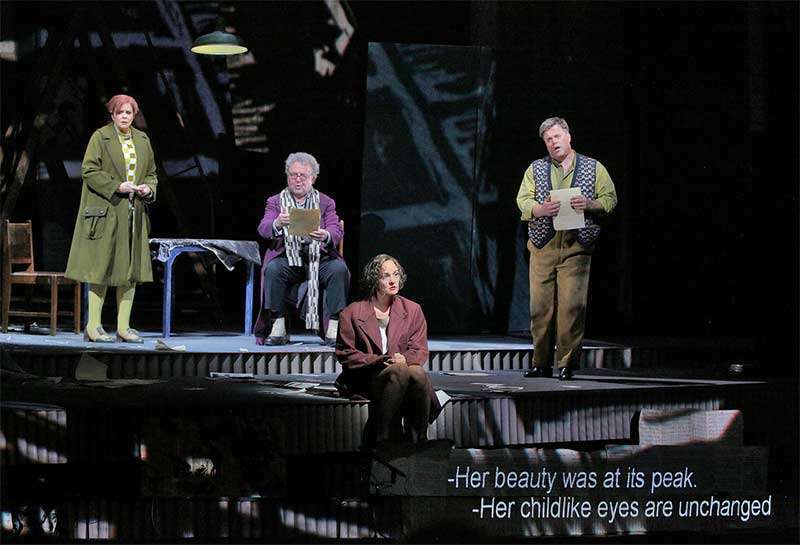 Paul Groves gave solid accounts of the ardent Painter who seduces and then marries Lulu, but who kills himself when he learns of her past debaucheries, and of the African Prince who, after his argumentative encounter with Lulu, dispatches Alwa with brute force. Susan Graham was marvelous as Geschwitz, the lesbian countess so enamored of Lulu that she intentionally contracts cholera as a device for taking her place in prison, allowing Lulu to escape. Graham’s singing in the final scene was gorgeous and touching, first as Geschwitz contemplates suicide before Lulu returns with the Ripper and then after he has murdered Lulu and stabbed the countess and left her to die.

Successful in multi-roles were Martin Winkler as the Animal Trainer who opens the opera, and he also sang strongly as the Acrobat, a member of Lulu’s entourage along with the Schoolboy, memorably characterized by Elizabeth DeShong, who also portrayed the Wardrobe Mistress and a Page. Alan Oke was the Prince who admires Lulu and wants to take her to Africa, Schön’s Manservant and, most impressively, the Marquis who tries to blackmail Lulu. Julian Close was a strong presence as the Banker at the epicenter of the rise, and catastrophic fall, of the Jungfrau Railway shares, and earlier portrayed the Theatre Manager.

This staging of Lulu offers an embarrassment of riches – so plentiful as to tax one’s ability to take in everything. Since this dilemma would have been compounded if we could access an English translation of the libretto only on seatbacks, the titles were also projected onto a screen just below the singers. Yet, so many images went by at such a rapid pace that it would take repeated viewings for them all to register fully. One can only hope that this production will be active for many years. This audience was wildly enthusiastic.