Handel
Agrippina – Opera seria in three acts to a libretto by Cardinal Vincenzo Grimani, based on events c. AD 40–50 as related by Tacitus and Suetonius [sung in Italian, with English Met Titles by Christopher Bergen] 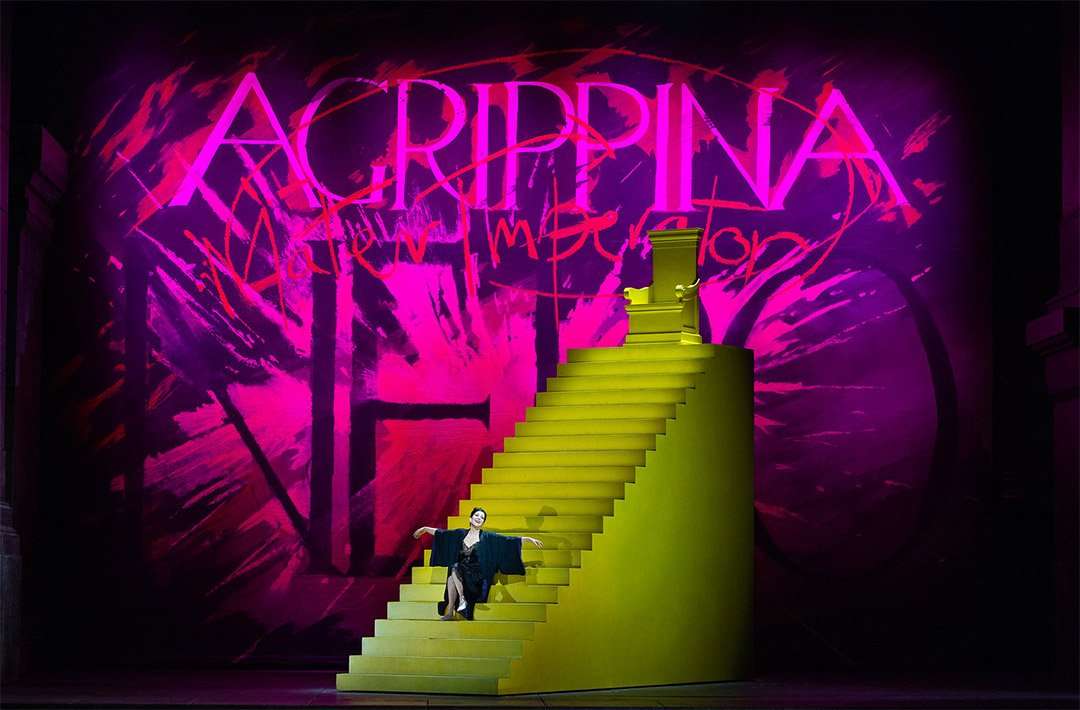 Agrippina was Handel’s first great operatic hit, its intrigue-filled plot about power struggles in ancient Rome so immediately successful with Venetian audiences that 27 performances were quickly scheduled at Teatro San Giovanni Grisostomo, where it premiered. Now, just over three centuries later, David McVicar’s production is the opera’s first by The Metropolitan Opera. Its incorporation of present-day dress and modern technological touches makes the characters quite recognizable to today’s audiences, enabling the opera’s biting satire to come through marvelously.

Harry Bicket, conducting from the harpsichord, has a masterful command of the score, adopting well-considered tempos and drawing an orchestral sound that is delicate, yet robust enough to fill the huge opera house. The score – for the most part a succession of recitatives and arias in ABA form, with the da capo repeats adding florid ornamentation – consistently sustains audience interest with infectious melodies, some original and some that would have been familiar to the Venetian audience from previous works by Handel and other composers. With this production, Bicket adds another success to his previous Handel outings at The Met – Rodelinda and Giulio Cesare, the latter also produced by McVicar. 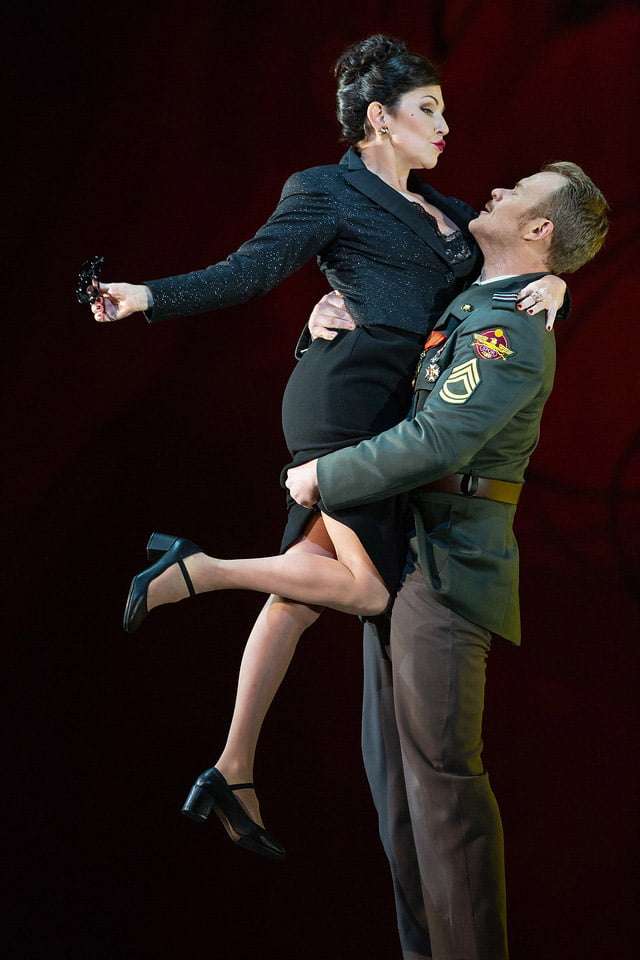 Joyce DiDonato leads a brilliant cast, each of whom creates a distinctive and memorable character. DiDonato’s Agrippina is the ultimate schemer, single-mindedly pursuing her dream of having her son, Nerone (Nero), succeed her husband Claudio (Claudius) as emperor. (In history, Nero returned the favor by having Agrippina assassinated some five years after he ascended to the throne!) DiDonato powerfully asserts her character’s combativeness in the fiery coloratura aria, ‘L’alma mia frà le tempeste’ (My soul, amidst the tempest) and intensely prepares to initiate a murder plot in ‘Pensieri, voi mi tormentate’ (How my thoughts torment me), echoed by solo oboe. She uses her aria, ‘Se vuoi pace’ (If you desire peace) to reconcile with Claudio in order to win the throne for Nerone.

Kate Lindsey’s Nerone is a gangly, witless adolescent who steals scene after scene, slithering across the stage, slouching at the bar in a cocktail lounge, and all but disappearing in a cloud of powdered cocaine during the brilliant coloratura aria ‘Come nube che fugge dal vento’ (As a cloud flies from the wind). Lindsey showed off a fine legato in ‘Qual piacer a un cor pietoso’ (What pleasure it affords a kind heart), which drips with hypocrisy as Nerone disrespects the populace he is supposed to be aiding.

Standing in the way of Nerone’s accession is the army commander, Ottone (Otho), the opera’s only completely honorable character, who as a reward for saving Claudio’s life is made the emperor’s chosen successor. Ottone has many of the most beautiful melodies, some evoking what Handel’s original audiences would have perceived as akin to church music, and countertenor Iestyn Davies’s superb portrayal captures Ottone’s virtue and valor. His pain and bewilderment when Agrippina tricks Claudio into condemning him as a traitor is touchingly expressed in ‘Voi che udite il mio lamento’ (You who hear my complaint), and his love for Poppea comes through gorgeously as he serenades her in ‘Vaghe fonti’ (Pretty streams).

Brenda Rae, making her Met debut as Poppea, is a fine actress, adept at physical comedy as she copes with the amorous attentions of Claudio, Ottone and Nerone, as well as with Agrippina’s manipulative trickery. Rae is equally at ease in varying vocal styles, from the sweetly lyrical ‘Vaghe perle’ (you precious pearls), to raging coloratura in ‘Se giunge un dìspetto’ (if something vexatious wounds the heart), and the brightly florid ‘Bella pur nel mio diletta’ (How lovely it would be).

Bass Matthew Rose excels as an over-the-top Claudio, a womanizing autocrat who (quite coincidently, I am sure) plays golf and favors long red ties. The emperor’s assertion of divine power in his buffo aria ‘Io di Roma il Giove sono’ contrasts with his actual ineffectiveness at the hands of his scheming wife and mistress. Countertenor Nicholas Tamagna and baritone Duncan Rock as Agrippina’s henchmen, and bass Christian Zaremba as Claudio’s servant, all give fine performances. 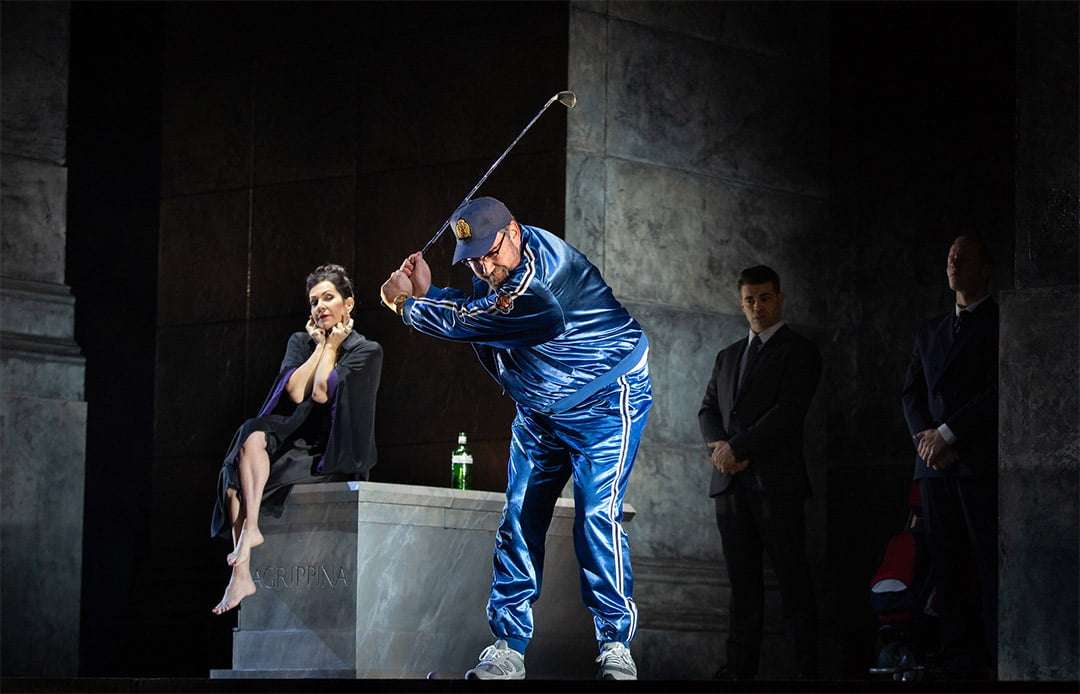 The focal point of the stage set (and of the plot as well) is the emperor’s throne, situated atop a tall, golden staircase that rotates and moves on, off and across the stage. Various characters mount the stairs, usually without reaching the top, reflecting the waxing and waning of their respective ambitions. Agrippina draws laughter when she appears to set other huge structures in motion with nothing more than a finger’s touch, thus belying their massive appearance. Effective technological touches include a reporter interviewing Ottone, which we see live on a TV screen, and mobile phones used both for dialogue and for taking selfies. There is amusing business from a bartender whose cocktail shaker Is in constant motion, often flying through the air above his head, at a bar at which a harpsichord Is played brilliantly by Bradley Brookshire, who also provides ripieno continuo from the pit, notably outstanding in accompanying arias by Rae and DiDonato.

Humorous touches in Andrew George’s over-the-top choreography include a hilarious couple dancing at the bar and a pair of soldiers who draw Iestyn Davies’s otherwise staid Ottone into joining their jaunty dance steps as he sings ‘Coronato il crin d’alloro’, declaring that he desires Poppea more than the throne.

Agrippina finally does see her son ascend to the throne, and the vindicated Ottone, foregoing his political ambitions, is reunited with Poppea. The opera ends, as it began, with all of the characters lying on gravestones inscribed with their names.