Offenbach
Les Contes d’Hoffmann – Opera in three acts with Prologue and Epilogue, to a libretto by Jules Barbier & Michael Carré after E. T. A. Hoffmann [sung in French with English Met Titles by Sonya Friedman]

The Orchestra of the Metropolitan Opera
John Keenan 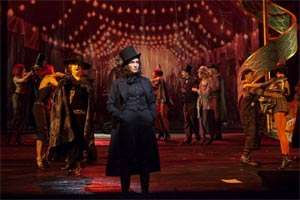 This new production by Bartlett Sher of Jacques Offenbach’s “Les Contes d’Hoffmann”, which premiered on 3 December, marks another step in the transformation of the Metropolitan Opera’s repertory to a lighter, more abstract style of stagecraft as general manager Peter Gelb continues to put his stamp on the company. Sher’s production serves the opera well, with sets, costumes and staging that tell each of its component tales effectively and consistently with Offenbach’s music as it changes stylistically from one episode to another.

In the title role of Hoffmann, the German author upon whose stories the opera is based, Joseph Calleja was the evening’s unmistakeable star. Engaged by the Met when Rolando Villazón, who was originally slated to sing Hoffmann, had to withdraw from this production for medical reasons, Calleja has proved to be ideally suited for this role, which he is singing for the first time. His voice rang out with clarity without ever sounding forced, and his phrasing, richness of tone and elocution were impeccable. His vocal and dramatic characterisation of Hoffmann ran the emotional gamut from triumph to dejection, from ardour to revulsion, and from humour to sorrow, as he wooed – and lost – each of the women he desired. 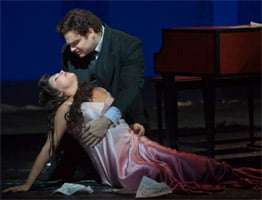 Anna Netrebko was marvellous as Antonia, spinning out the vocal line of ‘Elle a fui, la tourterelle’ with lush and lyrical romanticism. She also appeared as the diva Stella in the prologue and epilogue. The role of Antonia fits Netrebko’s voice and technique perfectly, and this performance surely ranks among the high points of her career. It thus was probably for the best that she decided against taking on all four heroines, as had been originally planned.

Alan Held, as the four adversaries who foil Hoffmann at every turn, sang with an appropriately sinister edge to his voice, and his sardonic laughter provided dramatic emphasis at various points in the opera. His exchanges of insults with Hoffmann in the ‘Prologue’ were delightfully humorous, as was his comedic business as Coppélius in Spalanzani’s Paris workshop. As Dr Miracle, driving Antonia to sing herself to death, and in Dapertutto’s ‘diamond’ aria, ‘Tourne, tourne, miroir’, Held’s voice resonated darkly, conveying a very real sense of danger. (Held’s engagement for this production also came as a departure from the Met’s originally announced plan to have the four villains portrayed by René Pape, who decided against taking on that assignment.) 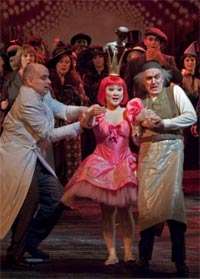 Kate Lindsey was outstanding as the Muse of Poetry and Hoffmann’s student companion, Nicklausse. As the Muse, she framed the opera’s plot, vowing in the ‘Prologue’ to protect Hoffmann from his frivolous infatuation with Stella, and in the ‘Epilogue’ celebrating the rekindling of Hoffmann’s artistic genius through the sorrow of his lost loves. As Nicklausse she was almost constantly present, warning Hoffmann against the threats of his adversaries, but never overtly interfering with their nefarious plots against him. Lindsey contributed fine singing in various ensembles, most notably in the barcarolle duet with Giulietta in the third act. (Lindsey, a graduate of the Met’s Lindemann Young Artist Development Program, is appearing in her tenth role at the Met since her debut there four years ago.)

This was one of three performances being conducted by John Keenan during the current run. (The Met’s music director, James Levine, is leading the others.) Keenan began the ‘Prologue’ in something of a rush, his too-brisk tempo in the Muse’s opening aria throwing Lindsey momentarily off stride – although she recovered quickly. Keenan and the Met Orchestra settled into a more comfortable pace soon enough, generating a traversal of the score that was pleasant and appropriately supportive of the singers, but which only intermittently showed off the orchestra at its very best. 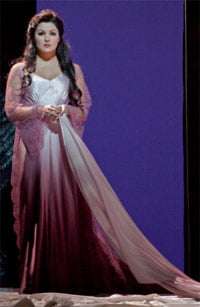 The cast for this performance included substitutes for three ailing principals, including two of Hoffmann’s lovers. Making her Met debut, Rachelle Gilmore (substituting for Kathleen Kim) brought the house down as Olympia. Her flawless coloratura in ‘Les oiseaux dans la charmille’ was quite literally show-stopping, as she gave a delightfully comedic portrayal of the automaton with which Hoffmann – believing her human, thanks to Coppélius’s magic eyeglasses – falls hopelessly in love, to his ultimate humiliation.

In the supporting cast, Dean Peterson was a boisterous Luther in the ‘Prologue’ and ‘Epilogue’ and a sorrowful and bitter Crespel, twice bereaved by the deaths of Antonia and her mother – whose ghost was well portrayed by Wendy White. Michael Todd Simpson, making his Met debut in this production, gave fine performances as both the student Herrmann and Giulietta’s lover Schlémil; veteran Met tenor Mark Schowalter was an amusingly crafty Spalanzani; and Rodell Rosel acquitted himself well as the student Nathanaël. 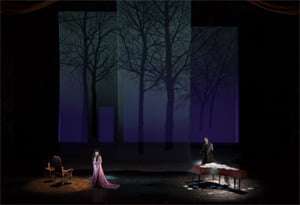 Musically, Bartlett Sher’s production does not represent a departure from the Met’s most recent revival of Otto Schenk’s 1982 production. Both use the critical edition edited by Fritz Oeser, in which Antonia’s Act precedes Giulietta’s. (Prior to 2000, the Schenk production had used the Choudens Edition, in which those two acts were performed in the reverse order.)

Sher’s production is as eclectic as the opera itself: somewhat realistic in the ‘Prologue’ and ‘Epilogue’, over-the-top in zaniness in the Olympia tale, abstract and simple in the Antonia Act, and quite gaudy in depicting Giulietta’s rather degenerate Venice. Throughout the opera, simple physical elements such as walls and panels were moved horizontally or vertically to open and close archways, to foreshorten or deepen the stage, and to introduce scenic features. The recurring presence of Hoffmann’s typewriter-equipped writing desk served as a unifying element, reinforcing the notion that the tales were not so much recollections of past events as fictional expressions of various aspects of the personality of Hoffmann’s beloved Stella.

In the ‘Prologue’, Michael Yeargan’s sets and James F. Ingalls’s lighting made effective use of rear-screen projections to turn a simple row of tables into Luther’s Nuremberg tavern, and then to depict the opera house where the diva Stella takes a curtain call. Yeargan used brightly coloured curtains as partitions in Spalanzani’s workshop, leaving to one’s imagination what Hoffmann sees as he peeks behind them. The simplicity of that device contrasted sharply with the excessive complexity of what was suspended from above, including a spiralling dragon that rotated continuously, creating a sometimes unwelcome distraction from the words, music and action.

Catherine Zuber’s costumes were fairly realistic in the ‘Prologue’, suggesting an early-twentieth-century setting for the opera, but then quite zany in the Olympia act. Dou Dou Huang’s choreography in the ‘Prologue’ was highly amusing, as one of the tavern’s waiters was draped in an apron to portray the dwarf Kleinzach of whom Hoffmann sang (‘Il était une fois à la cour d’Eisenach’). By the song’s end, there was a phalanx of Kleinzachs dancing together. Dance is an important plot element in the tale of Olympia, and Huang’s choreography pervaded that act, with five ballerinas en pointe all costumed as Olympia partnered by five male dancers costumed as Hoffmann. The end of the act was a sort of mad ball, with Spalanzani’s guests in zany costumes joining the multiple pairs of Olympias and Hoffmanns.

Offenbach’s setting of Antonia’s tale is musically more intimate and subdued than Olympia’s, and this is reflected in Sher’s production. Antonia’s house in Munich is suggested by only a chair and a piano, with large panels, decorated with bare-branched trees, sometimes descending to the stage to define the dimensions of the house and grounds. Dr Miracle’s violin likewise is seen as an object suspended from above. In this simple and rather abstract setting, it seemed strange that Antonia’s mother was portrayed as if she were a living person rather than a ghost, going so far as to come into physical contact with her daughter.

The sets and costumes for Giulietta’s Venetian palazzo were of a somewhat earlier period – eighteenth-century, perhaps – and rather gaudy, and the portrayal of sexual debauchery quite literal, including several virtually bare-breasted women showering Hoffmann with their affections. This was more in-keeping with the opera’s plot-line than Sher’s use of such partial nudity in the Olympia act, which, although more subtly managed, seemed gratuitous. In neither case, however, was the effect unduly cheap or tawdry.

Sher has attributed his decision to set the opera in the early-twentieth-century to similarities between Offenbach and Franz Kafka, both of whom were born Jewish, but whose efforts at assimilation into European society never won them the acceptance they desired. He also points to having drawn inspiration from film director Federico Fellini, whose artistic creativity, like Hoffmann’s, was greatly influenced by his relationships with women. None of these influences seem to have hijacked the production, however, as it remains quite faithful to what Offenbach created.