Skip to content
LnRiLWNvbnRhaW5lcltkYXRhLXRvb2xzZXQtYmxvY2tzLWNvbnRhaW5lcj0iNmIzNDMzNmNmZTc3NWZiNGJlMTVjMmIwMzU3NWM1MjYiXSB7IHBhZGRpbmc6IDI1cHg7Ym94LXNoYWRvdzogNXB4IDVweCAxMHB4IDAgcmdiYSggMCwgMCwgMCwgMC41ICk7Ym9yZGVyOiAycHggZG90dGVkIHJnYmEoIDEwOSwgMTA4LCAxMDgsIDEgKTsgfSAudGItZmllbGRbZGF0YS10b29sc2V0LWJsb2Nrcy1maWVsZD0iODM3Y2ExZjc0MGRjZDdkOTdlMzQzOWMyYjIwMWZmZTMiXSB7IGJhY2tncm91bmQtY29sb3I6IHJnYmEoIDIzOCwgMjM4LCAyMzgsIDEgKTtwYWRkaW5nLXRvcDogMTBweDtwYWRkaW5nLWJvdHRvbTogMTBweDtwYWRkaW5nLWxlZnQ6IDEwcHg7IH0g
LnRiLWNvbnRhaW5lcltkYXRhLXRvb2xzZXQtYmxvY2tzLWNvbnRhaW5lcj0iNmIzNDMzNmNmZTc3NWZiNGJlMTVjMmIwMzU3NWM1MjYiXSB7IHBhZGRpbmc6IDI1cHg7Ym94LXNoYWRvdzogNXB4IDVweCAxMHB4IDAgcmdiYSggMCwgMCwgMCwgMC41ICk7Ym9yZGVyOiAycHggZG90dGVkIHJnYmEoIDEwOSwgMTA4LCAxMDgsIDEgKTsgfSAudGItZmllbGRbZGF0YS10b29sc2V0LWJsb2Nrcy1maWVsZD0iODM3Y2ExZjc0MGRjZDdkOTdlMzQzOWMyYjIwMWZmZTMiXSB7IGJhY2tncm91bmQtY29sb3I6IHJnYmEoIDIzOCwgMjM4LCAyMzgsIDEgKTtwYWRkaW5nLXRvcDogMTBweDtwYWRkaW5nLWJvdHRvbTogMTBweDtwYWRkaW5nLWxlZnQ6IDEwcHg7IH0g
Janáček
Jenůfa – Opera in three Acts to a libretto by the composer based on the play Její pastorkyňa by Gabriela Preissová [sung in Czech, with English Met Titles by Christopher Bergen]
LnRiLWNvbnRhaW5lcltkYXRhLXRvb2xzZXQtYmxvY2tzLWNvbnRhaW5lcj0iNmIzNDMzNmNmZTc3NWZiNGJlMTVjMmIwMzU3NWM1MjYiXSB7IHBhZGRpbmc6IDI1cHg7Ym94LXNoYWRvdzogNXB4IDVweCAxMHB4IDAgcmdiYSggMCwgMCwgMCwgMC41ICk7Ym9yZGVyOiAycHggZG90dGVkIHJnYmEoIDEwOSwgMTA4LCAxMDgsIDEgKTsgfSAudGItZmllbGRbZGF0YS10b29sc2V0LWJsb2Nrcy1maWVsZD0iODM3Y2ExZjc0MGRjZDdkOTdlMzQzOWMyYjIwMWZmZTMiXSB7IGJhY2tncm91bmQtY29sb3I6IHJnYmEoIDIzOCwgMjM4LCAyMzgsIDEgKTtwYWRkaW5nLXRvcDogMTBweDtwYWRkaW5nLWJvdHRvbTogMTBweDtwYWRkaW5nLWxlZnQ6IDEwcHg7IH0g 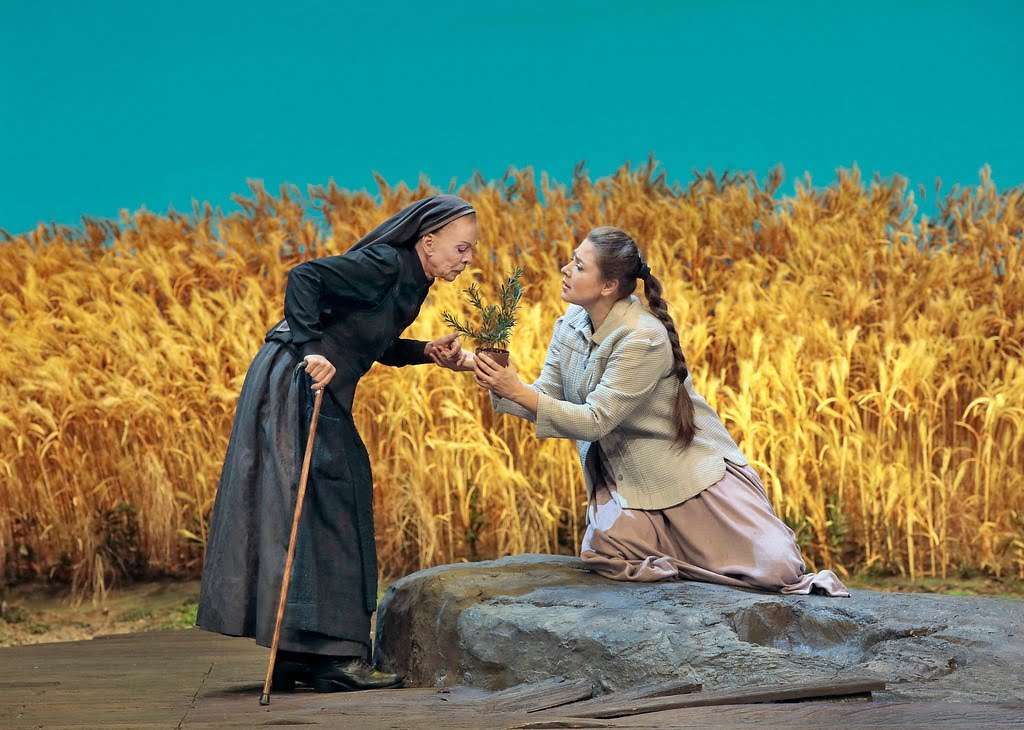 Olivier Tambosi’s production of Jenůfa premiered at the Met in 2003. David Robertson leads a superb account of this second revival of Leoš Janáček’s first operatic masterpiece, with impressive appearances by Oksana Dyka – radiant in the title-role, from anxiety to tragedy and finally to elation – and Karita Mattila as her stepmother, the Kostelnička. Matilla has previously portrayed Jenůfa here. The rest of the cast is equally excellent.

Tambosi’s production features attractive sets and appropriate costumes, and effective lighting, if sometimes too abstract for a ‘realistic’ opera. The outer Acts take place at a mill, with high walls on either side of the stage and a field at the rear, first with gold-lit stalks of grain then replaced with the orange-brown earth of early Spring. There is no sign of a mill-wheel, only the aural suggestion of its turning coming from a marimba that substitutes for the composer’s xylophone, which during the introduction and later, and using specific mallets, “can achieve the lower pitch originally indicated by Janáček…” [Met program note].

In the first Act, an outcropping of rock is placed centrally, to be replaced by several shards scattered in the third, an incongruous touch since this appears to be the same spot. Even more inexplicable is the enormous boulder that dominates Act Two – apparently inside the Kostelnička’s cottage, which also features walls that meet at stage-rear but separate to reveal a black sky with falling snow after the Kostelnička has departed with Jenůfa’s baby. 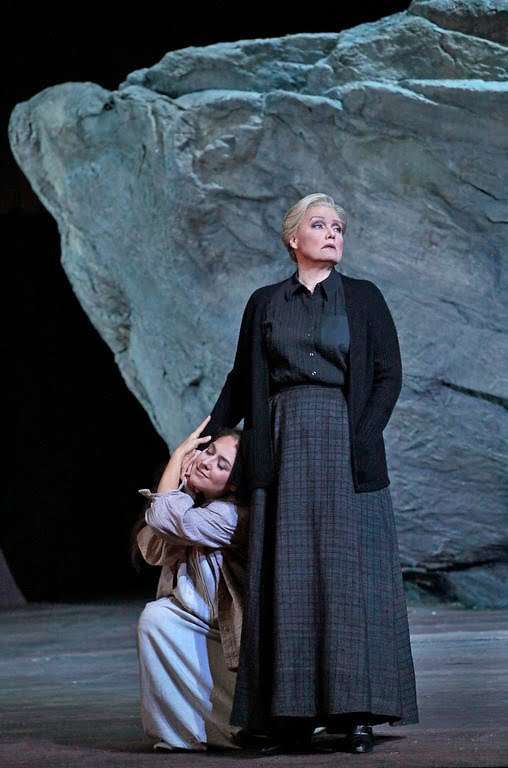 The plot hinges on the complicated genealogy of three generations of the Buryja family. Grandmother Buryjovka has survived her two sons. The elder one, a miller, had married a widow and adopted her son, Laca Klemeň. The couple then also had a child, Števa, who inherited the mill. The half-brothers are in love with Jenůfa, the daughter of the grandmother’s younger son, Toma. When Jenůfa’s mother died, he married the church sacristan, the Kostelnička, the title for the ultimate moral authority of the village. Upon his death she became the only surviving member of the Buryja’s middle generation.

As the opera begins, Jenůfa is secretly three months pregnant with Števa’s child. Sibling rivalry predominates. Joseph Kaiser and Daniel Brenna brought their characters vividly to life, Kaiser the womanizing Števa, whose drunkenness has caused the Kostelnička (victim of an abusive husband) to forbid Jenůfa to marry him until he’s sober for one year, and Brenna was trenchant as the embittered and jealous Laca, who slashes Jenůfa’s cheek at the Act’s close.

Act Two, set six months later, shortly after Jenůfa has given birth, was dominated by Mattila. The Kostelnička, to avoid public shame, has kept her stepdaughter hidden throughout pregnancy and childbirth, telling the community she has left for Vienna. What now to do with the child? She gives Jenůfa a sleeping draught and summons Števa. Already engaged to the Mayor’s daughter, he refuses to marry Jenůfa or even look at his son. The Kostelnička, fearing that Laca, still keen on Jenůfa, will not wed her as the child is Števa’s, tells him the baby has died.

The dramatic crux comes when the Kostelnička determines that her lie to Laca should come true by killing the baby. Mattila, with typical intensity, conveyed her struggle between righteousness and the fear of shame, culminating in carrying the infant into the winter night to drown him under the river’s ice. 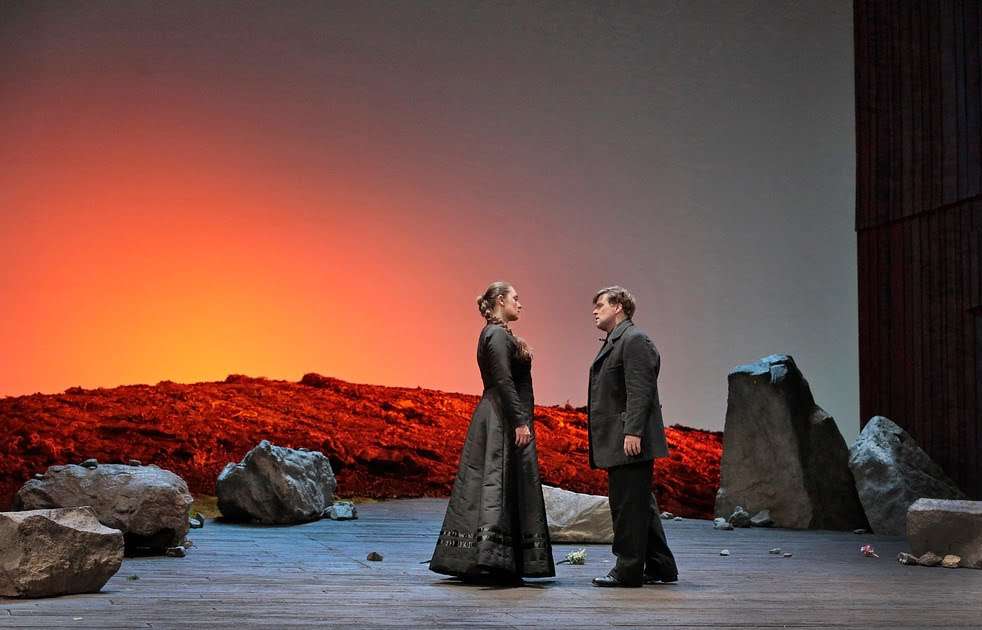 Jenůfa awakens. Dyka sang (with tender beauty, accompanied by a harp) a prayer for the baby’s safety, which turns to resignation when told that her son is dead, and then to anger regarding Števa’s abandonment of her. The Kostelnička now persuades Jenůfa to marry Laca, conferring her blessing on the couple and cursing Števa and his bride-to-be. In the most arresting moment of Tambosi’s staging, the Kostelnička pulls Jenůfa’s and Laca’s hands together as the orchestra plays an ominous postlude.

In the final Act, as guests arrive for the wedding, Jenůfa gets the half-brothers reconciled. Grandmother Buryjovka blesses the betrothed and then festivities are interrupted by the discovery of the dead newborn. The villagers turn against Jenůfa and the Kostelnička confesses. In a powerfully moving scene, Jenůfa forgives her. The Kostelnička is led away, followed by those assembled, and a perfectly-managed extended crescendo from the pit leaves Jenůfa and Laca together. Brenna and Dyka conveyed the couple’s ecstasy as Laca assures Jenůfa of his commitment to her, and the orchestra built to a glorious conclusion.

Janáček set the prose of the original play to music matching the rhythmic and pitch patterns of spoken Czech (essential then that this is the sung language). Robertson is appreciative not only of this characteristic style, but also of how Janáček captures the Moravian folk idiom in wholly innovative terms.