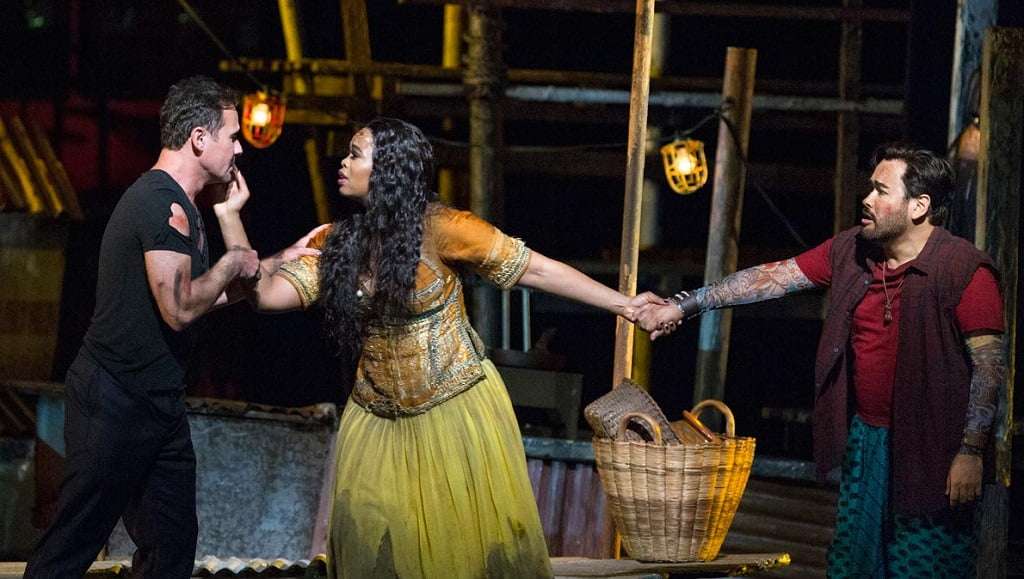 This production of Bizet’s Pearl Fishers provides the most spectacularly beautiful visual effect that I have experienced in any opera. This co-production with English National Opera was premiered there in 2010, and Penny Woodcock’s present-day setting in an Asian village works well, marvelously realizing how the sea provides the occupants’ living, yet also poses an existential threat. As the prelude begins, the stage appears to be filled with water, through which the eponymous pearl fishers dive down from the top of the proscenium and swim back up, with strategically projected bubbles adding to the effect. Later, a combination of projections and billowing fabric depict storm-induced turbulence, rising tsunami-like at the end of Act Two and continuing to depict the waves to cover the scene-change to the final Act.

The story is about two lifelong friends, Nadir and Zurga, who became rivals when both fell in love with Leïla, a Hindu priestess, but who now renew their friendship in the celebrated duet, ‘Au fond du temple saint’, gloriously sung by Javier Camarena and Mariusz Kwiecien. By placing it near the beginning, Bizet is able to reprise its melody, directly and altered, throughout. The friends’ truce soon ends when the priestess brought to the village to pray for calm seas turns out to be Leïla, who breaks a vow of chastity and rekindles her relationship with Nadir, and a tempest breaks out. The couple’s transgression is discovered, and the remainder of the plot concerns whether and how the offenders are to be punished, with an unexpected twist.

Nadir’s Act One romance, ‘Je crois entendre encore’, shows off the thrilling yet burnished quality of Camarena’s singing, and he and Pretty Yende are captivating in their love-duet, ‘Ton cœur n’a pas compris le mien’. As the high priest Nourabad, Nicolas Testé sings with a pleasing and resonant voice. Unfortunately, early on, Kwiecien was momentarily troubled, and although he sang through the problem well-enough, he was unable to return following intermission. He was ably replaced by his cover, Alexander Birch Elliott, who once comfortable with the staging was solid vocally, delivering Zurga’s big aria in fine voice, winning a long ovation. His self-assurance grew as his character’s music and actions became more impassioned in response to Leïla’s pleas on Nadir’s behalf.

Emmanuel Villaume brings out the beauty of Bizet’s score, with notable contributions from flute, harp, oboe and horns, and the Met Chorus is in typically excellent form. The Pearl Fishers had been absent from the Met for a century, but this production makes a strong case for now keeping it active.