Shostakovich
The Nose, Op.15 – Opera in three acts and ten scenes to a libretto by the composer, with Evgeny Zamyatin, Georgy Ionin, and Alexander Preis, based on the short story by Gogol [sung in Russian with English subtitles projected onto the set, and MET titles in English, German and Spanish] 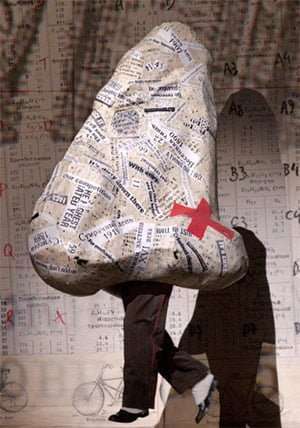 As Valery Gergiev seems to cherish taking on the workload of several conductors, the Metropolitan Opera is keeping him busy with alternating productions of Eugene Onegin and The Nose. This first performance of the Shostakovich certainly found him energized, conducting a highly idiomatic and spirited performance, using nothing but a sort of oversize toothpick.

It is difficult to fathom that an opera as innovative and technically accomplished as The Nose should be the work of a 22-year-old. Finished three years after his equally astounding First Symphony – which was immediately championed by Bruno Walter and Leopold Stokowski – the work shows influences of Schoenberg, Berg, Stravinsky, and Prokofiev, yet at the same time it combines traditional and avant-garde elements in a style already uniquely Shostakovich’s own. The surrealistic subject matter, based on a short story by Gogol, lends itself perfectly to such ingenious treatment.

Set in Saint Petersburg, the opera starts with the barber Ivan Yakovlevich shaving one of his regular customers, Collegiate Assessor Kovalyov. The next morning Yakovlevich finds a nose in a loaf of bread his wife has just baked, and he ends up throwing it into the river Neva. Kovalyov meanwhile has woken up with a smooth, flat patch of skin in the place where his nose used to be. Searching for it all over the city, he finds it praying in the cathedral, grown by now to the size of a human being and dressed in the uniform of a State Councilor, who outranks him. It refuses to have anything to do with an inferior and escapes again. 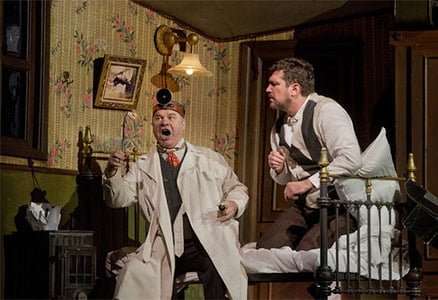 In Act Two (the opera is performed without intermissions) Kovalyov tries to place an advertisement in the paper, but it is refused on the grounds that it would ruin the reputation of the publication. He is advised to write a story about the matter instead and returns to his home, disconsolate. The police finally take up the search in Act Three and manage to corner the nose among the hustle and bustle of the city’s railway station. They beat it mercilessly, thus shrinking it back to its original size, and wrapped in a piece of tissue it is returned – extorting a “gratuity” – to Kovalyov. He tries to re-attach it to his face but it won’t stick, even with the assistance of a doctor. Suspecting that a curse has been put on it by Madame Podtochina, whose daughter he has refused to marry, he writes a letter to her, but her answer proves his theory wrong. However, just as mysteriously as it has disappeared, the nose finally reappears on his face, and Yakovlevich turns up to give him a shave.

A revival of his 2010 production (a co-production with the Festival d’Aix en Provence and Opéra National de Lyon), South African director William Kentridge has managed to match the absurdity of this story and Shostakovich’s highly imaginative score. The tall, cavernous set, interspersed with smaller spaces as needed, is used mainly as a projection screen, often covered in newsprint, but also featuring stills, animation and film footage. In one memorable scene Shostakovich himself appears at the piano, his movements electronically manipulated to match the rhythm of the nine-member percussion section to make it appear as he himself was producing their splendid cacophony. Toward the end Anna Pavlova becomes the body of the Nose, dancing gracefully as Kovalyov yearns for its return. But in addition to all the technical effects and all the artistic imagination, what impresses most is Kentridge’s ability to synchronize with, and even increase, the work’s every action and mood, just as Shostakovich uses his astonishing powers of orchestration to underline moments of comedy, irony, false piety, melancholy, and utter madness. Frantic music begets frantic action, while tender, wistful moments, often characterized by solo woodwind instruments, engender stillness. When, in his small bedroom, Kovalyov bemoans his state in a heart-wrenching aria at the end of Act Two, all the attention is focused on him. 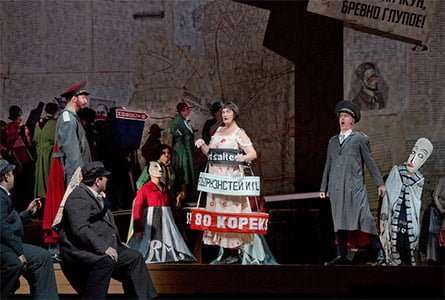 Both here and throughout the opera Brazilian baritone Paulo Szot brought out Kovalyov’s humanity – his desperation, humiliation, frustration – both as an actor and as a singer. Although the opera lasts less than two hours, as the main character he is active practically the whole time; Szot never faltered, singing with commitment, passion and great vocal expressiveness and beauty. On the other end of the spectrum, the title character only has one short aria at the beginning of Act Two, sung impressively by Alexander Lewis, and otherwise appears mainly as a mute papier-mâché figure or as a projection. The role of the police inspector falls somewhere in between in length, but it is a difficult one. Shostakovich has made this authority figure a comically high tenor, but Andrey Popov had no problems producing a ringing sound even on his E flats.

The Nose features about 30 singers in 70 different roles, and all of them were up to the task. Suffice it to single out the fine contributions of Vladimir Ognovenko as the barber, Sergei Skorokhodov as Kovalyov’s servant, James Courtney as the newspaper clerk, Gennady Bezzubenko as the doctor, Adam Klein as Yaryzhkin, the confidante, and the touching soprano of Ying Fang as Mrs Podtochina’s daughter. The Chorus and Orchestra of the Metropolitan Opera likewise excelled in this challenging work, and one can only hope that an excellent production like this will provide an incentive to other major houses to add Shostakovich’s youthful masterpiece to their repertoire.