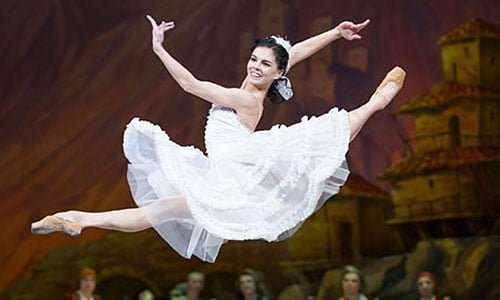 Laurencia is a fascinating window onto artistic life in Stalin’s Russia. No matter how many history books one reads, it is only by looking at the paintings, listening to the music and looking at its dance that one comprehends how art reflects the society in which it exists. Ballet was one of that country’s principal artistic flag-wavers (most Soviet ballets are now lost) so it is with double thanks that one greets Mikhail Messerer’s recreation of Vakhtang Chabukiani’s 1939 Laurencia, which he remembers from post-war Bolshoi revivals, often featuring his aunt (the legendary ballerina Maya Plisetskaya). Lope de Vega’s Spanish Golden Age play Fuente Ovejuna, with a little narrative tweaking, proved to be ideal material for a Soviet ballet, telling the tale of the uprising of an entire village to avenge the wrong-doing of a local nobleman.

Chabukiani’s ballet, his second for the Kirov company in Leningrad, proved to be an instant success, and it easy to see why, even with the juxtaposition of the light-hearted with the dramatic and distressing. And that oddness is the key; we are not Russians in Stalin’s pre-war Soviet Union and we rarely witness obvious propaganda in art. The Mikhailovsky company, as in the previous ballets they have performed in this London season, throw themselves wholeheartedly into the material, believing in it totally and, under Messerer’s guiding hand and ever-watchful eye, offer a performance true to the work’s past in a manner to make it enjoyable for today’s audience.

Much of Laurencia is picture-book Spain (strange that Russia should balletically have been so obsessed with all things Iberian), all castanets, arched backs and zapateado, and the corps de ballet have a high old time flouncing and preening in requisite style. In the famous pas de six – sometimes performed as a stand-alone – Nikolay Korpayev and Andrey Yakhnyuk delivered a near-perfect duet. Sabina Yapparova impressed as a sunny Pascuala, whose several solos showed a fine musicality and classical technique, and rising company star Oksana Bondareva made much of her solo after her rape by the local nobleman, ballet movement put at the service of intense dramatic expression in a way that Kenneth MacMillan was to develop from the 1950s onwards.

Natalia Osipova and Ivan Vasiliev seized the lead roles of Laurencia and her lover Frondoso with both hands and shook them hard. They charge at their choreography, nostrils flared, adrenaline pumping; it is high-octane stuff, dancing of such animal force that it is uncomfortable with the brash openness of it all – that is exactly what is required. Vasiliev, with appliqué moustache to evoke Chabukiani himself who created the role, tore through his choreography, exulting in its show-off quality, head thrown back laughingly like Errol Flynn or Douglas Fairbanks Snr, and executing unbelievable moves, not least a series of triple tours in the last scene. Likewise, Osipova launches into her movement with a wide-eyed, ferocious quality, but still finding time after her ‘rape’ to whip the villagers up, Marianne-like, into revolutionary ferment. Their triumph was assured.

The orchestra remains one of the company’s glories. Alexander Krein’s filmic score requires much puff from the brass and muscle-power from the percussion, and it entered into it all with clear gusto, not least in the powerful march theme which accompanies the uprising of the people against tyrannical power. Valery Ovsyanikov guided it all with the surest of hands.