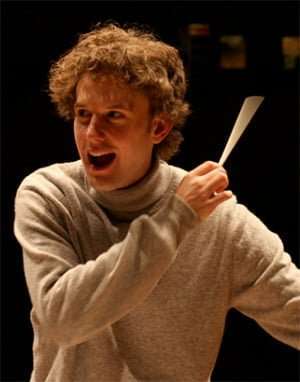 Benjamin Britten spent much of his early twenties working for the GPO Film Unit, and this audio-visual concert – films with live musical accompaniment – provided fresh perspective on his output. With the exception of Night Mail, the film scores lay largely dormant until revived by Colin Matthews and NMC in 2007. Since then they – and the films for which they were written – have come out of the cold, and the Aurora Orchestra first performed this programme at the 2012 Aldeburgh Festival.

The GPO job was not one that Britten initially enjoyed but through it he learned compositional discipline, working to aggressive deadlines with limited resources at his disposal. It also fired his imagination, and some percussive effects – the use of drills and a cart drawn over an asbestos surface just two of the techniques – sound more like the music of Varèse than that of a young English composer. Thankfully no asbestos was used on this occasion! Beginning the concert, in audio only, was Men Behind the Meters, three short but perky numbers for a 1935 film promoting the British Commercial Gas Association, scored for flute, clarinet, percussion and piano.

Samuel West then gave the first of several helpful pieces of context before the innovative Coal Face. A penetratingly focused description of mining life with a moody black and white picture, it contained the best and most distinctive music here, along with Night Mail. The drills came out – percussionists wearing goggles! – and the rat-a-tat of the drum depicted the electric coal cutter. There was even the pouring of water to suggest the transfer of coal onto a ship. Coal Face marked the first collaboration between Britten and W. H. Auden, whose verse “O lurcher-loving collier” was confidently sung by the eight-strong Aurora Voices.

By far the least comfortable of the films was God’s Chillun, which began as ‘Negroes’, an ambitious project to look at the Caribbean’s development from the abolition of the slave trade in the 19th-century to its rich production line of sugar, cocoa and bananas. It gave a salutary reminder of the terrible consequences of the slave trade. Britten’s music, though mostly cheery, had a hollow ring one suspects was there purposely. There were even fragments of the ‘Nunc Dimittis’ chant, accompanying sorrowful depictions of slavery. West, reading with great clarity and conviction, appeared ill-at-ease with the implications of the text. 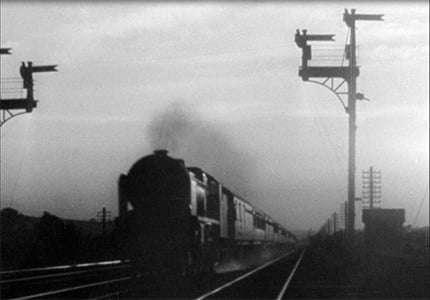 The content of Night Mail was on much safer ground. This celebration of the Royal Mail’s overnight train from London to Glasgow was shown in its full 26 minutes. The engine noises and speech unwittingly became part of the soundtrack, dovetailing neatly with Britten’s incredibly accurate description of the motion of the train through percussive means. The final sequence, where Auden’s evocative verse is heard, was expertly handled by West, despite the limited opportunities for breath. Orchestral parts were colourfully rendered, with excellent percussion and bright woodwinds.

Peace of Britain, from 1936, began the second half – introduced by West as a “piece by Britten”. This short burst of anti-war propaganda was an ideal vehicle for Britten the pacifist, and indeed it was briefly censored. The score features exaggerated percussion cautioning against the violence of war, and bass drum strokes were perfectly aligned with the impact of the bombs on the screen.

The Tocher, an animation picture with a suite based on tunes by Rossini, was much lighter in mood. Here are the building blocks for Britten’s Rossini-themed Soirées musicales and Matinées musicales. There is much humour here, in the film and in the music. Nicholas Collon coaxed out the smile on the face of Rossini’s melodies, helped by the word-less contributions of the Finchley Children’s Group. When the Tocher himself was handed a Post Office savings book, the audience broke into laughter.

“Send a wire!” was the call from the children’s choir that dominated Sixpenny Telegram, one of many catchy melodies heard throughout this afternoon. “Nine words for sixpence” was the main catchphrase flashed up, a reminder in an age of correspondence dominated by social networks, e-mail and text, that printed communication carries that little extra romance! The charm of the children’s voices was doubtless a useful advertising aid.

GPO films often had to deal with some incredibly dry material. So it was with The King’s Stamp, Britten’s first commission from the unit as part of George V’s Silver Jubilee celebrations in 1935. The film showed each part of the design and printing process, crowned by a view of the King’s comprehensive collection of world stamps. Britten’s response was music of great character, with a chirpy theme in C major that the Aurora Orchestra immediately warmed to. The side drum powered a Shostakovich-like march in another ‘Train Sequence’, while the soft hues of Parliament, briefly glimpsed in a slow aside for flute, were genuinely moving.

Finally The Way to the Sea, Britten’s last GPO collaboration with Auden, promoted the 1936 electrification of the railway line from London to Portsmouth, but not before a quick history lesson in which figures of Henry VIII and Lord Nelson had been used. This enabled Britten to include some Tudor pastiche writing of the kind he latterly perfected in Gloriana, deftly handled by harpist Sally Pryce. Collon conducted with great enthusiasm, as he did throughout, ensuring the music matched the events to be seen.

Britten’s film scores contain intriguing references to the music of Weill, Shostakovich and even Schoenberg, all composers he admired at the time. Rhythmic discipline and exuberant playing were the two principal qualities of the Aurora Orchestra’s very fine contributions, while an extra and very valuable asset to the concert lay in the films themselves, which gave the clearest possible indication of the political climate in which Britten and Auden were working.