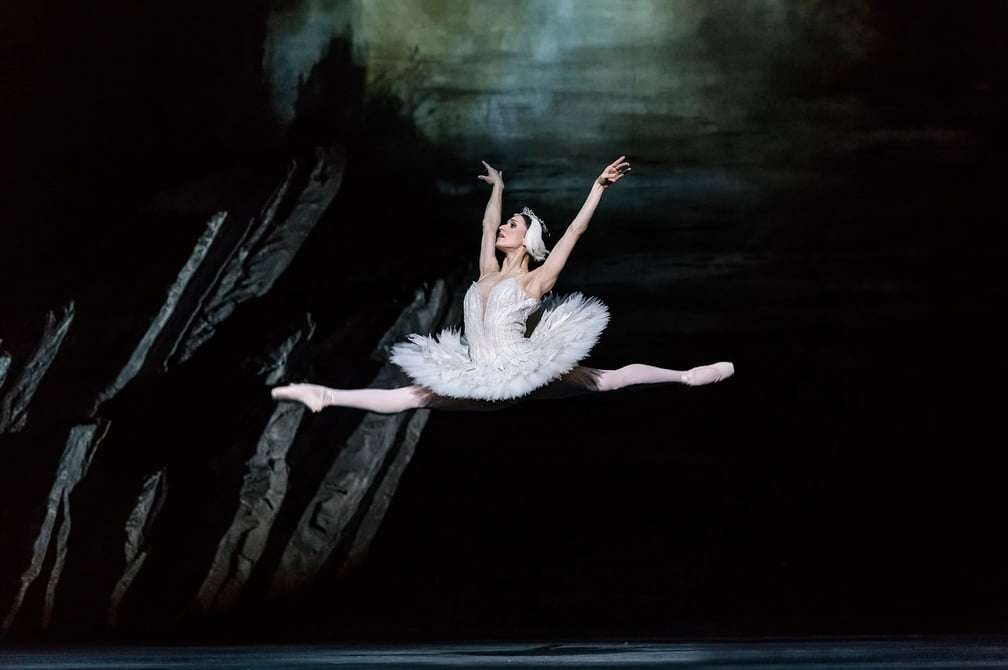 The months, if not years, of meticulous planning, the design and creation of new outfits, the choreography and the rehearsals are finally over: not The Royal Wedding but The Royal Ballet’s new production of Swan Lake, the first in a generation, which has finally opened. And it is a success, albeit with some small reservations. Many doubted the suitability of Liam Scarlett, the youngest of the company’s choreographic triumvirate, for the task, given his less-than successful track record with narrative work. But working within a clearly established framework, i.e. a revamp of a company classic and the preservation of the essentials of the dance text, seems to have liberated him somewhat, allowing his undeniable musicality to come to the fore in those sections he has altered and, in some cases, re-imagined. Scarlett is no iconoclast and is clearly working with deep respect of the traditions of both this ballet and its history in this company – the sense of relief at Covent Garden was palpable.

This is an extremely handsome production from John Macfarlane, sumptuous even, with no expense spared in the ‘human’ Acts of One and Three to indicate a rich and powerful court. The first seems to take place on the garden terraces of Tsarskoe Selo, the third in the ballroom of Londonderry House – both are ravishing to behold, although the Act One palace is set so far stage-left that about a third of the audience seated on the right of the auditorium has no idea it is there. The second and fourth lakeside scenes are not on that level, with doubts raised that the eponymous lake was there at all. For these the stage is essentially clear for the dancing of the swan corps, but there is a curiously empty feel, with less-than beautiful tree branches framing the action. In these acts too, David Finn’s otherwise adequate lighting (even if it could all be taken up a notch or two to let the audience see it all clearly) seems to falter, with Act Two’s in particular having a flat quality tinged with bilious yellow which was far from evoking poetic lyricism. 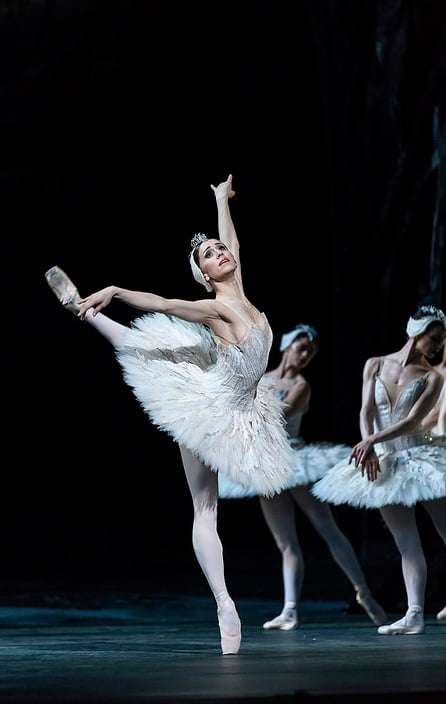 Costumes are splendid, the period indicates Gilded Age 1900s – think Consuelo Vanderbilt – which means that Act One sees assembled officers in uniform and ladies in bustles; it is unfortunate that this cannot but evoke the early pre-Revolution Acts of MacMillan’s Anastasia and means that one almost expects a Grand Duchess to make an entrance. Prince Siegfried’s Acts Two—Four costume is a wonder in black with gold detailing, but I am told that from above, and on the black stage surface, he all but disappears, spotlighting presumably considered too obvious. This particular historical period has now become a fallback for ballet designers, anxious to avoid the cod-medieval of tradition, and its styles flatter dancers’ bodies, but it is a little disappointing to see it in this new production, all the more so given that its predecessor did pretty much the same thing.

Act Three costumes are an undiluted triumph, a riot of colour and cloth, a conscious excess which intends to make the audience gasp. The lakeside Acts are fine, exquisitely made tutus for Odette and her cohort, traditional, exquisitely made and, therefore, wholly satisfying.

Scarlett has had to tread a very fine line between tradition and his own artistic creativity – this is his production and not a revival. He has left the Ivanov of Act Two and elements of Petipa in Acts One and Three well alone, even if the subtle changes he has made to the pas de trois do nothing to enhance it, while one particular change of arm position actively diminishes it. His refreshing of the Act Three character dances is successful, not least the Spanish Dance which takes on new life with a new one-woman-with-four-men configuration while blending steps from the company’s established version with his own. For the record, he has retained Frederick Ashton’s peerless Neapolitan Dance, no doubt having fond memories of dancing it himself. Ivanov comes off well in Act Two, the choreography for both corps and principals retained almost intact. 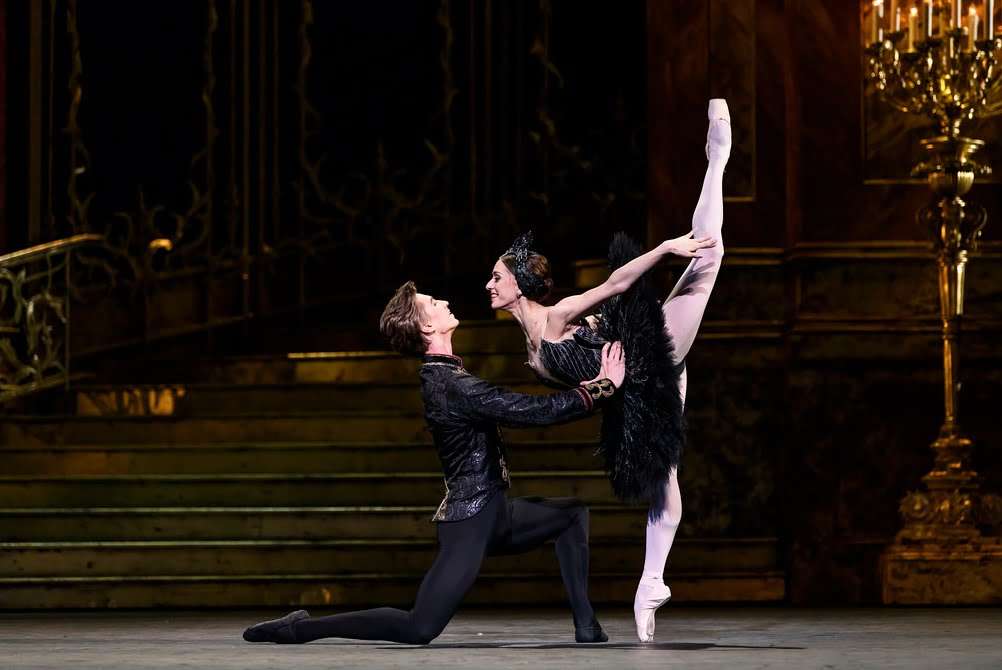 Scarlett’s own choreography shows his clear desire to create new movement which will not jar with what he has retained from the three revered masters of the past, although he cannot and rightly has not tried to mask his own style which includes elements unknown to his predecessors. His Classical choreography is just that, but contains some un-Classical combinations of steps and unusual ports de bras which will take a little getting used to, but are none-the-worse for that. His ‘take’ on Swan Lake’s movement palette is clearest in Act Four, which is entirely of his own invention, or almost; would that he had not chosen to borrow steps and movements from Ivanov’s Act Two – they sit uneasily with new music (there is even a brief reprise for the famed four cygnets) and they jar with his own. He opts for complicated stage patterns for the swan ensembles which struggle to make an impact from the stalls, but his new mournful pas de deux for the betrayed Odette and the repentant Siegfried, the stage cleared of all others, strikes the right note and builds to Odette’s decision to kill herself.

Guaranteed to leave many unsatisfied is Scarlett’s new ending in which Siegfried survives and recovers the body of the now human Odette from the waters of the lake, her spirit seen high above on the rocky outcrop which dominates this scene. It is a strangely muted ending, departs from the convention of the two protagonists being united in death as they were unable to be in life and is at odds with the swelling music of Tchaikovsky’s apotheosis. Similarly, Scarlett has opted to show us the abduction and transformation of the human Odette by the evil von Rothbart during the ballet’s overture (a device used in several other productions) which is fair enough in itself, but, in showing us the Swan Queen, it diminishes the impact of her first appearance in Act Two. 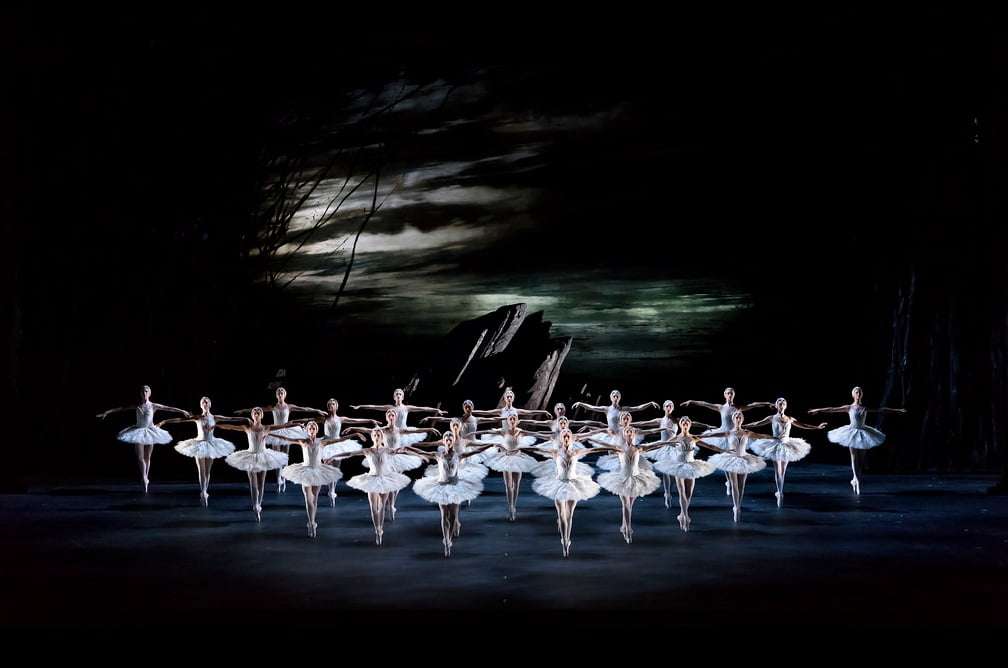 Elsewhere, there have been wholesale tidyings-up, with the removal of Prince’s tutor in Act One and the Court Chamberlain in Act Three, as well as what had become increasingly geriatric courtiers and hangers-on. There is a consequent beefing-up of von Rothbart who is now the sinister adviser to the Queen as well as an evil sorcerer, clearly intent on usurping the crown for himself, eager to marry the Prince off to further his own cause. This makes good sense and provides a powerful role. Similarly, Benno, Siegfried’s friend gets more to dance, taking the male role in the Act One pas de trois (which he dances with Siegfried’s two sisters), and repeating the combination at the beginning of Act Three’s ball in a trio set to Swan Lake musical off-cuts and which features some fleet-of-foot choreography which is not always of the most highest or most graceful quality. These three parts are now of some size and choreographic challenge and will provide strong showcases for the talents of the dancers who take them.

In all, this is a version which shows great respect for the company’s tradition in this ballet but which also bears Scarlett’s clear choreographic imprint. Certainly, the niggles are not enough to compromise the effect of the whole – purists will find fault but will also be largely satisfied that so much – Odette’s precious lakeside mime sequence included – has been preserved. As for Scarlett’s choreography, it is far from offensive and sits broadly within the Classical Petipa/Ivanov idiom, even if there are moments when one would have wished for greater breadth of dance vocabulary.

And so to the performance itself. Marianela Nuñez is an experienced Odette/Odile whose technical challenges hold little fear for her. She is perhaps not a natural Swan Queen, possessed as she is of uncommon strength and vitality and little vulnerability, and it took some time for her to register in Act Two. In Act Four, she had settled into the interpretation rather more, exuding a resigned and pained melancholy which would lead her to the character’s death. As Odile, she flashed, if not evil, then a minx-like seductiveness, beguiling the hapless Prince and dazzling him with her technical fireworks. It is rare to see Nuñez out-danced, but Vadim Muntagirov delivered a sensational masterclass on opening night, allying impeccable line and technique with musically sensitive phrasing, pyrotechnical physical feats with a depth of character which could not fail to impress. His Act Three ‘Black Swan’ solo was simply dazzling, the achievement of an artist at the very peak of his powers and elicited the loudest ovation of the evening.

Bennet Gartside was a chilling, sinister von Rothbart whose hatred of Siegfried crackled in the air; he is the engineer of the fateful ball, the duping of the prince and the destruction of the hopes of the Queen, a deeply regal yet equally troubled Elizabeth McGorian, one of the jewels of The Royal Ballet, such is her mastery of the stage. The final moments of Act Three as von Rothbart reveals himself as the hideous sorcerer that he is and the palace seems to crumble before our eyes is pure stage magic: with Gartside the dark centre of his own evil, the stage swarms with black swans, a biblical plague visited upon the court. 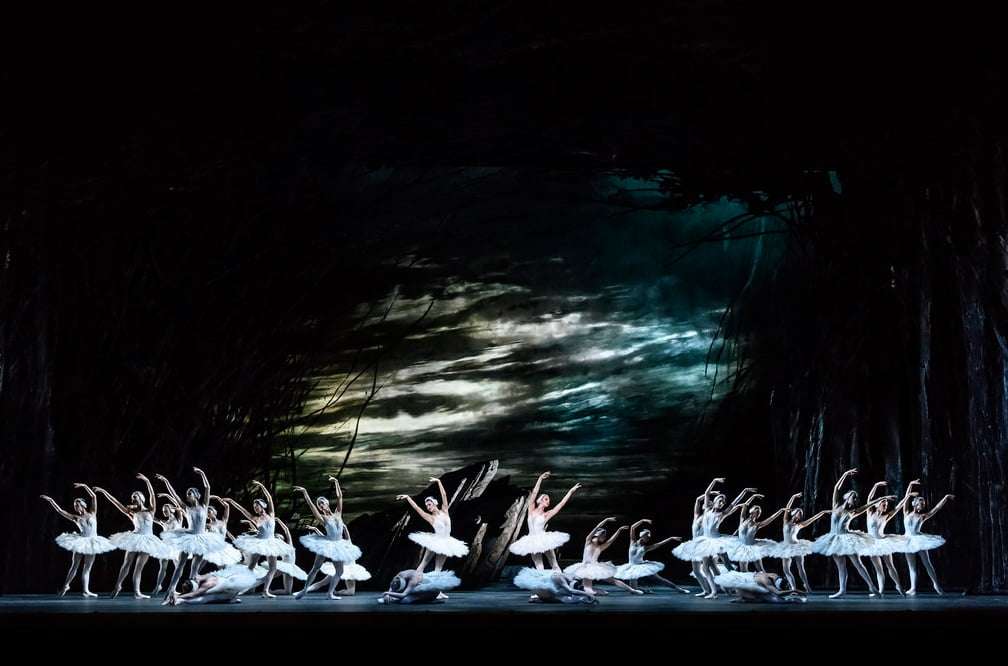 The expanded pas de trois had the luxury casting of three Principals – Alexander Campbell as Benno did what he could with a characterisation which seemed to channel the dubious traditions of the Soviet ballet jester, but danced with his customary lightness and speed, while Francesca Hayward exhibited tendril-like arms and Akane Takada remarkable ballon; the Act One Petipa pas de trois seems to have been softened, however, its jewel-like brilliance slightly dimmed. Hayward and Takada, as with all the women on pointe, made almost no sound, an old Royal Ballet convention which has been lost for several decades – it is simply good not to hear the swans thunder around the stage. Scarlett has introduced four differentiated princesses who attend the ball in the hope of being chosen as Siegfried’s bride, which again provides named roles for the company dancers, and who are nicely drawn in terms of their movements – Yuhui Choe as the Italian Princess was particularly crisp in her dancing.

The character dances were taken extremely well, especially the Czárdás led by Olivia Cowley and Tristan Dyer, who both were suitably farouche, although the famed Neapolitan suffered from the dancers seeming rushed by the admittedly fiendish choreography and not giving Ashton his stylistic due. The swan corps were not yet a single entity, lacking common musicality and, in some cases, placement. However, the two ‘big’ swans of Claire Calvert and Mayara Magri impressed with the expansive quality they brought to their dancing.

This new Swan Lake for The Royal Ballet is most welcome and provides a fine setting for the company and its dancers. Elements may well be altered as it beds down into the repertoire with different casts but the basis is firm. Scarlett, Macfarlane and The Royal Ballet can be well pleased with their considerable efforts.