Skip to content
LnRiLWNvbnRhaW5lcltkYXRhLXRvb2xzZXQtYmxvY2tzLWNvbnRhaW5lcj0iNmIzNDMzNmNmZTc3NWZiNGJlMTVjMmIwMzU3NWM1MjYiXSB7IHBhZGRpbmc6IDI1cHg7Ym94LXNoYWRvdzogNXB4IDVweCAxMHB4IDAgcmdiYSggMCwgMCwgMCwgMC41ICk7Ym9yZGVyOiAycHggZG90dGVkIHJnYmEoIDEwOSwgMTA4LCAxMDgsIDEgKTsgfSAudGItZmllbGRbZGF0YS10b29sc2V0LWJsb2Nrcy1maWVsZD0iODM3Y2ExZjc0MGRjZDdkOTdlMzQzOWMyYjIwMWZmZTMiXSB7IGJhY2tncm91bmQtY29sb3I6IHJnYmEoIDIzOCwgMjM4LCAyMzgsIDEgKTtwYWRkaW5nLXRvcDogMTBweDtwYWRkaW5nLWJvdHRvbTogMTBweDtwYWRkaW5nLWxlZnQ6IDEwcHg7IH0g
LnRiLWNvbnRhaW5lcltkYXRhLXRvb2xzZXQtYmxvY2tzLWNvbnRhaW5lcj0iNmIzNDMzNmNmZTc3NWZiNGJlMTVjMmIwMzU3NWM1MjYiXSB7IHBhZGRpbmc6IDI1cHg7Ym94LXNoYWRvdzogNXB4IDVweCAxMHB4IDAgcmdiYSggMCwgMCwgMCwgMC41ICk7Ym9yZGVyOiAycHggZG90dGVkIHJnYmEoIDEwOSwgMTA4LCAxMDgsIDEgKTsgfSAudGItZmllbGRbZGF0YS10b29sc2V0LWJsb2Nrcy1maWVsZD0iODM3Y2ExZjc0MGRjZDdkOTdlMzQzOWMyYjIwMWZmZTMiXSB7IGJhY2tncm91bmQtY29sb3I6IHJnYmEoIDIzOCwgMjM4LCAyMzgsIDEgKTtwYWRkaW5nLXRvcDogMTBweDtwYWRkaW5nLWJvdHRvbTogMTBweDtwYWRkaW5nLWxlZnQ6IDEwcHg7IH0g
Tchaikovsky
The Nutcracker, Op.71 – Ballet in two Acts to choreography by Peter Wright after Lev Ivanov, based on an original scenario by Marius Petipa after E. T. A. Hoffmann’s Nussknacker und Mausekönig
LnRiLWNvbnRhaW5lcltkYXRhLXRvb2xzZXQtYmxvY2tzLWNvbnRhaW5lcj0iNmIzNDMzNmNmZTc3NWZiNGJlMTVjMmIwMzU3NWM1MjYiXSB7IHBhZGRpbmc6IDI1cHg7Ym94LXNoYWRvdzogNXB4IDVweCAxMHB4IDAgcmdiYSggMCwgMCwgMCwgMC41ICk7Ym9yZGVyOiAycHggZG90dGVkIHJnYmEoIDEwOSwgMTA4LCAxMDgsIDEgKTsgfSAudGItZmllbGRbZGF0YS10b29sc2V0LWJsb2Nrcy1maWVsZD0iODM3Y2ExZjc0MGRjZDdkOTdlMzQzOWMyYjIwMWZmZTMiXSB7IGJhY2tncm91bmQtY29sb3I6IHJnYmEoIDIzOCwgMjM4LCAyMzgsIDEgKTtwYWRkaW5nLXRvcDogMTBweDtwYWRkaW5nLWJvdHRvbTogMTBweDtwYWRkaW5nLWxlZnQ6IDEwcHg7IH0g 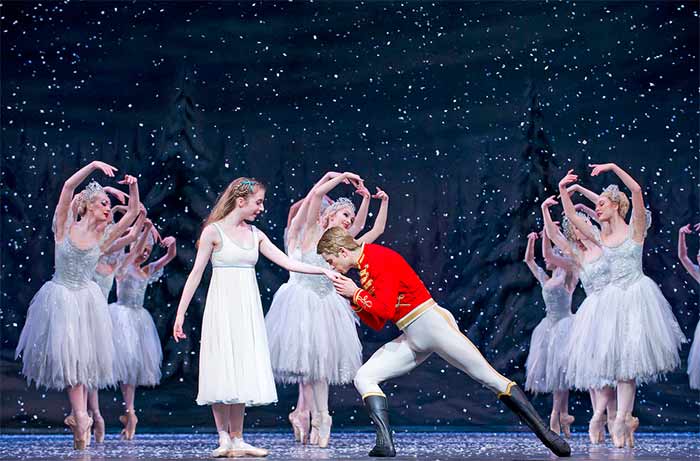 Three cheers for Sir Peter! Sir Peter Wright, the Grand Old Man of British ballet celebrates his 90th birthday, an apposite moment to pay tribute to his immense contribution to Classical Dance in this country and also to salute the dramatic rightness, the choreographic integrity and the theatricality of his productions of the classics, which are now presented by companies the world over. At the end of this revival of his peerless Nutcracker at Covent Garden, the glitter fell, the cake was presented, and the paeans were spoken, the stage filled with dancers from the most senior to the new entrants at the Royal Ballet School, White Lodge, supplemented by the great and the good of British ballet. Kevin O’Hare paid tribute to Sir Peter whose reply was characteristically generous, both to the company and also to two people whom he reveres; Dame Ninette de Valois, founder of The Royal Ballet, and Sir Frederick Ashton, its founder choreographer, two names now rarely heard spoken of at Covent Garden, and even less frequently praised, as O’Hare steers the company into waters populated with Wayne McGregor, Christopher Wheeldon et al.

Preceding the ceremonies, this was a fine performance of The Nutcracker, revived to delight the poppets and to fill the Opera House’s coffers. Wright’s is a superb version, and in this reviewer’s mind is the best around, a delicious Biedermeier confection that provides a splendid setting for the work. It is a pity that the veteran Russian conductor and a somnolent ROH orchestra gave an, at times, muted and underpowered rendition of Tchaikovsky’s score, the orchestral balance not always well-judged – in the Snowflakes scene, the brass overpowered the distant strings – tempos were often sluggish. However, the company is dancing as a real ensemble, the first Act party scene brimming with characters and tiny detail. This is one of Wright’s trademarks, and fully in the British ballet tradition; people are not just ‘crowd’ but each has a character and a reason for doing what they do. It can be traced back to our national dramatic stage traditions but also to the Ballets Russes, where detail was the thing, so that Mikhail Fokine’s fair scenes in Petrushka are peopled with individuals and not choreographic rhubarb. 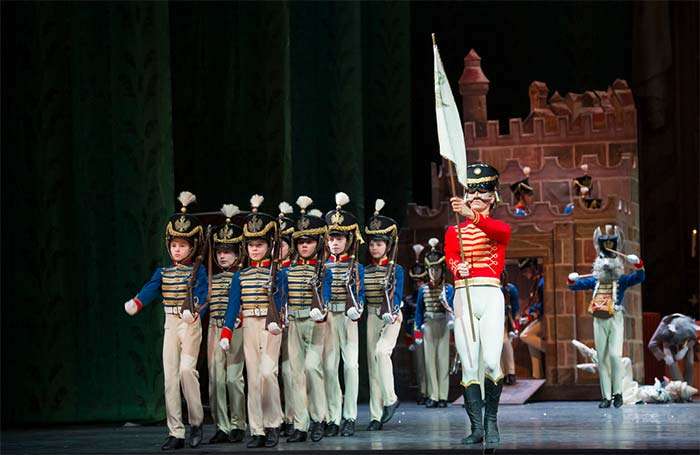 In the purely classical dancing of the Snowflakes scene and the Act Two Mirlitons and Waltz of the Flowers, the company was bright and lively, even if their particular classicism is now less focussed than in times past, less coherent, less identifiable as ‘Royal Ballet’. Heads are now not uniform in tilt, arms not quite at the same angle, the interpretation of épaulement not shared among all the dancers. The company is now dancing less of the classics and ‘neo-classics’ than at any time in living memory – it is having a visible effect. Solos tend to fare better with focussed coaching, so that the central couple of the Sugar Plum Fairy and her Prince was a display of impressive purity suffused with intelligent musicality.

Lauren Cuthbertson and Federico Bonelli make for a handsome couple and are well suited to each other both physically and temperamentally, so their grand pas de deux was a true highlight of the evening, he elegant and attentive, she grand of manner with a sharp musicality in her famous solo. Francesca Hayward as Clara was fresh and endearing, her dancing characterised by an open quality, noticeably in her upper torso and arms, which was youthful and spontaneous. She was ably partnered by Alexander Campbell, also a newly-appointed principal this season, who brought his characteristic attention to placement and proportion to his dancing. Both he and Hayward are not tall but combine classical correctness with a strong stage personality, a typically ‘British’ amalgam which leads to interesting performers and performances. 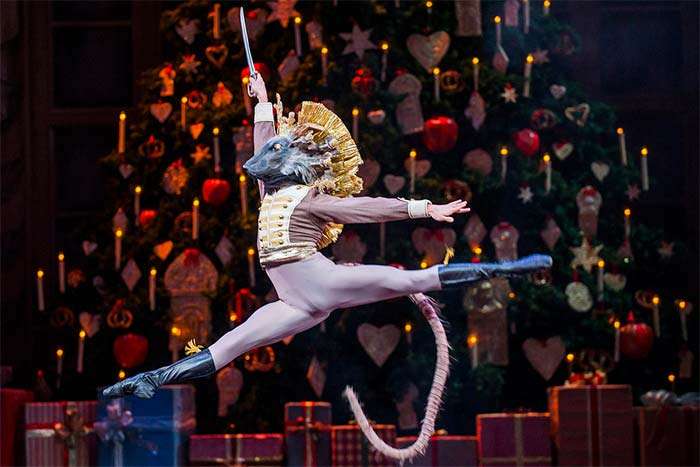 Gary Avis was a characterful Drosselmeyer, but, if I have one quibble, it is the ‘beefing up’ of this role in this production by Wright; since 1984, when it premiered, the part has become more and more central, more of a master of ceremonies-cum-magician. He is now almost intrusive, especially in his bright-blue cloak which, in the Kingdom of the Sweets in particular, clashes with the colour palette in Julia Trevelyan Oman’s still-enchanting designs. Many dancers made their mark in small parts – Tristan Dyer as Clara’s partner in Act One and with Paul Kay in the Russian Dance in Act Two, and Marcelino Sambé, a virtuoso soldier doll in Act One and in tandem with Luca Acri in a new Chinese dance in Act Two, both fleet-of-foot and spinning like tops. Praise too to little Caspar Lench as Fritz, Clara’s little brother, a diminutive pupil at the RBS but brimming with character and boyish naughtiness.

The company did Sir Peter proud at this performance – he has been described as the ‘best director the Royal Ballet never had’. Both his productions and what he represents in terms of core artistic values are precious indeed to the company’s character and history. O’Hare stated that those productions would remain in the repertoire for a very long time; at a time when he is actively pulling away from the company’s past, let us hope that is true… for the sake of The Royal Ballet and its future dancers and audience.