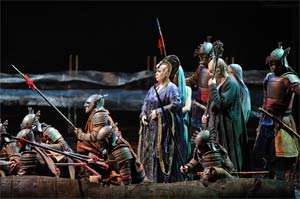 “Aida” is a notoriously difficult opera to pull off as, largely because of the triumphal scene of Act Two, it is many people’s idea of what Grand Opera is all about. That brings a certain expectation. I have never seen a truly satisfying production in some 30-plus years! Any production team taking on the work has to decide whether or not to go acknowledge Verdi’s Egyptian setting, now so encumbered with ‘tradition’, or to go for something more abstract and subtle. In this new Royal Opera staging David McVicar and his associates seem to have made a conscious decision to eschew all the usual trappings and to present a more time-less depiction of two neighbouring nations involved in a cruel genocidal war. Prisoners become human sacrifices, and savage militarism and self-preservation dominate everyone’s waking lives. So far, so good – as the themes of patriotism, war, entrenched positions and the wrongs that religious fanaticism can engender are very much part and parcel of the piece and have undoubted relevance. And in the midst of this there is personal human tragedy.

Jean-Marc Puissant’s set designs are very dark and austere, and changes are enacted swiftly by means of a central evolve. There are abstract images of the Nile flowing turbulently across the backdrops – the landscapes are bleak indeed, emphasising the destructive effects of war. The dark is oppressive but the setting of the final scene perhaps lacks a real scene of claustrophobia. Costuming is a curious mix of styles, but the head-dresses do not always allow the singers to communicate expression freely. Although the stage is dark the audience does need to be able to see faces! What is curious about the final result however is that the staging and the drama often lack intensity and focus, and somehow it felt as if the energy spent on trying to do something conceptually new had resulted in a rather traditional staging but in a different setting. McVicar is usually better at enlivening crowd scenes than in this production – even allowing for the necessity of accommodating dancers delivering some provocative choreography and lightly-grunting martial-arts practitioners. Indeed, an occasional tendency to have too much obtrusive extra activity has irritated in past work (and there is one very distracting ‘extra’ in the final scene). 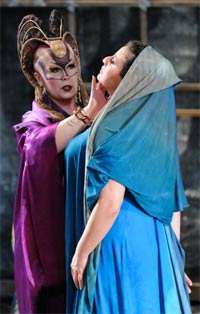 When it comes to the principals it often seems as if an old-style operatic stand, sing and semaphore were at play, too. The characters’ emotional dilemmas and journeys seemed rather superficially enacted. One rarely felt moved by Aida’s plight, Radames’s internal conflict between his love for Aida and his desire to succeed as a soldier, Amneris’s desperation to win Radames and her all-consuming jealousy of Aida or even annoyed by the emotionally manipulative Amonasro and the implacability of Ramfis and the priests. This is big operatic stuff – but it wasn’t here!

Perhaps some of the problems lay in some significant cast changes. Verdi’s demands on the lead singers are huge, and heaven knows there seems to be a lack of singers with the technique and style to deliver some of these great Verdi roles these days – the part of Aida, for example. The singer must have iron control of dynamics to be able to deliver well the piano and high-lying lines of Acts One and Three; and in Act Three she must have the resources for some dramatic outbursts. Micaela Carosi’s voice is ample in size, and has an attractive tone when not under too much pressure. Too often though vibrato became obtrusive, and her attempts to lighten tone and lower volume often lacked finesse making her seem ill-at-ease and over-parted. One sympathised with her personally – probably at the expense of her portrayal.

Marianne Cornetti has the vocal guns for Amneris as she proved in her great Act Four scene, but elsewhere her singing lacked the incisive delivery and beauty of tone in the higher reaches that the part ideally needs. She was the singer most hampered by her head-dress, and surely Amneris needs more fluidity of movement to contrast with the more static, imposed-upon Aida. 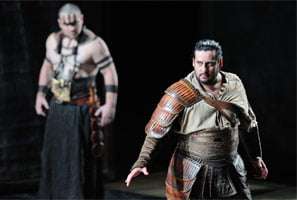 Marcelo Álvarez too sounded taxed by the demands of Radames. He perhaps lacks the trumpet-like tonal quality one would wish for at the soldier’s more heroic and desperate passages, but when the more amorous and humane aspects of Radames were to the fore he sounded more convincing. Phrasing was decent, but not always ideally fluid. Marco Vratogna’s Amonasro captured the steely and manipulative side of the character but he has his moments of lyricism and passion too, and these aspects were somewhat muted. Robert Lloyd was a tower of vocal strength as the Pharoah, an object-lesson into how to make much of little; and although Giacomo Prestia has a deep and sonorous voice he simply did not impose himself dramatically as Ramfis should. Elisabeth Meister’s High Priestess was very well sung, and the murmuring chorus was fantastic in the temple scene of Act One.

Under Nicola Luisotti, the Royal Opera Orchestra was on fine fettle and there were moments when passages of the score leapt to life – particularly in the temple scene and also in the accompaniment to both of Aida’s arias, ‘O patria mia’ in particular, and the build-up to the Judgement Scene. These interpretative peaks were not wholly sustained, however, and one could argue that the brilliancy of the Triumphal Scene sounded hollow and unconvincing – though I think it is meant to. Nevertheless it was the orchestral performance that proved the most edifying and stimulating part of the evening.

The overall impression left by this first-night performance was that a serious and considered attempt to re-evaluate this work in a manner deliberately without grand operatic sheen and brilliancy had somehow failed to generate that theatricality and lustre that “Aida” needs.