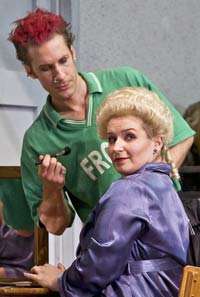 This is the second revival of The Royal Opera’s 2002 production of “Ariadne auf Naxos”, and if on this first night it was not entirely settled that may have partly been due to a few technical difficulties that resulted in a prolongation of the already over-long interval that lost some of the dramatic and musical impetus. A shame as the performance of the ‘Prologue’ was fleet and witty and had set the scene so very well. This production starts with something of a visual and coup de théâtre, a stylish scene setter.

There were musical felicities as well. The Prologue rightly belongs to The Composer and in Kristine Jepson found an interpreter with a lovely, secure and velvety voice matched with acting that made the character credibly naïve and idealistic and later disillusioned. She was particularly good at capturing The Composer’s changes of mood and the making his moments of musical inspiration seem natural. The 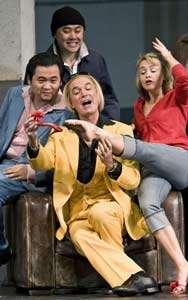 passage towards from ‘Sein wir wieder gut’ through to the impassioned ‘Musik ist eine heilige Kunst’ was thrillingly sung. It probably helps to have the expert Music Master of Thomas Allen to play against – another great cameo from his store-cupboard of characters. However, there was a true sense of ensemble from all the protagonists, even the very minor ones, with Deborah Voigt and Robert Dean Smith bringing The Prima Donna and The Tenor to comedic life in their brief contributions. I particularly liked the latter’s blurted interjection after The Major-Domo’s announcement about the simultaneous playing of burlesque and opera being a pretend vocal test. Alan Oke also made much of the Dancing Master, who has some great tunes and the best lines (particularly that one about all operas having boring bits that can be cut).

Alexander Pereira was a late replacement for Christopher Quest in the speaking part of The Major-Domo, and his interpretation missed some of its inherent humour by being too knowing and over animated. Surely half the point is that whilst The Major-Domo is enjoying the havoc he is causing backstage he should be a jobs-worth professional to a tee, and as pompous and arrogant as his unseen rich master.

Keeping the pace wonderfully propulsive and fluid was Mark Elder (recently announced a Knight and awaiting the sword!) who elicited some fantastic playing from his small group of players both here and in the ‘Opera’ proper. There was some fabulous woodwind playing from flute and oboe, and the lower strings were wonderfully mellow. The harmonium and the percussion made telling contributions as well. As Elder refused to allow any sense of indulgence, the final 40 minutes from the arrival of Bacchus onwards was much more compelling than it can be with conductors who milk the Straussian lushness to extremes. In fact I’m not sure I’ve ever found the orchestral passage depicting the arrival of Bacchus quite so exhilarating. That Robert Dean Smith gave a superbly sung and apparently effortless account of this high-lying and strenuous role really helped. Best of all he managed the final outburst in some thrillingly ardent singing. (Richard Margison takes this role on June 21 & 25.) 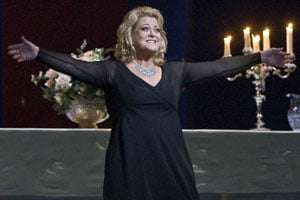 Deborah Voigt took a little time to hit form as Ariadne. ‘Ach! – Wo war ich?’ had a very minor mishap towards the end, and ‘Ein Schönes war’ did not quite have the fluidity it needs. But then she rallied and from ‘Es gibt ein Reich’ onwards proved herself the great Straussian of her reputation. Up high her voice is thrillingly open and rich, and she has an endearing stage presence, remaining wonderfully statuesque amidst the mayhem of the Commedia dell’arte passages.

Gillian Keith was making her role debut as Zerbinetta. In the ‘Prologue’ she seemed a bit under-powered and a tad one-dimensional, but in the ‘Opera’ she rose to the challenge of the impossible ‘Großmächtige Prinzessin’ which she sang with full technical control and with dramatic point as the character describes her ready capitulation to every “god” who comes along. She captured the inner vulnerability of the character, highlighted when it became clear that her brief dalliance with Harlequin had perhaps come to an unhappy end – one of the strong points of direction in this production. Keith’s voice whilst agile is not always the most tonally varied; with experience she should find ways of bringing a little more variety to her narration of her escapades with her various lovers.

The trio of Naiad, Dryad and Echo were suitably mellifluous and luscious, and the quartet of men from Zerbinetta’s troupe was nicely interactive and also blended nicely, although Markus Werba made less of Harlequin than some predecessors have.

So this is a strong revival musically, for which Mark Elder must take much of the credit; without the tension-sapping technical problems it will become tauter dramatically too.