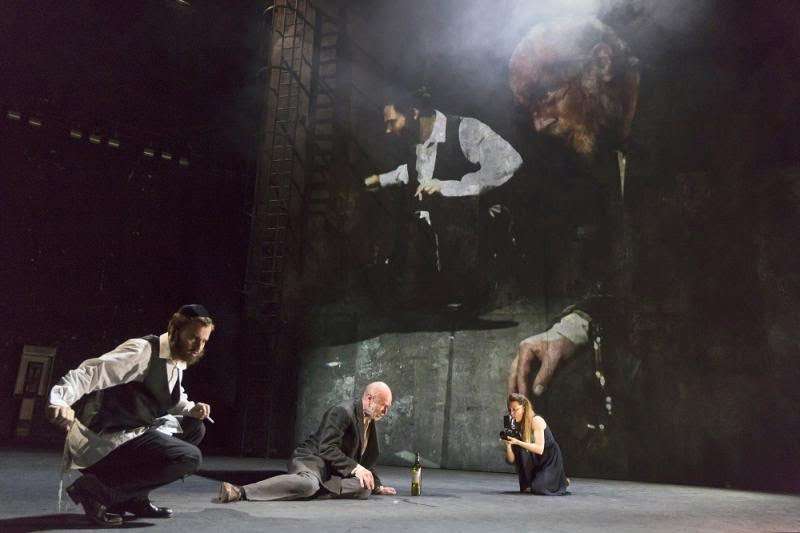 Despite its blunt and near-tautological title, Na’ama Zisser’s new opera – the fruit of her “young composer residency” at The Royal Opera – is diffuse and elusive. In some ways it is meant to be, as the central character, Yoel, has fled his Jewish Hasidic home in New York during a blackout on a summer night in 1977, prior to his arranged marriage, which prompts his urge towards some drastic soul-searching. Whilst on the run during that terrifying but revelatory night, he discovers from the Stranger that he is such a mamzer, that is, somebody who is born of a forbidden relationship, and so is deemed by Jewish law to be an outcast from the community (in accordance with the pronouncement in the book of Deuteronomy). In this case Yoel’s mother had married again on believing that her first husband had died, though that turned out not to be true. The penalty incurred by the offspring of such a relationship is that they are prohibited to marry, as are their descendants down to ten generations.

Zisser’s work evokes that Jewish environment fluently and confidently in that she embeds a selection of Hasidic cantorial songs within her continuous score, apparently the first time this has been done in the medium of opera. In a sense they serve as moments of lyrical reflection in a similar manner as the arias of a conventional stage-work; but as a repository of religious musical expression, they also function as a deeper, ritualistic framework like the Lutheran chorales of J. S. Bach’s Passions, or the American spirituals of Tippett’s A Child of Our Time. They sit well in the musical context of Zisser’s score as they complement the half-spoken delivery of much of the surrounding text. This is set to music couched in similar musical modes, such that the vocal lines generally proceed by small steps of a tone or minor third – and often in a sad, downward direction – which occasionally widen to a tritone, for example, acting as a fulcrum on which the melody turns and organically extends itself, as well as implying the harmonies which are not fully realised by the sustained background chords of the accompaniment. 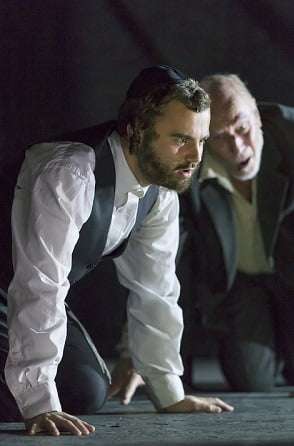 Where the music is more successfully and deliberately suggestive, the narrative itself is harder to follow despite, or perhaps because of, being embedded within a deceptively unified and steady accompaniment (albeit rather like a soundtrack) which is ably sustained by the Aurora Orchestra under precise conducting from Jessica Cottis, and amplified into the auditorium. Certainly the libretto by Samantha Newton, and Zisser’s sister, Rachel, conjures up a Jewish world in summoning up personal, social, and religious memory as the characters allude to their experiences as Jews in the synagogue and at home; as standing within an innumerable series of preceding generations who have borne witness to the same faith and customs before them; and as an immigrant community in America, facing the uncertainty and danger of persecution that entails.

The story of a renegade who returns home in the light of greater self-knowledge is a classic Jewish trope: non-Jews need only think of the parable of the Prodigal Son in St Luke’s Gospel. But there is also (ironically perhaps) a tantalising link with Wagner’s self-absorbed heroes who seek to come to terms with a deeply unsatisfactory state of affairs in the world around them, for which they carry no blame, but take on themselves great responsibility. In having Yoel’s mother, Esther, called “Herzeleth” at one point, there is surely a conscious allusion to Parsifal, whose mother is named Herzeleide (“heart’s sorrow”).

Interaction between the musical and literary dimensions is cogent, then. The relations between memory and present narrative are not always clearly demarcated, however, as the work shifts between the compelling, mimetic enactment of the drama itself, and the meta-theatrical elements which draw attention to the unfolding of this as like a documentary, evinced by the presence of Pauline Jurzec’s non-singing Cinematographer recording events on camera, and by the projection of scenes from the chaos of the blackout on to a bare wall at an oblique angle within one half of the set. The latter is otherwise desolate, except for a couple of overturned chairs, and dry mikveh (a bath for ritual immersion). As such it is, potentially, as dramatically persuasive as the score, but as a piece of music-theatre it feels as though it needs to decide between the symbolic and the literal. 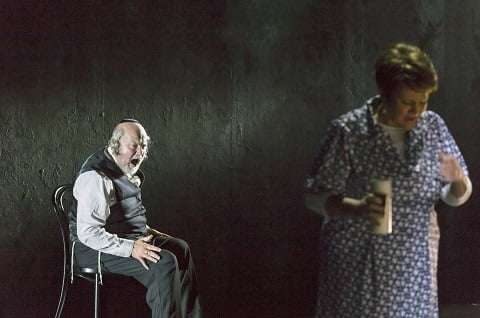 Nevertheless the performers convince with their musical eloquence, tinged with a melancholic tone that underlines the impression of this drama as more like the expression of an interior dialogue rather than overt stage action perhaps. As a professional cantor, Netanel Hershtik brings authentic liturgical rigour to the songs sung by David, but Gundula Hintz and Robert Burt give authoritative performances as Yoel’s parents. The frequent use of Yiddish words in the libretto is no impediment to them, and Collin Shay sustains an ethereal countertenor line as Yoel that provides haunting colour to the artful simplicity of Zisser’s vocal writing. Steven Page is a strongly characterised Stanger.

Initially the work seems arcane, apparently without very much to win round the sympathetic engagement of a general audience who may know little or nothing about Jewish culture. But as it proceeds, the threads are drawn more closely and consistently together, such that its themes of identity and belonging should strike a chord beyond the particularities of the drama’s immediate context with those who may otherwise find it, either on that account or its dramatic obscurity, only periodically illuminating or self-explanatory.