Skip to content
LnRiLWNvbnRhaW5lcltkYXRhLXRvb2xzZXQtYmxvY2tzLWNvbnRhaW5lcj0iNmIzNDMzNmNmZTc3NWZiNGJlMTVjMmIwMzU3NWM1MjYiXSB7IHBhZGRpbmc6IDI1cHg7Ym94LXNoYWRvdzogNXB4IDVweCAxMHB4IDAgcmdiYSggMCwgMCwgMCwgMC41ICk7Ym9yZGVyOiAycHggZG90dGVkIHJnYmEoIDEwOSwgMTA4LCAxMDgsIDEgKTsgfSAudGItZmllbGRbZGF0YS10b29sc2V0LWJsb2Nrcy1maWVsZD0iODM3Y2ExZjc0MGRjZDdkOTdlMzQzOWMyYjIwMWZmZTMiXSB7IGJhY2tncm91bmQtY29sb3I6IHJnYmEoIDIzOCwgMjM4LCAyMzgsIDEgKTtwYWRkaW5nLXRvcDogMTBweDtwYWRkaW5nLWJvdHRvbTogMTBweDtwYWRkaW5nLWxlZnQ6IDEwcHg7IH0g
LnRiLWNvbnRhaW5lcltkYXRhLXRvb2xzZXQtYmxvY2tzLWNvbnRhaW5lcj0iNmIzNDMzNmNmZTc3NWZiNGJlMTVjMmIwMzU3NWM1MjYiXSB7IHBhZGRpbmc6IDI1cHg7Ym94LXNoYWRvdzogNXB4IDVweCAxMHB4IDAgcmdiYSggMCwgMCwgMCwgMC41ICk7Ym9yZGVyOiAycHggZG90dGVkIHJnYmEoIDEwOSwgMTA4LCAxMDgsIDEgKTsgfSAudGItZmllbGRbZGF0YS10b29sc2V0LWJsb2Nrcy1maWVsZD0iODM3Y2ExZjc0MGRjZDdkOTdlMzQzOWMyYjIwMWZmZTMiXSB7IGJhY2tncm91bmQtY29sb3I6IHJnYmEoIDIzOCwgMjM4LCAyMzgsIDEgKTtwYWRkaW5nLXRvcDogMTBweDtwYWRkaW5nLWJvdHRvbTogMTBweDtwYWRkaW5nLWxlZnQ6IDEwcHg7IH0g
Weill
Rise and Fall of the City of Mahagonny (Aufstieg und Fall der Stadt Mahagonny) – Opera in three Acts to a libretto by Bertolt Brecht [sung in an English translation by Jeremy Sams, with English surtitles]
LnRiLWNvbnRhaW5lcltkYXRhLXRvb2xzZXQtYmxvY2tzLWNvbnRhaW5lcj0iNmIzNDMzNmNmZTc3NWZiNGJlMTVjMmIwMzU3NWM1MjYiXSB7IHBhZGRpbmc6IDI1cHg7Ym94LXNoYWRvdzogNXB4IDVweCAxMHB4IDAgcmdiYSggMCwgMCwgMCwgMC41ICk7Ym9yZGVyOiAycHggZG90dGVkIHJnYmEoIDEwOSwgMTA4LCAxMDgsIDEgKTsgfSAudGItZmllbGRbZGF0YS10b29sc2V0LWJsb2Nrcy1maWVsZD0iODM3Y2ExZjc0MGRjZDdkOTdlMzQzOWMyYjIwMWZmZTMiXSB7IGJhY2tncm91bmQtY29sb3I6IHJnYmEoIDIzOCwgMjM4LCAyMzgsIDEgKTtwYWRkaW5nLXRvcDogMTBweDtwYWRkaW5nLWJvdHRvbTogMTBweDtwYWRkaW5nLWxlZnQ6IDEwcHg7IH0g 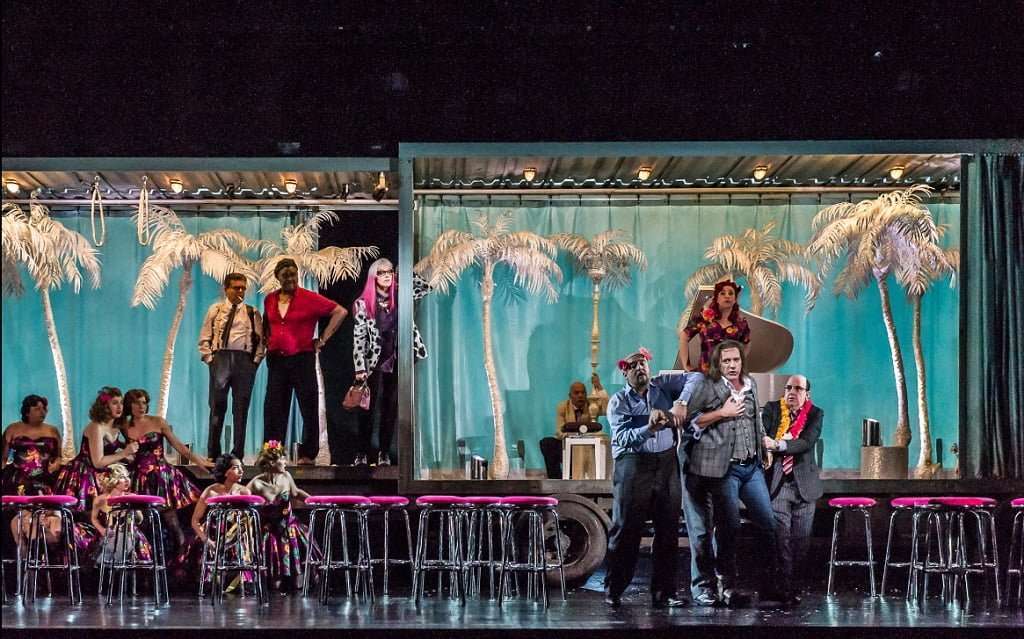 You’d have thought that Brecht and Weill’s dystopian view of capitalism would resonate loudly in a city currently as unbalanced by wealth as London. However, John Fulljames’s staging for the Royal Opera (its first) keeps Brecht’s Marxist satire of a society gripped by excess at arm’s length as a moral fable, in fact increasing the distance with some topical additions in the narrative-links to global warming, as the hurricane that threatens Mahagonny gathers force. Bearing no relation to the Royal Opera’s eye-catching poster, the main element of Es Devlin’s set is a shipping container, a much-visited image of alienation, separation and impermanence, just one in the first Act, which opens to reveal Jenny and her girls as illegal immigrants who become the new, instant city’s first inhabitants, then after the interval a tottering pyramid of them, as the world flocks to its anything-goes style, which could be anywhere, not just the glittering “Amerika” so firmly in Brecht’s line of fire.

The other big element is Finn Ross’s excellent video work, which moves effortlessly from film noir references to turbulent weather maps, to film of frozen Alaska that decent Jimmy and his mates have abandoned for a life of pleasure, ghostly footage of the city’s ceaseless activity and, near the end, live film of the stalls audience projected back to them – the last a reprimand to the privileged few that fell flat. The projections also show the didactic links that herd the audience through the opera’s episodes and which, like any piece of agitprop, tells us what to think. 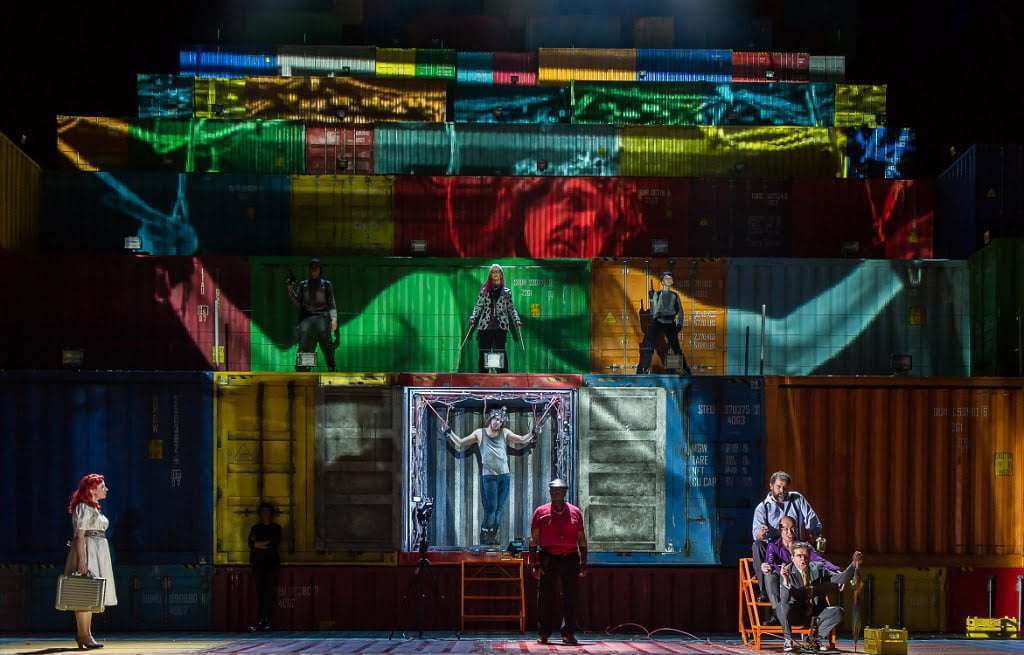 Yet, for all Jimmy’s friend Jack eating himself to death, the scene (once deemed profoundly shocking) of men queueing-up for Jenny’s prostitutes, or the corruption behind Jimmy’s execution when he can’t pay his bills, it all felt tame, the opera world trying to get down, dirty and demotic. Mahagonny may fit well into a large opera house, but its message is better suited to a smaller, more intimate space, and this staging hasn’t resolved this tension.

Musically, it was very slick and sophisticated. Mark Wigglesworth picked his way securely through Weill’s arsenal of influences – Bach, Mozart, Wagner, cabaret, jazz, you name it – and the playing was very fine, but with not much of the astringent edge to match Brecht’s mordant sarcasm. ‘Oh moon of Alabama’, for all its beauty, has more barbs in it than here; and I’d forgotten how the opera is haunted by a tune that threatens to morph into ‘Mack the Knife’ from The Threepenny Opera. 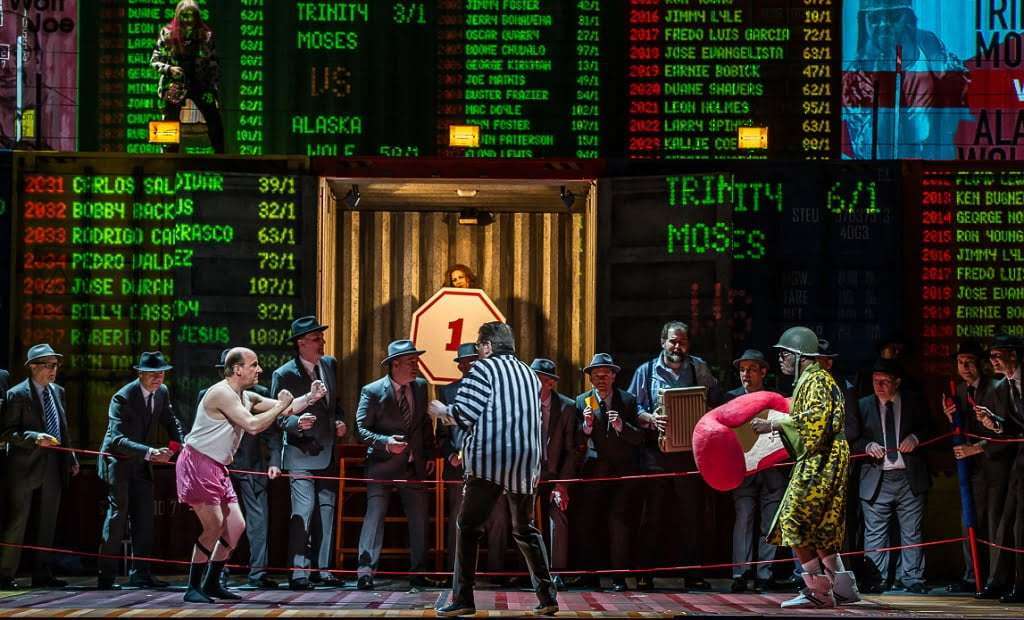 Sympathies are stretched further by characters conceived as political ciphers. Anne Sofie von Otter, unrecognisable beneath a blonde and pink metallic wig, plays the city’s founding ‘mother’ Widow Begbick in a weird accent (Cockney via finishing school), and the disconnect between her speech and singing was extreme. Willard W. White fleshed out her henchman Trinity Moses with his agile feel for comedy and a cleverly crafted music-theatre singing style, complemented by Peter Hoare’s generously sung Fatty. Christine Rice made the most of Jenny’s cabaret aspirations as she led her sextet of whores through a swooning ‘O Moon of Alabama’ and her song about making the bed you lie in, and Kurt Streit as the opera’s hero Jimmy deployed his soaring tenor in a bold, defiantly pro-opera way that Brecht, chipping away at the foundations of romantic opera, might have thought didn’t tow the party line.

Jeremy Sams’s new translation seems fluent and of its time. The opera house was tricked out with mood-setting slogans, much in the same way, but not so gleefully, as for ROH’s staging of Anna Nicole – now there’s a work that sums up certain aspects of the human condition.

By the time we got to Jimmy’s ‘Christian’ crucifixion, though, I was wondering whether it was worth keeping up with Brecht’s didactic cynicism. For many in the audience, I suspect, Winston Churchill’s view – that the inherent vice of capitalism is the unequal sharing of blessings; the inherent virtue of socialism is the equal sharing of miseries – never rung more true.