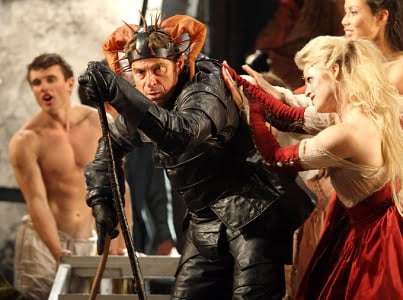 Rigoletto retains its hold on the opera-going public by virtue of its strong music, vividly etched characterisation and compelling melodrama. It seems that even a production as implausible as this one – first seen at Covent Garden in 2001 – cannot sink it (down the road at the Coliseum, an almost equally silly farrago has also done good business). This revival, with an amazingly polyglot cast, boasts two outstanding vocal performances which help the evening to pass without too much irritation.

Simon Keenlyside brings his portrayal of the title role to this house for the first time, having already sung it in Vienna and Cardiff. It would grace any stage in the world. He has a magnificent voice and it seems to get more Italianate, and further inside the Verdi style, with every role he undertakes. He varies his dynamics with great skill and sensitivity and gets the noble side of the character exactly right. About the bite and sarcasm of the jester, I am less sure, and a purely technical aspect of his singing – which, I hasten to say, he shares with virtually every modern Rigoletto – is a little disappointing. Here I must take issue with Susan Rutherford’s statement, in her interesting programme article, that “Rigoletto … has a mode of singing that is predominantly parlante”. There is a major element of bel canto in the role; and baritones of a bygone age, such as Antonio Scotti and Pasquale Amato, used to sing the legato passages of the duets between Rigoletto and Gilda with a cantabile thread of tone almost like a cello. Well, even without that propensity, the duets in this revival have great power and intensity. 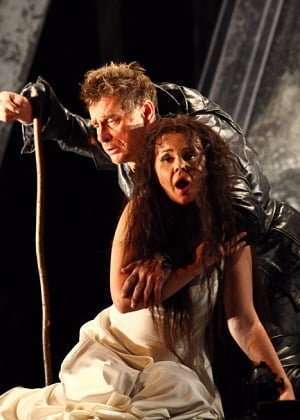 Of course, it takes two to make a duet work, and in Aleksandra Kurzak we have a Gilda of wonderful quality, among the best exponents of this role that I have heard in some 60 years of Rigolettos. The Polish soprano has a lovely voice of excellent volume and projection, which she controls with immense artistry. In the difficult aria ‘Caro nome’, on this first-night, Maurizio Benini allowed her an unusual amount of expressive liberty, which she used to great effect. Any grumbles that she was trying to be too artistic, I would disagree with. Virtually duetting with leader Peter Manning’s superb violin obbligato, Kurzak had me in thrall (what a pity it was that thoughtless, ill-timed applause interrupted the close of this scene). In the duets, she appeared to have an instinctive understanding with Keenlyside and their collaboration reached its peak in the final tragic moments of the opera. She also acted well in a role that can seem a little … well … soppy.

I cannot understand why ROH keeps asking the Albanian tenor Saimir Pirgu back: he has none of the graces that can make us like the Duke of Mantua, despite his appalling behaviour and against our better judgment. ‘Questa o quella’, not even well tuned, was completely lacking in wit and although his singing improved a little during the evening, his feeling for the character did not. When singing out, he makes quite a reasonable sound, and he can produce a sort of croon as a substitute for a proper mezzo voce, but the subtleties which should lie between those two extremes are beyond him.

David McVicar’s production and Michael Vale’s set have not aged well. I can hardly believe it when I recollect that some of my colleagues used to criticise Franco Zeffirelli’s fine production: he may have over-elaborated but at least he respected the composer and the librettist. McVicar and Vale give us a Gonzaga court that looks more like Dirty Dick’s or the basement at Gordon’s wine bar. It was the Gonzagas of Mantua, you may recall, who were famed for the sumptuousness of their court and employed some of Italy’s greatest painters, not to mention a musician named Claudio Monteverdi. Just one of McVicar’s vulgarities is that he has the courtiers run everywhere, yelp like dogs and generally behave like football supporters at chucking-out time. Verdi’s and Piave’s courtiers would never run anywhere: they would be too aware of their own importance, like any courtiers. In the opening scene, the dance music, which I rather like to hear, is blanked out by the noise of McVicar’s blatant orgy. I am willing to believe that at a Gonzaga banquet, when a certain amount of wine had been drunk, some fondling of women took place. But at the Duke’s daytime levee? What we see here is vulgar sensationalism. Tanya McCallin’s costumes are drab, as is the lighting scheme.

As for Vale’s set, I have already mentioned the poverty of the court scenes, where the sole concession to Gonzaga magnificence is a sort of antique computer chair. When Rigoletto enters looking for his daughter, the courtiers remark that he is searching everywhere, but there is nowhere for him to search. If I may dignify Vale’s effort with the odd supposition … I imagine his mess of wreckage, which rotates for various scenes, is meant to look like some sort of slum when we are at Rigoletto’s home. But Rigoletto is a court employee who must be reasonably well paid: he can afford to retain a nurse-companion for his daughter and he lives next to Count Ceprano. Even if we accept the premise of a slum, which works best for the final scene when we are chez Sparafucile (the assassin), I have seen slums all over the world and that the poor, often being artisans, can be astonishingly skilful with the meanest of materials. On opening night, one or two bits appeared to fall off Vale’s creation.

Maestro Benini secured some excellent playing, after a slightly tentative start by the brass. I should mention the principal cellist whose playing enhanced Keenlyside’s singing in his big scene excoriating the courtiers. The Chorus’s singing was very acceptable.