The Orchestra of the Royal Opera House
Ingo Metzmacher 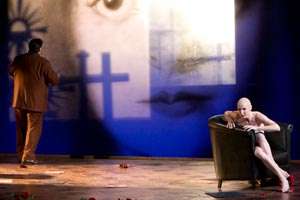 Premiered in 1920 Erich Wolfgang Korngold’s “Die tote Stadt” has taken just short of 90 years to gain its first staging in the UK, and for many years has been one of those operas that die-hard opera fans, particularly those with leanings towards the Germanic repertoire, would have had fairly high on their staging wish-lists. It has only had intermittent concert performances on these shores, but the opera does have two very well known and heady episodes that have frequently found their way into recitals and recordings. In addition the fine complete world premiere recording of 1975 under Erich Leinsdorf with an impressive cast has retained a fairly constant place in the catalogue since.

In staged performances, “Die tote Stadt” has probably fared better in cities such as Vienna and Berlin than elsewhere. This stylish, visually stunning and intense production by Willy Decker, a co-production by Vienna State Opera and Salzburg Festival was first seen at the latter in 2004 and was greeted with some critical acclaim. It has travelled to Amsterdam (conducted by Ingo Metzmacher), Barcelona and San Francisco. It is extremely faithful to the work as conceived by its creators and presents an occasionally searing insight into the emotional and psychological trauma of deep grief. 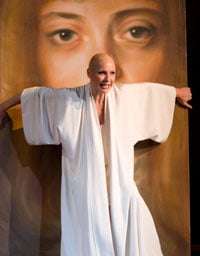 For those unfamiliar with the plot … the middle-aged Paul has lived his life in an emotionally shattered state since the death of his beautiful young wife Marie, and spends much of his time reminiscing on the past in a room in his house where treasured memories of his wife are preserved as if in aspic. As the opera starts his housekeeper Brigitte and friend Frank find him in an unexpectedly excited state, he having seen a young dancer, Marietta, strikingly similar to his wife. Both friend and servant express their misgivings about the dangers of Paul projecting his fantasy of her being Marie re-incarnated. Marietta arrives in the house and after an initially awkward and almost tender conversation she becomes aware of her personal similarity to Marie and she leaves. Paul sinks once more into reverie and has a nightmarish vision in which his lustful thoughts, prudish nature and latent jealousies and violence mix dangerously. He seduces Marietta and casts himself off from Frank, who he believes is also amorously pursuing the dancer, and also Brigitte who leaves his service for a convent-life in disgust at his immorality. He then finds that Marietta is a dangerous adversary determined to eradicate his memory of Marie; he strangles her with his dead wife’s hair. The horrific dream fades as Marietta returns briefly to the house to collect the parasol and flowers she left there, and Paul finally finds the courage to leave the past in its place.

Decker’s production is set in a dark bare room with an elegant white ceiling and dominated by many versions of an image of a young woman. Occasionally an identical room becomes visible through the back wall where one sees the fantasy being lived out. In Act Two reality is confined to the background and fantasy comes to the fore. The nightmares are enacted with much stunning imagery – the houses of Bruges swirling in and out of view, the heightened religious processions dominated by the female characters being pinned to crucifixion crosses, and the over-garish world of the theatre world Marietta inhabits. All is intensely lit and costumed, and the visual feast is perfectly attuned to Korngold’s heady impressionistic score.

Its lush sonorities, owing much to the early operatic output of Richard Strauss and also to Puccini and the Italian verismo style, its pervasive use of various themes and the skilful orchestration and theatricality were given full rein by the ROH Orchestra under Ingo Metzmacher, making an unexpectedly late debut at The Royal Opera. The players seemed to respond well to him and, save for an occasional tendency for the orchestral blast to overwhelm the singers, particularly in the first act, the musical side of events is in sure hands. Korngold’s distinctive use or percussion and piano certainly registered and Metzmacher was thankfully not over-indulgent of the score’s more overtly romantic passages. 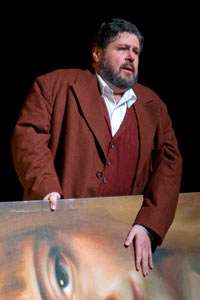 The success of any performance of this work is heavily dependent on whether the tenor can get through it vocally intact. The role is one of those strenuous ones, requiring the vocal heft needed for Straussian roles such as Bacchus, the Kaiser, Menelaus, and Midas, but also requires lyricism as well. He’s also performing for pretty much the entire work. As such it has few takers at any time. Stephen Gould proved himself more than equal to its many challenges, pacing himself well, and unleashing floods of generous bronzed tone whilst still being able to scale down for the more reflective moments. He sang the final moments most affectingly. Dramatically it was a fine if slightly restrained performance – a little more sense of desperation and of rushing headlong and uncontrollably through a living nightmare might have taken it to an even higher level.

In this production the roles of Paul’s friend Frank, and Fritz (an actor in Marietta’s troupe), are doubled. The Fritz role has long been favoured by baritones as it enshrines the famous ‘Pierrot-Lied’. Gerald Finley, as might be expected, certainly lavished all his Lieder skills on that aria. He also managed to make Frank more than just a sympathetic bystander – indeed in Decker’s production there is a sense that it is Frank’s comment about Paul’s tendency to fantasise that triggers off his hallucinatory experience. Similarly Kathleen Wilkinson’s velvety tones made Brigitte a warm-hearted and sensitive woman. She too made more dramatically of a role that could become inert or uninteresting; Brigitte’s response to her embrace of relief by Paul toward the end was one telling moment. The smaller roles of the actors, actresses and dancers were all well sung, although none of these roles give much scope for much individuality of character to emerge. 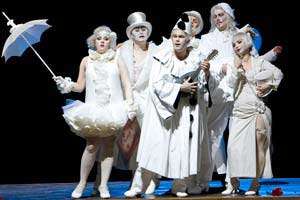 Now, individuality is something that the Marie/Marietta of Nadja Michael certainly has in abundance. She’s a strikingly attractive woman, and looked marvellous in her various costumes. She also is evidently very lithe and, as she showed in her recent Salome for The Royal Opera, has an ability to dance well. She certainly knows how to hold the attention and managed to evince the essential natures of her two roles – or perhaps the opposing facets of the one. Her Marietta of the dream was unpleasantly reptilian, with the ‘reality’ version actually rather elegant and sympathetic. As the re-incarnation of Marie she also managed to enact another milder persona as well. From a dramatic point of view the interpretation is an undoubted tour de force.

Vocally however, things were less happy, and one was left with a feeling of concern that this gifted performer may not have a long career unless some technical issues are quickly addressed. Much of her singing was fierce, almost feral at times and, of course, this does accord with the drama. What was disturbing was that when not singing at full throttle her tuning was woefully approximate. The opening of ‘Glück, das mir verblieb’ was marred by dubious pitching and lack of true fluidity and beauty of tone, made all the more evident by the pin-point accuracy and legato of Stephen Gould’s contribution later in that duet. Her very high notes were not the most-lovely either, often snatched, and in general the various registers of her voice do not seem happily integrated. Toward the lower end of her range the sound is more individual and beautiful, although somewhat covered, but one is left with the uncomfortable impression that her move into the soprano fach may not have been wise. For such an accomplished actress her diction was surprisingly poor, though Korngold’s word-setting may be partially to blame there.

Nevertheless, the importing of this production was a brave undertaking by The Royal Opera, particularly in the current financial climate. However, it should pay off handsomely and the dreams of many opera-goers desirous of seeing a staging of “Die tote Stadt” will have been realised.