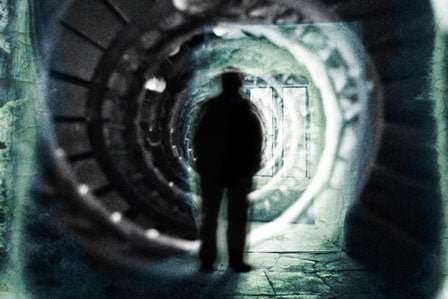 The Royal Opera, Aldeburgh Music and Opera North have combined to nurture, encourage and guide new-and-emerging operatic talent, and this Double Bill is the first in a series of three sets of commissions resulting from this initiative. Both are operatic debuts for their composers and received their premieres a few days ago in Aldeburgh. What these two works have in common is assured, fluent writing, tinged with a hint of self-consciousness, and subject matter (in the loosest sense) infused with the dream-like, nightmarish world of the unreal.The Commission relates the folk-like tale of a man returned from war to exact revenge on his brother’s killer. In order to do this he sets himself up as a craftsman, working with a silversmith to create precious and beautiful works to order. With them lives the Silversmith’s daughter, traumatised by years of conflict and loss, and fascinated by the Craftsman.Set simply with an asymmetric white canvas looming above the instrumental ensemble at the back of the stage and several cluttered work-benches, the action unfolds with a gently moving flow and perfect characterisation, in no small part due to the unforced poetry of the lyrics. This elegance is beautifully matched by the uninhibited lyricism of the music, unencumbered by the superfluous. At times playfully rhythmic, at others poised and gentle, Elspeth Brooke allows brilliantly subtle allusions to bubble just below the surface, invoking, at times, the world of Hollywood, the darkness of the tango, or the mysticism of the East.Andri Björn Róbertsson brought a touching humanity to the Craftsman, with a resonance at once both impassioned yet restrained. His sensitivity made the repeated prayer sections genuinely desperate pleas, and his occasional falsetto was clear and well-controlled. Such clarity was mirrored by Daniel Norman’s Silversmith, efficiently and effectively conveying a deep sense of pain and loss, and William Purefoy’s Pope, who pronounced with a pleasing religious fastidiousness and clerical crispness. Anna Dennis, as the Daughter, brought unrestrained freedom to the very few moments available amid sparse and subdued writing, but gained a beautiful grace towards the more lyrical ending.All of this makes for a glorious operatic experience, but this is sometimes inhibited by slightly confused aesthetics – dark religiosity, the simply rustic and, strangely, gangster films – the multiple layers of production, which while enhancing the event, often distract with their heavy imposition. Dick Straker’s video design gently hints at discomfort and instability, but the amplified gasping and echoing clangs between sections is overly dramatic for such a fragile context. Although this can be seen as playful experimentation, it feels at odds with the very serious content, as well as the final words uttered by the Daughter: “I will speak this language clear.”Café Kafka certainly conjures up the often-nightmarish world of Kafka’s writing, with incidents drawn from his works. This makes for an even more surreal collection, where characters flit from one bizarre situation to another, musing on human nature and society’s dark side. Staged in a modern, slick, brushed-metal bar, with music that fluently captures the ever-changing kaleidoscope of emotion with almost schizophrenic energy, it would probably be easier to find a needle in a haystack than discern a coherent narrative, which could be argued is in keeping with the source material.Joining the previous cast is Suzanne Shakespeare, who brought admirable vocal control and strength to the role of Girl, whilst Róbertsson triumphed as the mythical Gracchus the Hunter, with a commanding stage presence and a sinuous, weighty performance contrasting curiously with his vulnerable, sparse frame. Interspersed among the seemingly disjointed sections are playful but frightening comedic elements and hugely stylised, exaggerated choreography. While reflecting the sometimes terrifying dystopian nature of events, this can feel like a child who repeatedly takes his clothes off in front of his family at Christmas lunch. There is, however, a pleasingly weird ending with the appearance of a disaffected policeman.What stands out in both works is the impressively high quality of the writing, reflected in the inventive staging and assured performances. It promises much for the future opuses resulting from this welcome co-commissioning project.