Skip to content
LnRiLWNvbnRhaW5lcltkYXRhLXRvb2xzZXQtYmxvY2tzLWNvbnRhaW5lcj0iNmIzNDMzNmNmZTc3NWZiNGJlMTVjMmIwMzU3NWM1MjYiXSB7IHBhZGRpbmc6IDI1cHg7Ym94LXNoYWRvdzogNXB4IDVweCAxMHB4IDAgcmdiYSggMCwgMCwgMCwgMC41ICk7Ym9yZGVyOiAycHggZG90dGVkIHJnYmEoIDEwOSwgMTA4LCAxMDgsIDEgKTsgfSAudGItZmllbGRbZGF0YS10b29sc2V0LWJsb2Nrcy1maWVsZD0iODM3Y2ExZjc0MGRjZDdkOTdlMzQzOWMyYjIwMWZmZTMiXSB7IGJhY2tncm91bmQtY29sb3I6IHJnYmEoIDIzOCwgMjM4LCAyMzgsIDEgKTtwYWRkaW5nLXRvcDogMTBweDtwYWRkaW5nLWJvdHRvbTogMTBweDtwYWRkaW5nLWxlZnQ6IDEwcHg7IH0g
LnRiLWNvbnRhaW5lcltkYXRhLXRvb2xzZXQtYmxvY2tzLWNvbnRhaW5lcj0iNmIzNDMzNmNmZTc3NWZiNGJlMTVjMmIwMzU3NWM1MjYiXSB7IHBhZGRpbmc6IDI1cHg7Ym94LXNoYWRvdzogNXB4IDVweCAxMHB4IDAgcmdiYSggMCwgMCwgMCwgMC41ICk7Ym9yZGVyOiAycHggZG90dGVkIHJnYmEoIDEwOSwgMTA4LCAxMDgsIDEgKTsgfSAudGItZmllbGRbZGF0YS10b29sc2V0LWJsb2Nrcy1maWVsZD0iODM3Y2ExZjc0MGRjZDdkOTdlMzQzOWMyYjIwMWZmZTMiXSB7IGJhY2tncm91bmQtY29sb3I6IHJnYmEoIDIzOCwgMjM4LCAyMzgsIDEgKTtwYWRkaW5nLXRvcDogMTBweDtwYWRkaW5nLWJvdHRvbTogMTBweDtwYWRkaW5nLWxlZnQ6IDEwcHg7IH0g
Enescu
Oedipe – Tragédie lyrique in four Acts and six tableaux to a libretto by Edmond Fleg after the plays by Sophocles [UK stage-premiere performances; sung in French with English surtitles]
LnRiLWNvbnRhaW5lcltkYXRhLXRvb2xzZXQtYmxvY2tzLWNvbnRhaW5lcj0iNmIzNDMzNmNmZTc3NWZiNGJlMTVjMmIwMzU3NWM1MjYiXSB7IHBhZGRpbmc6IDI1cHg7Ym94LXNoYWRvdzogNXB4IDVweCAxMHB4IDAgcmdiYSggMCwgMCwgMCwgMC41ICk7Ym9yZGVyOiAycHggZG90dGVkIHJnYmEoIDEwOSwgMTA4LCAxMDgsIDEgKTsgfSAudGItZmllbGRbZGF0YS10b29sc2V0LWJsb2Nrcy1maWVsZD0iODM3Y2ExZjc0MGRjZDdkOTdlMzQzOWMyYjIwMWZmZTMiXSB7IGJhY2tncm91bmQtY29sb3I6IHJnYmEoIDIzOCwgMjM4LCAyMzgsIDEgKTtwYWRkaW5nLXRvcDogMTBweDtwYWRkaW5nLWJvdHRvbTogMTBweDtwYWRkaW5nLWxlZnQ6IDEwcHg7IH0g 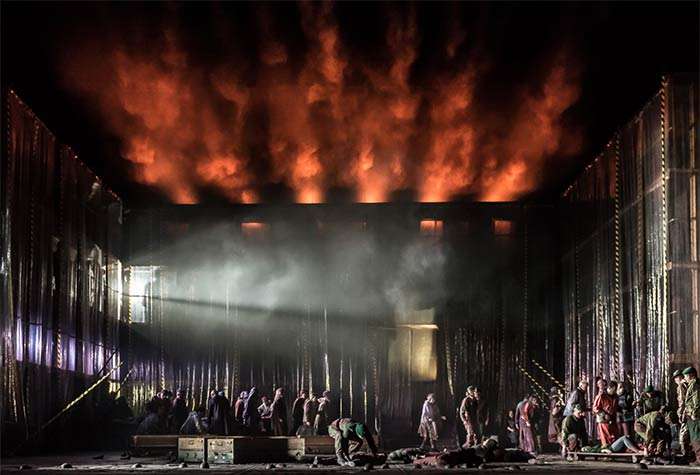 This first-night performance at the Royal Opera House proved a landmark in several respects – not least because it marked the first time that Oedipe, the only opera by George Enescu, had been staged in the UK (indeed, apart from an abridged concert presentation at the Edinburgh Festival fifteen years ago, its first hearing here in any form). This in itself would have made for a notable event, and the fact that the production almost entirely justified its logistical (not least financial!) and artistic outlay duly served to make an undoubted occasion the more significant.

Envisaged prior to the First World War, substantially drafted during the early 1920s and only finished in 1931, Oedipe was warmly received at its Paris premiere five years later – but there were to be no further productions for another two decades and (outside of Bucharest at least) stagings have not been frequent, though it has featured at the major opera houses of Vienna and Berlin. 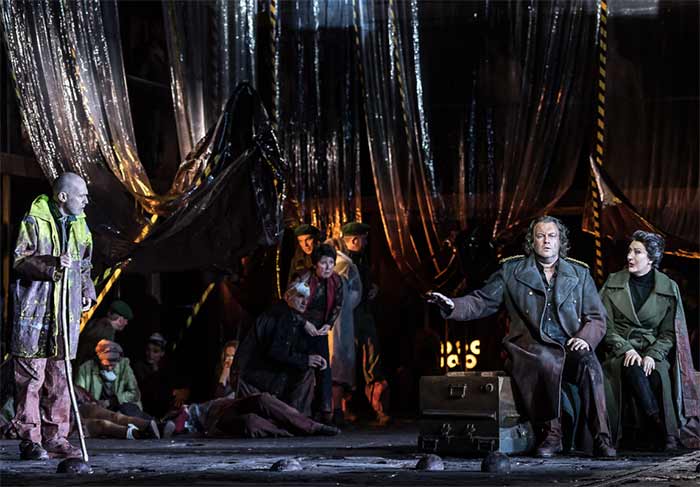 The present production was first seen at La Monnaie in Brussels in 2011 and, for all its free-form approach to time and place that risks making the whole feel less than the sum of its parts, nonetheless succeeds in conveying the essence of an opera that is inclusive in every aspect – not least when taking in the whole life of its main protagonist from birth, through adolescence and manhood, to death in what is a veritable triumph of dramatic unity.

In order to do this, directors Àlex Ollé and Valentina Carrasco have chosen to stage each of the four Acts in a different setting and environment – expanding the several decades covered by Sophocles’s plays across centuries and even millennia. Such a procedure is given credence by the libretto, in which Edmond Fleg (most likely at the prompting of Enescu) seemed intent on transferring Oedipus from his specific era so as to make him an Everyman figure in terms of striving and fulfilment – thereby bridging the divide between the mythical and the human.

The first Act presents his birth and rejection by his parents as a vast frieze with the Corinthian court as though an assemblage of terracotta warriors on which the machinations of the Gods serve to fragment and disperse. The second Act finds Oedipus escaping from the would-be psychoanalysis of Méropeinto the unyielding urban present, fatefully provoked into action by a thuggish Laïos and his cohorts – a risky procedure but vindicated by Peter van Praet’s lurid lighting – before he emerges victorious over the aeronautical Sphinx to be greeted as a saviour by the Thebans. The third Act evokes a Thebes rapidly succumbing to plague – here graphically represented by primal mud which leaves nothing and no-one unaffected – with the protestations and humiliation of Oedipus afforded a Classical restraint the more arresting in context. The final Act tacitly evokes the first as the fallen hero reaches his destination in an idealised Grecian environ – eloquently conveyed by Alfons Flores’s sets and Lluc Castells’s fanciful yet appealing costumes – such as opens-out onto the ‘white light’ of transfiguration. 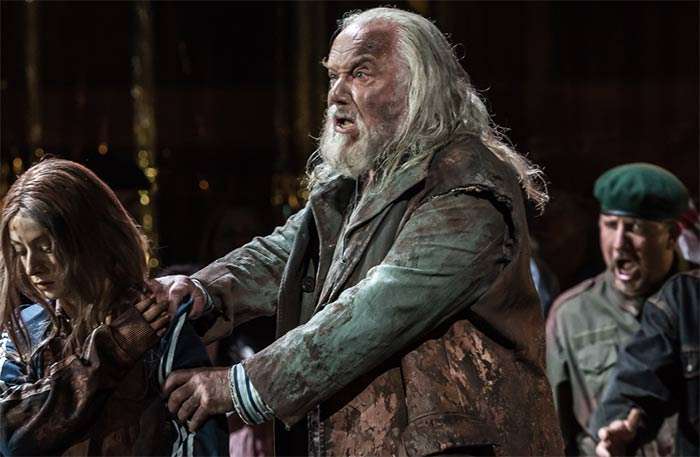 Musically the work finds Enescu at his most imaginative and wide-ranging. A composer who transforms his influences rather than rejecting them, his score is demonstrably in a lineage of French opera with Debussy’s Pelléas et Mélisande, Dukas’s Ariane et Barbe-bleu and Fauré’s Pénélope as its direct forebears; the vocal and harmonic elements derived from these sources complemented by an orchestral sensibility as different from any of these as it is more diverse in timbre and texture. Aware of the manifold possibilities of his era while being wary of their exclusiveness, Enescu was not afraid to draw on the full range of stylistic resources in a piece whose tonal grounding remains strong for all its subtlety and obliqueness: rarely can Yehudi Menuhin’s conviction of Enescu as a figure for the twenty-first century have felt so apposite.

It helped that the cast could hardly have been stronger. As Oedipe, Johan Reuter encompassed the extent of the main protagonist’s experience as he tries in vain to escape the fate ordained for him even before birth; in the process rendering this role’s outsize technical demands with exemplary conviction. As Tirésias, John Tomlinson found an ideal accommodation between the wrathfulness of an unwilling prophet and the pathos of a helpless onlooker, while Sarah Connolly underlined the humanity of Jocasta’s relatively brief role with singing of nobility and warmth. 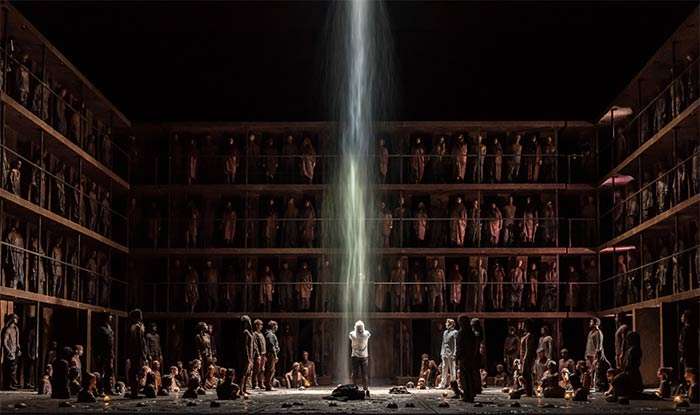 Samuel Youn brought an edgy vengefulness to Créon without ever descending to the level of archetypal villain. Hubert Francis was a callous Laïos, with Claudia Huckle a wanly sympathetic Mérope, and Sophie Bevan an Antigone as pure in voice as in spirit. The smaller roles of the Shepherd, Theban Woman, Phorbas, the Watchman and Thésée were all ably taken, while Marie-Nicole Lemieux briefly stole the show with her cameo as the Sphinx – a hybrid of creature and machine that was chilling but never two-dimensional in its effect.

Few twentieth-century operas have so extensive and diverse a role for the chorus as Oedipe, and here the Royal Opera Chorus was consistently at or near its very best in writing whose all-round requirements can rarely, if ever, have been so comprehensively met; thanks, in no small part, to the direction of Genevieve Ellis. The ROH Orchestra was no-less impressive, with Leo Hussain (who presided over that La Monnaie production as well as a convincing concert performance of Wozzeck at last year’s Enescu Festival) steering the lavish and diversely arrayed forces with an unfailing focus and insight. One among a bare handful of artists who knows this score from the inside, Hussain is already an opera conductor of wide experience and one looks forward to more ROH appearances after such an auspicious debut.

Its place in the operatic repertoire may still be some way off, but Oedipe can now be said to have overcome the ‘cult classic’ status that has stayed with it these past eight decades. In so enabling its wider acceptance, the Royal Opera’s production will have played a decisive role.