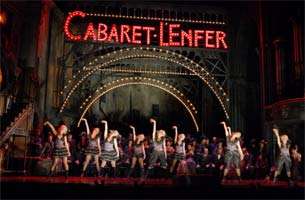 This is the third revival of David McVicar’s theatrically stimulating and intense production of Gounod’s Faust, which has already seen some considerable interpretations in the major roles since its first outing in 2004. With Charles Edwards’s atmospheric settings incorporating cathedral columns and organ loft, clever use of gauzes, scrims and some stage-work reminiscent of the period of the work’s premiere in 1863, to which date the action has ostensibly been updated, the presentation is always stimulating and occasionally provocative. As so often with McVicar there are moments where sometimes the action is distractingly over-busied – but he tells the story with flair. Rarely does one feel that music and action is being tailored to suit directorial fad. Great to have the ‘Nuit de Walpurgis’ sequence – here staged as a nightmare ballet set in some diabolical theatre and presided over by Méphistophélès as a Hecate figure. The only distraction here was the constant vocal cackling of the sword-wielding and vengeful ballerinas as they taunt a Marguerite-figure and re-slay Valentin – where director and choreographer indicate that dance music does not match the infernal scene they envisaged. However, the counterpoint of the two is still effective owing to the conviction of the performers. 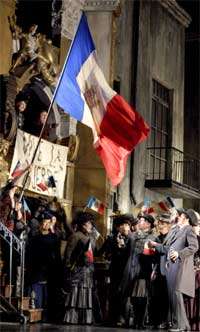 In the pit there was orchestral playing of the highest order. Faust has an undeniable richness of memorable arias, ensembles and choruses, and Gounod’s elegant and colourful orchestration gives many opportunities to orchestral soloists. There were fabulous contributions from clarinet, oboe, horn and violin – each perfectly conveying mood and emotional weight. There were some telling bassoon contributions in ‘Méphistophélès’s Serenade’ too. Evelino Pidò’s conducting kept-up the momentum afforded by the staging. Only occasionally did a sense of haste intrude, notably at the start of Marguerite’s ‘Jewel Song’, and he managed to avoid sentimentality and bathos. Vocally there was much to admire. The Chorus was on fine fettle, relishing the big tunes in the Kermesse scene, the lusty ‘Soldier’s Chorus’, and the magically hushed response to Valentin’s death. 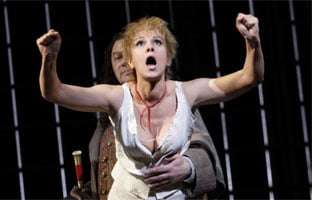 Of the principal singers, Angela Gheorghiu returned as Marguerite, a role for which she has the technical ability to dazzle and allure. Her Marguerite makes the character more forthright and less sympathetic than some others. Her vocal mastery sometimes gets the better of her – an inappropriate vocal playfulness undermined the final moments of the Church Scene when she indulged in some unstylish vocal swooping. Likewise she lacked the power and abandon needed for the final Trio, where the tussle between good and evil seemed theatrically settled before it started. Nonetheless, and despite an uneasy start, she remains impressive in the role.

René Pape had enormous fun as the charismatic devil figure; vocally he was as rich and sonorous as one could hope for. In both dramatic and vocal terms he caught the cynical, nonchalant and malevolent aspects in equal measure, and managed to be humorous and slightly scary at the same time. Dmitri Hvorostovsky certainly has the sense of line and the easy upper register that the role of Valentin requires, but was not in his sappiest voice. He certainly demonstrated that although Valentin has a loyal side it comes allied to cruelty as well. Michèle Losier was a vocally appealing if somewhat anonymous Siébel, whilst Carole Wilson made much of Marthe’s brief involvement in the plot. 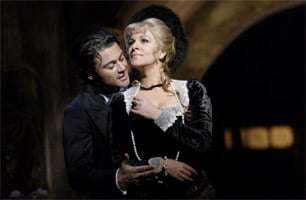 Since his sensational debut in the recent production of Massenet’s Manon at Royal Opera, Vittorio Grigolo has made a splash worldwide. He was wonderfully lyrical and impetuous as the youthful Faust. He kept the audience and Marguerite spellbound in “Salut! demeure chaste et pure…” with some ravishing soft singing and keeping his natural Italianate sound in check. His stylish contributions to the ensembles were always evident. Crucially he managed to differentiate the moments when Faust is acting under Méphistophélès’s spell and when not; the moments where Faust shows his genuine feelings for Marguerite were touchingly done. He was less convincing dramatically as the world-weary suicidal scholar of the opening scene, but that transformation is hard to pull off.This strong revival partners the excellent new production of Puccini’s Il trittico – and with them the ROH season has got off to a cracking start.