Offenbach
Les Contes d’Hoffmann – Opera in three Acts with Prologue and Epilogue to a libretto by Jules Barbier & Michael Carré after E. T. A. Hoffmann [Schirmer edition; sung in French, with English surtitles] 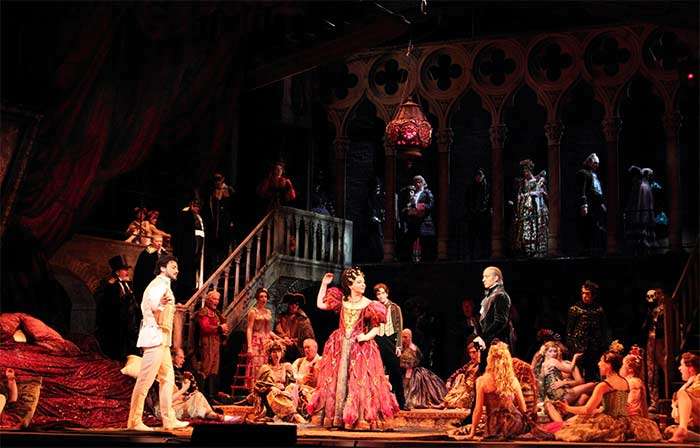 When, in 1880, Offenbach left unfinished his masterpiece The Tales of Hoffmann, he unwittingly provoked a legacy of scholarly debate. Much of the ensuing performance debacle is the result of textural changes in the wake of new material and arguments over the order of the Acts, the use of a single voice for Hoffmann’s trio of lovers (as envisaged by Offenbach) and recitative versus spoken dialogue.

This revival of John Schlesinger’s 1980 production gives preference to tradition over authenticity. As in previous revivals we enjoyed three sopranos for the price of one, the more-usual reversal of the Antonia and Giulietta Acts (ignoring Offenbach’s conception) and sung recitative. 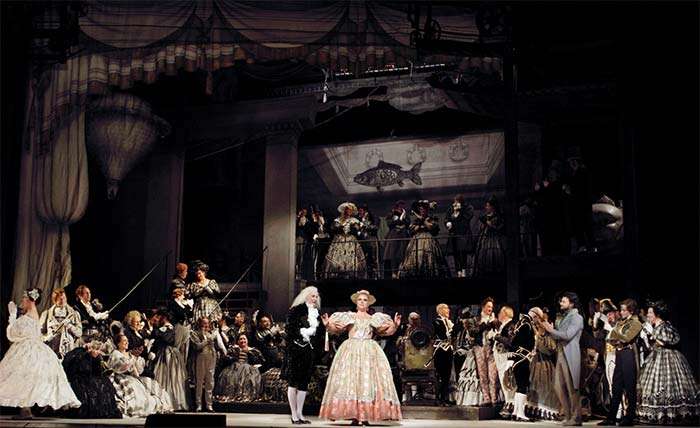 The sets are now tired-looking, particularly the drab workshop for Olympia and plain drawing-room for Antonia. Had we all been furnished with a pair of magic spectacles (given by Coppélius to Hoffmann in Act One), David Hersey’s sets might have appeared less sepia-tinted. Luther’s three-level tavern could have had a facelift too, and only Giulietta’s sumptuous Venetian boudoir (with canal accessory) has any sense of spectacle about it, although despite some provocatively-clad women, there is little sensuality. Maria Björnson’s costumes are lavish if conventional and only narrowly prevent Hoffmann’s four adversaries looking like pantomime villains, while the evil Dr Miracle, in a long leather coat, might pass for Goebbels.

In the title role Vittorio Grigòlo was a ringing if not always resounding tenor; a brightly-lit timbre (and impressive stamina) never quite compensating for some cod acting, save for his portrayal as a wastrel. By Act Two, however, he was knocking out fabulous high notes, and ‘Oh dieu, de quelle ivresse’ drew heart-warming tones. Thomas Hampson managed to sneer convincingly as the unscrupulous Lindorf and inject sinister intent as Dr Miracle. Where his low notes failed to register, these could be heard to sonorous effect in the rich timbre of Eric Halfvarson as Crespel, Antonia’s grief-stricken father. 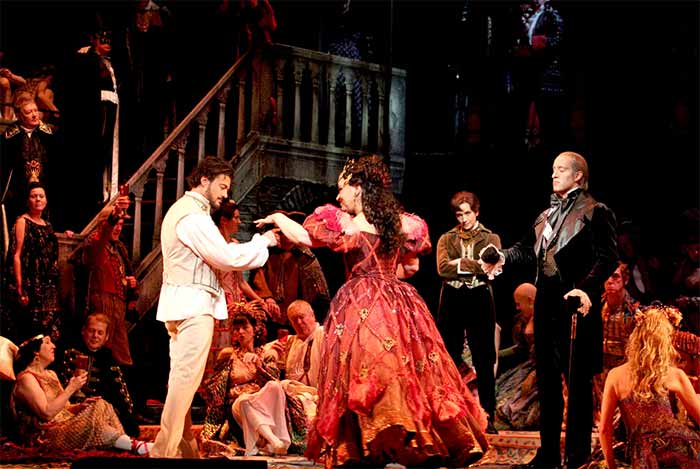 Sofia Fomina as Olympia was a persuasive mechanical doll, yet despite her poise in ‘Les oiseaux dans la chamille’ her cut-glass voice verged on the shrill. Christine Rice as the courtesan Giulietta could claim warmer sounds, while Sonya Yoncheva as the (consumptive?) Antonia took the laurels for radiance of voice and compelling presence, but Act Three lacked dramatic sweep. As Hoffmann’s loyal companion Nicklausse, Kate Lindsey has a pleasingly flexible voice; sensitive in the ‘Barcarolle’ duet that opens Act Two and assured in her ‘violin’ aria of Act Three, where later, in some fine trills, she provided some timely humour with her mimicking of Olympia.

Despite audible clumping behind the curtain for the scene-change after Antonia’s death, the orchestral reprise of the ‘Barcarolle’ was beautifully shaped. Elsewhere, under Evelino Pidò, the playing was solid, if not zesty. If he can create some greater fizz, this revival may well go out with a bang and not with a whimper. The Tales of Hoffmann deserves more than this, for Offenbach’s tunes are smash hits.