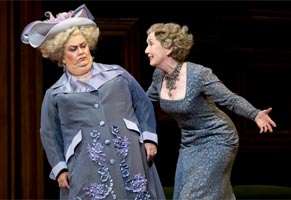 This first revival of Laurent Pelly’s engaging production of Donizetti’s comedy, “La Fille du régiment, revived by Elaine Kidd, with Chantal Thomas’s fresh and attractive designs comes up sparkling as it did on its first showing. It provides perfect fare for those who want a lightly humourous evening with a bit of sentiment thrown in. It is true that Donizetti’s customary inventiveness does seem to tail off a little towards the end of the opera, but elsewhere there is much that is infectiously tuneful.

With their stylish singing and winning acting, the two leads demonstrate that there is more to “La Fille du régiment” than a romp. Central to the performance is Natalie Dessay’s charming Marie – a diminutive urchin of a tomboy with her emotions all at sea because she is experiencing love for the first time. Her portrayal has dramatic depth and necessary wit. Dessay certainly uses all the embellishments of her lines to great comic effect in the way that the best coloratura comediennes can. However, she is also aware that the singers of these roles must not only thrill the audience through virtuosity but also engage its sympathy – and this she does with consummate ease. The plangent F minor/major strains of ‘Il faut partir’, perfectly phrased and shaded, had an emotional core that was far more moving than any Donizetti mad-scene, and her solo Act Two scena likewise. Dessay’s voice is not huge but it carries well throughout its extensive range, and coped well with the demands of being required to sing when being held aloft and sideways by the gents of the chorus. She remained the pivotal character whenever on the stage. 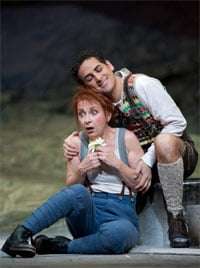 Partnering her is Juan Diego Flórez’s innocently gauche Tonio. Generally he’s not in Dessay’s league as an actor, but in this role his genial portrayal is perfect. As one would expect his singing is effortlessly stylish and accomplished. Inevitably the impressively pinging nine top Cs of ‘Ah! mes amis…”, sung with an ease bordering on nonchalance, brought the house down. Far, far more remarkable was his soft honeyed singing and glorious legato of the second act. ‘Pour me rapprocher de Marie’ was listened to in rapt silence by the first-night audience; the second couplet especially. (Colin Lee sings Tonio on 27 May and 1 & 3 June.)

In the smaller roles there is Alessandro Corbelli as Sulpice, making his trademark vocalism and comic timing tell at every turn. It was also good to see Ann Murray as an unusually sympathetic and elegant Marquise de Berkenfield, thankfully not overdoing the singing-lesson scene. The men of the chorus were lively in their contribution and slick in their choreography too. The balletic-maids routine at the start of the second act remains very funny – even when you know what is coming.

In the pit there were felicities aplenty – although the lack of precision in the early passages of the overture did not start the evening off well. It took the arrival of the trumpets for things to take off and from then Bruno Campanella kept the performance fizzing along nicely, and yet elicited some wonderful playing in the accompaniments to the more emotionally-laden moments.

“La Fille du régiment” is not Donizetti’s most consistently inspired comedy, but with these performers one can easily think otherwise. Sheer fun!