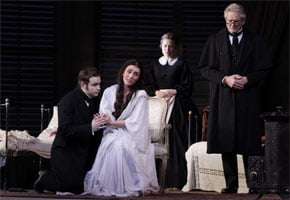 This, the opening night of the third run of performances of La traviata in the current Royal Opera season, developed over the course of the evening into a powerful dramatic representation of this ever-popular work. Richard Eyre’s 1994 production in Bob Crowley’s evocative designs, here revived by Paul Higgins, wears its years well. If some aspects, such as the silhouetted dancers on the Paris streets in the final Act and the dance-episodes of the second Scene of Act Two, now grate, the production remains an eminent showcase for many varied and interesting interpretations.

At the helm of the Orchestra this time is the experienced Maurizio Benini, always considerate of the singers and yet eliciting fabulous playing in a reading both thoughtful and insightful … from the off with a ‘Prelude to Act One’ that immediately brought out the sense of Violetta’s isolation. Elsewhere pacing was exemplary – particularly in Alfredo’s ‘De’ miei bollenti spiriti’ at the start of the second Act and also in the tempos of Giorgio Germont’s two arias of that act. The orchestral drama that underpins much of the Violetta-Giorgio duet was tellingly played and contributed much to the increasing tension. Thankfully the Gypsies and Matadors episodes at Flora Bervoix’s party sped by too!

In the title role is Albanian soprano Ermonela Jaho, last seen and heard in the house as a stunning Suor Angelica. She has sung Violetta in this production before, but her dramatic and vocal acting has grown in confidence since her Puccini success. In the opening Act her slightly covered tone carried portents of the tragedy to come, and she charted the courtesan’s predicament brilliantly. She has a way of inflecting the text with meaning and originality, and that her solid technique enables her to flick up to pianissimo high notes stood her in good stead. The highlight was an intense ‘Addio, del passato bei sogni ridenti’; painful to watch. With her strong features she also looks the part, and her physical performance has many insights – she somehow appears to diminish in physical stature as her illness takes hold. 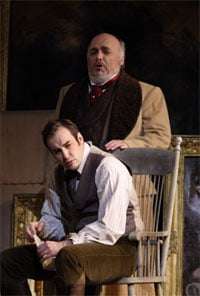 As her lover Alfredo, Stephen Costello got off to a slightly nervy start both vocally and dramatically but improved. It must be hard to make Alfredo interesting until he starts to show his emotional immaturity and volatility in the latter parts of the middle Act, but once he had the chance to show anger and bravado Costello’s performance then caught some fire. He has a solid and appealing open sound to his tenor and with time he should become a fine interpreter of the part.

Paolo Gavanelli also returned to the production as Giorgio Germont, and portrayed the older man as a more sympathetic character than is sometimes the case. This Germont capitulated to Violetta’s charm and poise very early on in their encounter. Vocally he was in penetrating form – his voice carrying impressively into the auditorium – but his sparing use of vibrato can sometimes make his intonation seem insecure and his voice sometimes stands out too obviously in ensemble.

As has been the case in many previous revivals of the production the large cast of secondary characters were cast from strength. Their tensions and emotional interplay, and with Violetta and Alfredo, are crucial to add the flesh to the drama. It was great to see and hear the apparently ageless Robert Lloyd as a very sympathetic and kindly Dr Grenvil. David Stout bristled as a proud Baron Douphol whilst Hanna Hipp’s Annina is evidently supremely loyal to her mistress and distrustful of the Germonts. Justina Gringyte and Jeremy White sparred nicely as Flora and the Marquis d’Obigny. Only Ji Hyun Kim’s Gaston seemed a cipher. The Chorus was on cracking form, its members still bringing spontaneity to a production they must be able to walk through in their sleep! Jaho’s final Act remains the highlight, however – we should see more of her in the house.