Offenbach
Les Contes d’Hoffmann – Opera in three acts with Prologue and Epilogue to a libretto by Jules Barbier & Michael Carré after E. T. A. Hoffmann 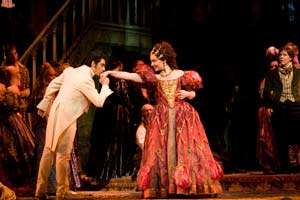 Now being mounted in its seventh revival since its 1980 premiere, the late John Schlesinger’s production of “Les Contes d’Hoffmann” still comes up surprisingly freshly. It has always been one of Royal Opera’s good productions and one which has housed some memorable interpretations of both the title role (Domingo, Shicoff, Kraus, Alvarez and Villazón to name but a few) and of the various villains, ladies and character parts. The atmospheric William Dudley set and stage designs have largely stood the test of time with only the Venice act now looking somewhat dated, and even the use of gauzes and lighting shifts to present characters losing their shadows or coming to life and walking out of pictures still work well. Maria Björnson’s costumes look remarkably well and it may have been brighter lighting but some of them look to have been remade, the exception being Giulietta’s feathered red number which looked less good than previously.

At the centre of this revival is Rolando Villazón’s marvellous Hoffmann. He has the complete measure of the part from a theatrical viewpoint. He’s credibly dissolute in the Prologue and Epilogue, and charts Hoffmann’s journey from the love-struck young man encountered in the Olympia act, through his gradual disillusion in Venice, ending up at a more genuine and tender relationship with Antonia. There’s a huge amount of wit in his physical performance – I loved his collapse after his waltz with the out-of-control Olympia – but there were many other moments where he had the audience chuckling away. 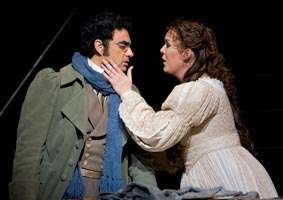 Vocally this is a role he completely inhabits too – it’s exactly the sort of part he should be singing rather than embarking on the more dramatic and heroic corners of the staple tenor repertoire. The voice was ringing out high and true, and with delicacy and nuance. He manages the alternation of exuberance and introspection incredibly well.

He was ably partnered and abetted in his journey by the lovely and wittily knowing Nicklausse of Kristine Jepson. The compass of that role holds no terrors for her and her witty mimicking of the singing of Hoffmann’s lady lovers – elaborate trills for Olympia, voluptuous tones for Giulietta – was spot on. She perhaps made less of the transformation from companion to poetical muse at the end as others have done – but it was a performance to treasure. Good to report that her aria in the Antonia act, so often cut, is included.

From a purely vocal point of view Christine Rice’s Giulietta was the best of Hoffmann’s three lady-loves. She has the richness of voice for the lower passages of the role, such as in the ‘Barcarolle’, and absolute security on-high for the big moments. She also knows how to make something of little in the part dramatically – not an easy feat as Giulietta is not the most interesting of heroines. 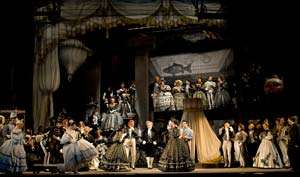 Ekaterina Lekhina’s Olympia was an engagingly funny mechanical doll; wonderfully agile in her incessant and ever-more outrageous trilling even if her tone was on the slightly tinny and brittle side. She managed to avoid the pitfall of her ‘loss of power’ moments becoming a joke that wore too thin. She and Villazón danced together very well indeed.

Katie Van Kooten did not sound absolutely on her best form as Antonia. She has excellent technique and lovely voice, but the big moments such as the culmination of the trio with Dr Miracle and the spirit of her mother, sung with lovely fruity tone by Gaynor Keeble, lacked power. The moment where she sings out for the final time – as the proscenium arch of the opera house gradually lights up – did not quite have the abandon it ideally requires. I am sure she will grow into the part in later performances. 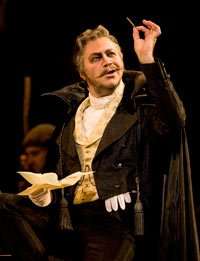 Gidon Saks certainly had malevolent theatrical presence in abundance in his various incarnations and he really knows how to hold the attention. His full-bodied singing was better and more focussed as the extrovert Coppélius and just plain evil Dr Miracle rather than the more insinuating Dappertutto and Lindorf. Indeed, the higher reaches of ‘Scintille, Diamant’ did not sound entirely comfortable. A little more light and shade would have made his singing match the acting more.

In the smaller roles the immediately identifiable tones of Graham Clark shone out in the four servant roles; he too knows how to avoid a sense of routine. He managed to get more laughs as Frantz than many of his predecessors. In the other character-roles the solid and warm tones of Matthew Rose as Crespel and the characterful singing of Robin Leggate’s Spalanzani stood out. Hermann and Nathaniel were slightly overplayed in the tavern scenes, which was a shame.

As ever, Antonio Pappano was a very singer-sensitive conductor and only rarely did he seem to be rushing the cast. It seemed that the chorus was not absolutely attuned to his tempos in the early passages. He managed to balance the lighter comedic Offenbach with the more seriously operatic composer well. The musical in-jokes (such as the snatches of “Don Giovanni” and the discussion of singing as a musical disease in the Antonia act) were somehow sign-posted more than normal – although surtitles do help sometimes.

The string-playing was absolutely first-rate with some evocative and shimmering playing counter-pointed with some prickly pizzicatos. Woodwinds were on good form too. What a tuneful score this is!

This opening-night performance was dedicated to Richard Hickox (who died on 23 November), who conducted the previous revival, in 2004. This enjoyable performance proved a worthy tribute.