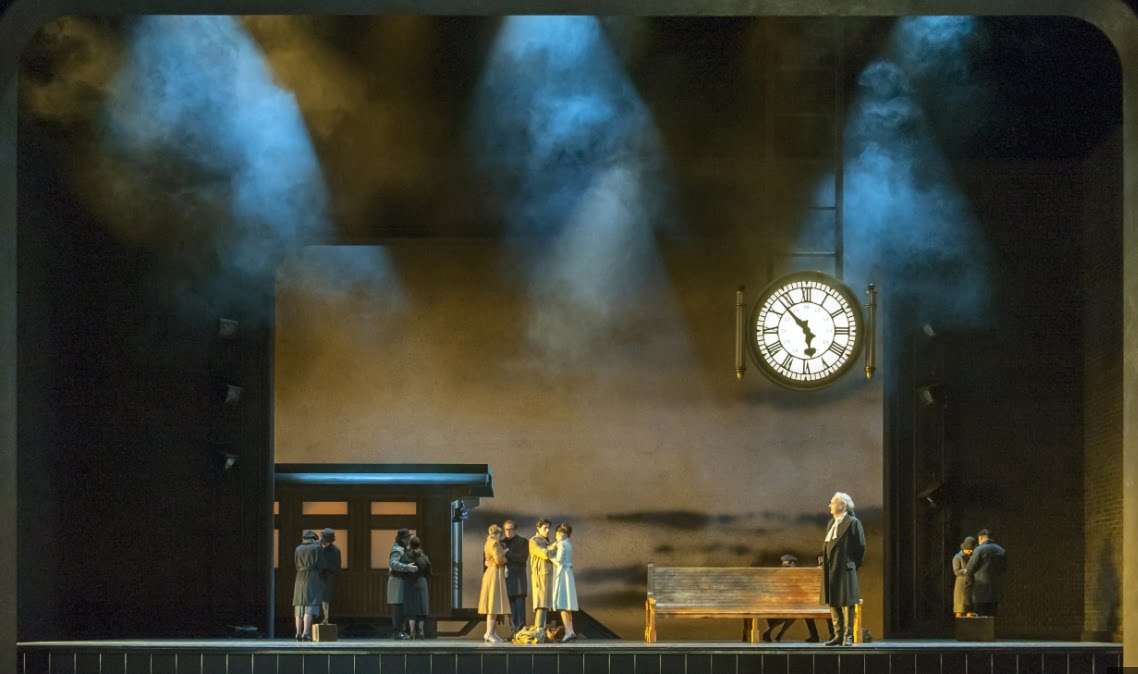 If, in T. S. Eliot’s words, mankind cannot bear very much reality, it is unsurprising that Lorenzo Da Ponte’s uncompromising scrutiny of human passions, allied to the beguiling insinuation of Mozart’s music in Così fan tutte has caused it to be their operatic collaboration least favourably received by the public. The greater prevalence of performances in recent decades might suggest that the tide has now turned and that audiences are less jaded by sentimental or romantic illusions about amorous relations between the sexes so as to dismiss or feel unsettled by the work.

But when a production such as this new creation by Jan Philipp Gloger needs to ask explicitly “What is love?” – spelt out by Despina on a board – it gives pause to consider what progress has really been made in the opera’s reception. In general, one wonders about the director’s confidence in either his own interpretation of the drama or the ability of the original to speak for itself.

In this particular instance, that question in Gloger’s production issues not so much in a coherent concept or line of logical thought but in a somewhat clunky series of tableaux designed to point up the interface between comedy and tragedy, theatricality and realism, sincerity and dissembling. For example, the metaphor of the tree of knowledge of good and evil, with apples and a serpent coiled around its trunk in the scene where the Albanians take poison and the ladies first succumb to temptation in empathising with them, is too obvious and contrived to offer any great insight into the characters’ psychological and emotional states. 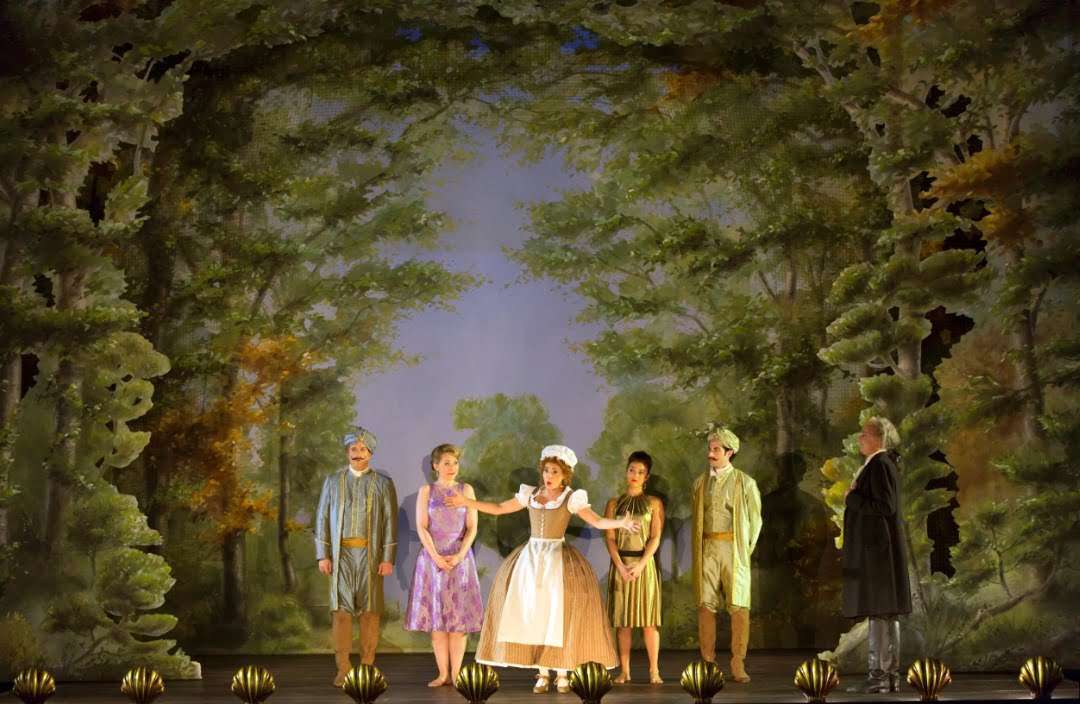 The use of a series of different theatrical settings (not time-specific but 20th-century for the most part) rather deflects, therefore, the seriousness and directness of the message Mozart and Da Ponte seek to convey through comedy and which they rendered so successfully through the device of Don Alfonso’s experiments, and the disguises of Despina and the two men on the one hand, balanced by the sublime beauty of Mozart’s music on the other. In other words, art does not conceal art here but positively exposes it, and Gloger and Katharina John’s deliberate, overt dramaturgy tends to defeat its own point as a result, where Da Ponte and Mozart have already so subtly and skilfully entwined artifice and truth.

The one concession to the ambiguous nuance of their argument is the realisation of Gloger’s point that “there are very different kinds of relationship, of bonds, of love and of attraction between two human beings” through the love-in among all six characters at the end of Act One, and the pairing off at the opera’s conclusion of each lover with the other partner than the one to whom they were betrothed at its beginning.

A constant through the production, which is successful and telling, is that Don Alfonso remains clad in 18th-century dress. As the initiator of the trials to which the other characters are subjected, and given the shifting scenes of the set, this ploy seems less artificial and more a natural focal point, so that he figures as a philosophical concept carrying the truth of the work’s theme across the different periods of time referenced, and also retains a somewhat detached, even shadowy, presence, rather like Vicentio in a similar context in Measure for Measure. 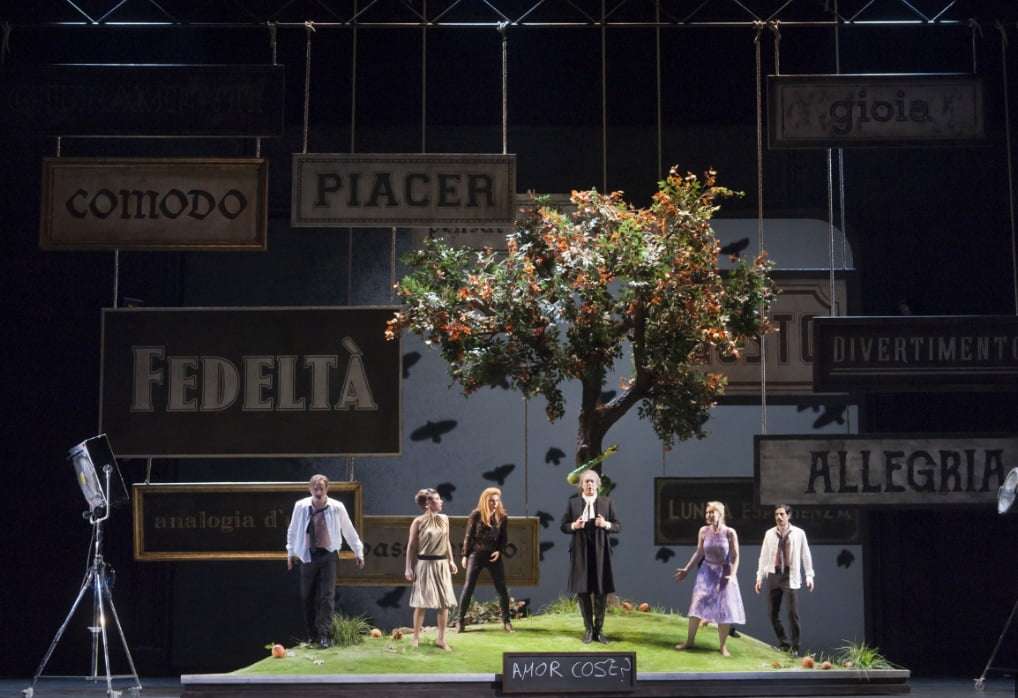 For all the theatricality in which this staging revels, it is surprising that Semyon Bychkov’s conducting is notably understated and often slow. He is certainly an idiomatic Mozartean, bringing clarity and poise to the score, as well as consistently well-shaped phrasing. But it is at odds with the action, which surely demands something more-urgent and propulsive. That tended to carry over to the singers who were movingly intimate and intense when required, as in Daniel Behle’s controlled and steady singing as Ferrando (especially the aria ‘Un aura amorosa’), and a not self-indulgent account of ‘Soave sia il vento’. If the soloists sounded a touch reserved in Act One, they flourished more in the Second.

As Fiordiligi, Corinne Winters did not strike a note of fearsome resolve in ‘Come scoglio’ and her ‘Per pietà’ lacked the tension and ravishing quality required as she grapples with the claims of temptation and fidelity. Alessio Arduini was able to project himself more readily and suavely (particularly in his duet with Dorabella) having sung at the Royal Opera House before, where the others have not, except for Sabina Puértolas. She lacked some sparkle and charisma as Despina even if, in no sense, was she musically insecure.

Angela Brower’s Dorabella was demure initially but developed into the capricious persona capable of falling for the strangers’ charms, and expressing herself eloquently in the Despina-like frivolity of ‘È amor un ladron cello’. Johannes Martin Kränzle sang Don Alfonso with a cool, unflappable restraint, appropriate to this conception of him, but acted with an engaging wit.

This is a tentative attempt if not with stimulating aspects to explore the uncomfortable theme of the inconstancy of the human heart. But the production’s skirting cautiously and ironically around the notion of polyamory comes off as a failure of nerve to grasp fully its implications in this daring opera, and it seems that, for now, it must remain as the love that dare not quite speak its name.