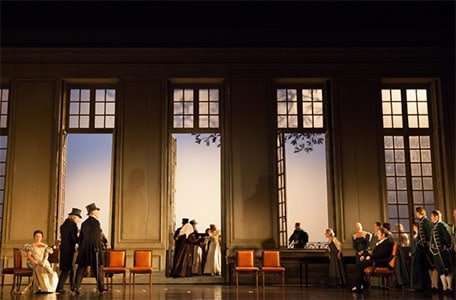 David McVicar’s production of Le nozze di Figaro was first seen in 2006 and now returns to Covent Garden for its sixth revival having previously been mounted as recently as last year though with a different cast. Graham Rogers reviewed that outing for Classical Source and suggested that, in some ways, Mozart and Da Ponte’s collaboration remains a perennially sunny work whenever it is put on, which is true. But as we now head into summer, the watery sun of an autumnal day streaming into Count Almaviva’s castle from the beginning of this presentation evokes a world or period ripe for decline.

By setting the opera in 1830 McVicar suggests that the social order exemplified will soon be further undermined by the impending revolutions of that year, continuing the work of 1789. The hard graft and servitude of the Count’s staff – scrubbing floors and setting about menial chores during the Overture – show what is at stake; and the fact that the cleaning maid is the last person to be seen at the end before the curtain (again on her knees) perhaps implies that somebody still has to undertake such labour, whatever the changes in political structures. 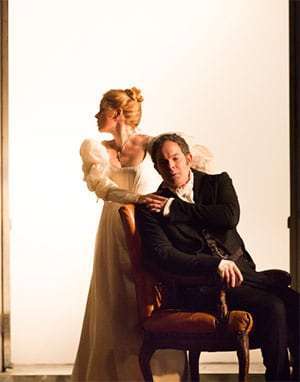 Alex Esposito’s Figaro channelled a considerable amount of the impatience and frustration of classes no longer content to serve their feudal masters. This came across with Esposito’s greater vocal weight than one would expect of a merely roguish Figaro, even at first tending to bark somewhat, though he settled down. A number of the cast sang with a similar dramatic power which seemed a little incommensurate with the authentic manner of the Royal Opera’s Orchestra’s performance under David Syrus (standing in place of Sir John Eliot Gardiner, who conducted last year and was unable to return due to scheduling difficulties).

The brass played with a certain rawness of tone (although modern instruments appeared to be used) but this did not obtrude into the orchestration with too much of a crude sonority. Overall the players’ contribution was lucid, which proved especially effective in ‘Che soave zefiretto’ and those sections in Act Four evoking the nocturnal magic of the castle gardens. Curiously Syrus often took a notably less agile, more relaxed approach in various ensembles and so failed to instil the requisite urgency in those more dynamic and symphonic sections of Mozart’s score which are essential to creating proper dramatic momentum in a work where hardly a musical gesture is superfluous or wasted.

In contrast to Figaro, Camilla Tilling as Susanna possessed a voice which, however charming, was somewhat slight, perhaps to the point of seeming too demure – after all, it is Susanna who opens her betrothed’s eyes to the Count’s amorous designs, and she is fully as capable of leading the him and the Countess along with her ruses as Figaro is.

Gerald Finley originally created the role of the Count in this production, thus investing the part with assurance and authority, underlined by a characteristically engaging musical interpretation. He was more than a sleazy, pathetic lecher, perhaps aware that his political status is ultimately untenable. There was also more than a hint of violence in this interpretation: the Count not only slaps the Countess in Act Two, but he first appears in the latter’s bedroom straight from hunting with a shotgun and shows himself apparently ready to shoot whoever it is he thinks has been attempting to seduce the Countess in the gardens in Act Four. But Finley’s plea for forgiveness at the end was sincere and was consistent with this production’s comparatively serious stance on the drama’s moral and political considerations which does not needlessly play up the jokes and japes.

Rebecca Evans sounded mature in voice as the Countess, certainly wearied and self-pitying in her two great arias. The vocal richness of her vibrato, however fine in itself, was in stylistic discord with the orchestra, another unresolved difference between stage and pit, it seems. Anna Bonitatibus expressed both the tender and lustful sides of Cherubino’s burgeoning amorous nature, though without a clear sense of musical line in his two prominent arias. Dramatically Bonitatibus (in this ‘trouser’ role) captured a sense of Cherubino’s boyish capriciousness, with a deliberate vocal wobble to convey his nervousness before the Countess, but she could probably have achieved this with less musical compromise. Christophoros Stamboglis’s characterisation of Bartolo seemed somewhat anonymous and an instructive comparison could be made between his rather unthreatening ‘La vendetta’ and Finley’s ‘Vedrò, mentr’io sospiro’ where they both vow revenge upon Figaro.

The remainder of the cast provided excellent support, making this again a very estimable production. Musically there may be discrepancies, but it remains a dramatically cogent version with insights and suggestions for audiences to continue to ponder.