Shostakovich
The Nose, Op.15 – Opera in three Acts and ten scenes to a libretto by the composer with Evgeny Zamyatin, Georgy Ionin & Alexander Preis, after the short story by Nikolai Gogol [sung in David Pountney’s English translation, with English surtitles] 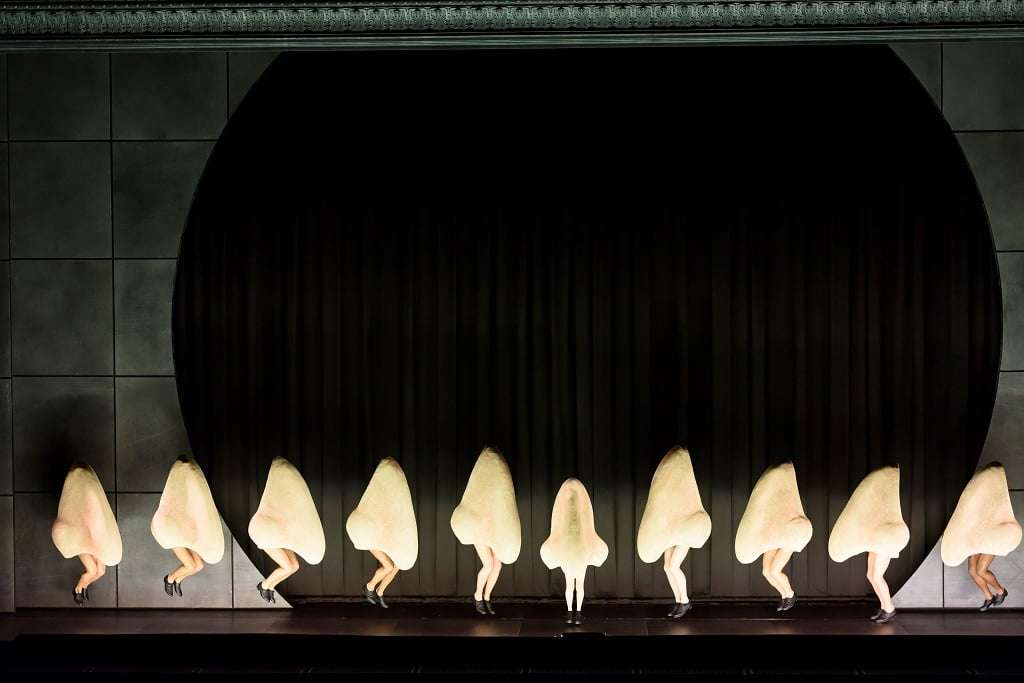 The Royal Opera’s production of Shostakovich’s The Nose continues this company’s recent policy of staging operas new to its repertoire. Not that the piece is unknown in London – the Opera Company’s production, with a resourceful chamber reduction by its conductor Patrick Bailey, appeared back in 2001 and its revival at the ROH’s Linbury Theatre to mark the composer’s centenary five years later almost coincided with a staging by the Mariinsky Theatre as part of Valery Gergiev’s typically (over-?) ambitious presentation of four of Shostakovich’s theatre works. As on that occasion, this new production utilises the composer’s orchestration with its sizable forces (not least in the percussion department) and over thirty individual singers among a cast whose extent in numbers is exceeded only by the sheer impact of its presence.

First staged by Leningrad’s Maly Opera Theatre in January 1930, but not revived until the Moscow Arts Theatre mounted a production forty-four years hence, The Nose is often seen as the climax of Shostakovich’s relatively brief yet spectacular dalliance with the modernism that permeated Soviet culture during the 1920s. The libretto, a four-way collaboration in which the composer seems to have had the major part, derives from the eponymous story by Nikolai Gogol. Suffice to add that what was prescient for the St Petersburg of 1836 remained so for the Leningrad of 1928 and, moreover, for the London (or any other Western metropolis) of 2016: thus, the degree to which considerations of normality and the everyday take on surreal and frequently nightmarish overtones in the wake of irrational and unforeseen occurrences. 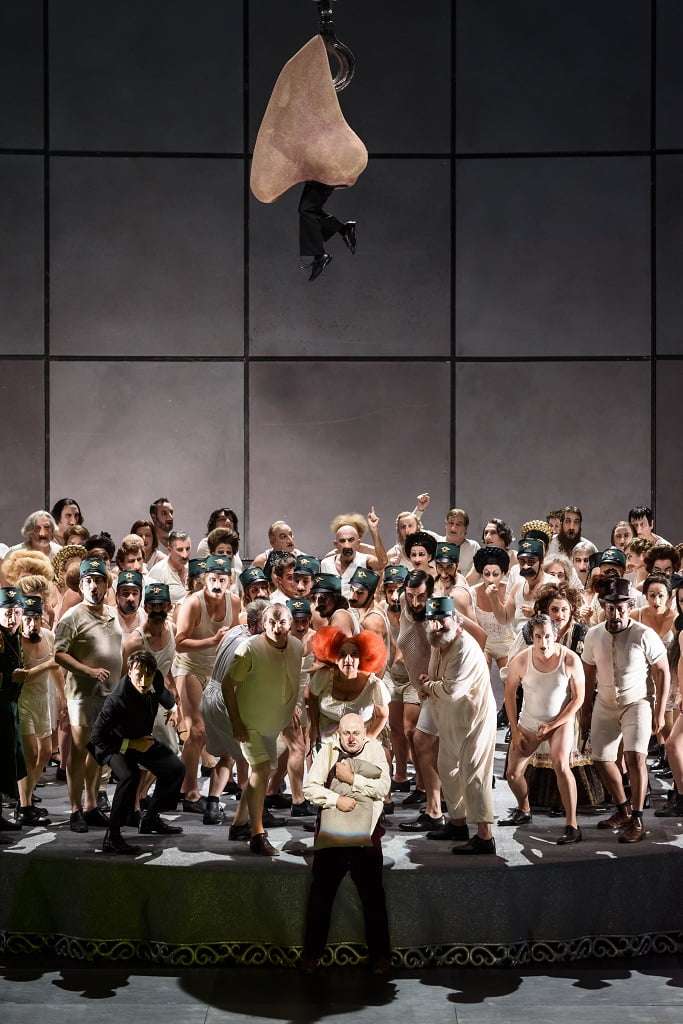 It is this aspect – within which all those many characters and situations are trapped – that gives The Nose its context, its meaning and, ultimately, its soul. Overriding it risks losing sight of the latter quality altogether, which is essentially what happens with Barrie Kosky’s staging – for all that it is impressively conceived and, for the most part, brilliantly executed.

Beholden to no specific time or place, Kosky has opted for a production rooted in circus and vaudeville routines with which audiences from the period would have been familiar; certainly the dance component is scintillating visually, not least that interlude of tap-dancing noses which links the second and third Acts so that this two-hour opera can be given (as intended) uninterrupted – to the benefit of its teaming musical invention but also its unrelenting theatrical exuberance.

At the same time, the sheer insistence and excessive nature of Kosky’s staging is its greatest weakness in denying those main protagonists any semblance of humanity beyond the merely stereotypical; reducing what could have been a provocative re-think of music-theatre to a song-and-dance extravaganza which sends its audience home happy if uncomprehending.

Kosky is abetted by the unrelieved garishness of Klaus Grünberg’s sets and (for the most part) lighting – notably the ‘tableau with tableau’ settings that reinforce the set-piece nature of the ten scenes, without concern as to how they might fuse into a greater whole other than by ‘in your face’ theatrics. Buki Schiff’s send-up costumes and Otto Pichler’s visceral choreography add to this sense of a staging with surface activity to spare but no depth, hidden or otherwise.

While David Pountney was uninvolved in the production, his imprint is unmistakable. Interesting, then, that it should be sung to his new English translation – which, though conveying the broad outlines of the Russian libretto, jettisons various of its subtleties in the desire to ‘involve’ the audience through a range of ill-chosen expletives and oddly-assorted slang. As in his translation of the libretto for Prokofiev’s The Gambler, staged by the Royal Opera six years ago, it seems odd when the attempt to render more intelligible an opera set in a language with which most opera-goers are unfamiliar (though is The Nose so much more oblique in this respect than several of Rimsky-Korsakov’s fairy-tale concoctions?) is impeded by the implicit desire to play fast and loose with its literary and dramatic content. 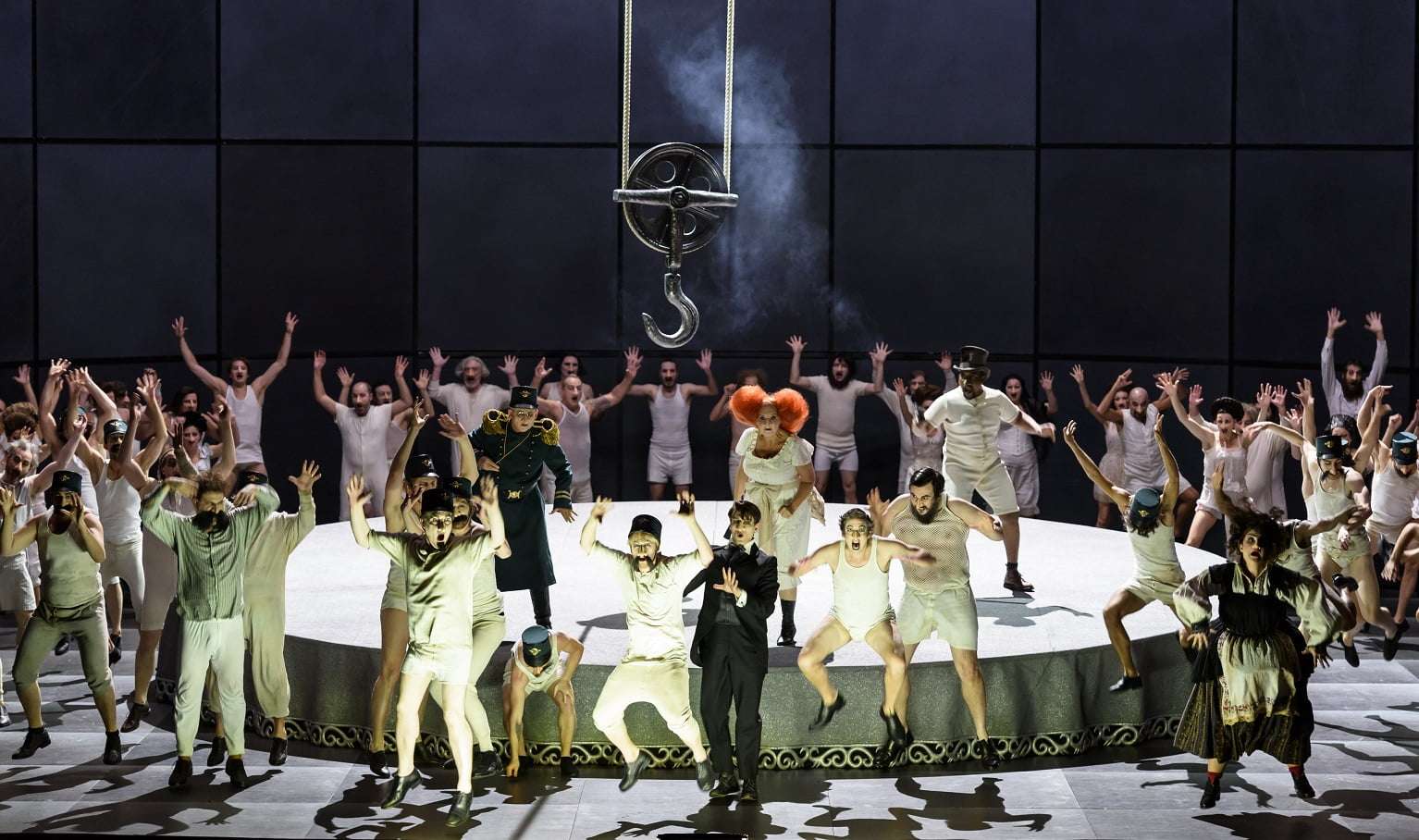 The cast (prosthetic noses and all) left little to be desired. Two-dimensional his persona might have been, but Martin Winkler conveyed unerringly the haplessness of Kovalov, a collegiate assessor at his wit’s end when he contemplates the loss of social-standing occasioned by his inexplicable ‘loss of face’. Such engagement without empathy was equally true of the other primary singers – not least John Tomlinson, as enjoyably sleazy as the barber Ivan as he was wearily sceptical as the Newspaper Clerk and blithely unconcerned as the Doctor, and Rosie Aldridge as the Barber’s hectoring wife. Alexander Kravets handled the harsh tessitura of the District Police Inspector with aplomb, with Wolfgang Ablinger-Sperrhacke conveying the wheedling disinterest of Ivan comparable to Susan Bickley’s star-turn as the Old Countess and Peter Bronder’s tardy compassion as Iaryshkin. There were also pert cameos from Helene Schneiderman as Podtotshina and Ailish Tynan as her daughter, while Ilan Galkoff in-passing stole the show for a danced Nose that was fully in keeping with the premises of this staging.

The Royal Opera Chorus was consistently at or near its best in what must rank with the most testing of its recent assignments, while the Orchestra of the Royal Opera House conveyed the intricacy and all-round virtuosity of Shostakovich’s instrumental writing with commendable assurance. That it did so was owing in no small part to the conducting of Ingo Metzmacher, making a welcome return to the ROH after notable productions of Korngold and Stravinsky, and for whom the difficulties of rhythmic and ensemble coordination posed few problems. Even he struggled to make the climactic scene of Act Three the true culmination of the opera, the music being all but obliterated by the sheer welter of inanities which Kosky places upon it.

That, ultimately, is the issue, and nowhere was this more apparent than at the very end of The Nose, when Kovalov again loses possession of the appendage in question. Effective as a theatrical pay-off this may be but, as with this production overall, it is hardly the last word.