Part 1: Songs from the Titanic 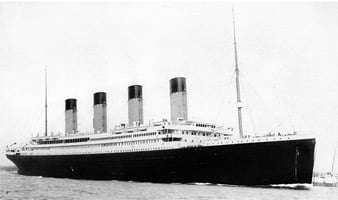 You would need to have been marooned on a desert island to have missed the excitement that has surrounded the 100th-anniversary of the sinking of RMS Titanic, the date itself being 15 April. From dramas (Julian Fellowes’s four-part costume piece) to dancers (Len Goodman’s BBC welder’s-eye view) everyone has something to say about what must be the most infamous maritime catastrophe ever.

This concert, five days short of the centenary, in its first part, took as its theme music that was performed on-board the ship. In the second, partsongs and instrumental music was fused with the Latin Mass for the Dead (shades of Britten’s War Requiem) in the world premiere performance of The Titanic Requiem. This ought to have been an interesting project and would have been so much better were it not for the organisation on the night. A ticketing problem meant that concertgoers trickled into the hall during the entire duration of the first half, and not just between pieces either. The result was a game of musical chairs with patrons hunting for their seats as the orchestra struggled on. This level of realism I can do without.

Filtering out the thuds of passing concert attendees, the unnecessarily amplified Royal Philharmonic Orchestra was largely on autopilot playing for the less-than-inspiring Maltese conductor Alan Chircop. Mercifully the music was mostly taken from the standard repertoire with the more-obscure pieces slow enough to be sight-read without too much trouble – the flute solo found in Wayne Grima’s arrangement of Asleep in the Deep being the exception that kept the unnamed principal on her toes.

Low points included an unfortunate arrangement of Schubert’s A flat Impromptu that questionably added strings. For this, Chircop moved from the rostrum to the piano, which was placed behind the violins. His touch was heavy and his performance lacked finesse, possibly because of the gratuitous amplification.

There were some fine moments, though – the nicely executed rubato from In the Shadows and a perfectly judged crescendo in the ‘Death of Åse’ followed by a hushed pianissimo at the end that temporarily quietened an audience clearly more interested in the premiere to follow. A polished and sensitive performance by the RPO in Songe d’Automne and a poignant string-quartet opening to ‘Nearer my God, to thee’ were a real delight.

And so to The Titanic Requiem, written largely by Robin Gibb and his son RJ (Robin-John). Robin Gibb, renowned lead singer of The Bee Gees, has had limited success as a solo artist since the group split on the death of his twin brother Maurice in 2003. Health problems related to cancer of the colon that he contracted in 2010 were apparent on this occasion: it was announced that he was in hospital. The concert was, however, being recorded and streamed online so he would be able to watch it.

The music that worked best of all was found in pieces that returned to more familiar territory of the song. Aled Jones’s performance of ‘Daybreak’ was unsure and one wonders why Mario Frangoulis, featured on the CD recording, was not used. Nevertheless the three songs – ‘Daybreak’, ‘Christmas Day’ and ‘Don’t Cry Alone’ (given his absence Robin Gibb was heard from CD) – are all fine eforts and ‘Don’t Cry Alone’ being released as a single wouldn’t surprise me.

Unfortunately the ‘classical’ bits were not as successful. Injudicious amplification affected much of the performance, distorting the balance between the anvil (depicting the ship yard) and the orchestra. Apart from the songs the music is otherwise insubstantial and derivative – Shostakovich and Barrington Phelong at opposite ends of the musical spectrum are called to mind.

Applause between movements made the concert disjointed and very long (three hours in total) leading those of us in the ‘cheap seats’ to long for the awaited iceberg – one member of the audience close to me called it “steerage”.

References to the Latin Mass appeared as if they had been shoehorned into the overall composition. From the ‘Dies Irae’ sequence, “Confutatis Maledictis” (while the wicked are confounded) that occurs at the end of was followed by “Tuba, Mirum” (wondrous sound the trumpet flingeth) that is found at the start. The words were for their own sake perhaps, but if you were writing a requiem one would expect something more.

Judged by the audience reaction, The Titanic Requiem was a great success. My view is, although inoffensive, it will sink into obscurity, perhaps remembered for a few songs.