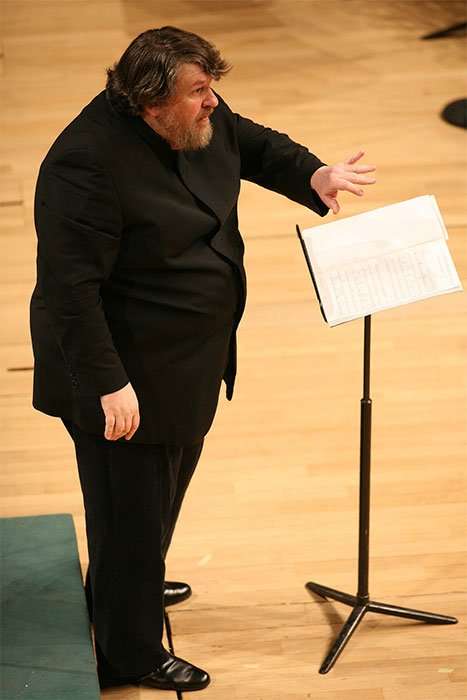 Two nights ago Simon Rattle in his first concert as music director of the LSO included pieces by Helen Grime, Thomas Adès, Harrison Birtwistle and Oliver Knussen. In turn they are complementing the occasion with programmes of their own, beginning with Knussen as conductor, composer and champion of causes.

At the start of this well-attended concert Knussen made a spectacle of himself – he’d left his glasses backstage. On return having recovered them he led Polly Roe by Patrick Brennan (born 1985), an eightieth-birthday tribute for Birtwistle in 2014 and scored for the same forces as the latter’s Tragœdia, strings, winds and harp. Polly Roe (an attractive title not explained) is a terrific and exhilarating piece full of ricochets, glints and incisive rhythms. This being Knussen, Polly Roe was played again, and well-worth the repetition of its four minutes. Birtwistle’s Silbury Air, for large ensemble (including brass, percussion, piano and harp), retains its thrall after forty years, and it’s difficult to imagine it being better given than here. This compelling piece flew off the page, music of express-train energy and clockwork precision – various mechanisms meshing to convey an idiom at once elemental and deep-rooted.

Knussen’s own piece is from this year and was first heard at Aldeburgh. The London premiere of O Hototogisu! (part of an intended bigger work) was slightly delayed by celestial noises-off. Once cleared this Haiku-inspired creation proved irresistible, whether through the fantastical writing for flute, the comely contours for soprano or the luminous scoring, not least the japonaiserie clicks and chimes of percussion. This is music of intrigue and evocation, so an immediate reprise was doubly welcome. As a postscript, I wonder if Knussen may yet complete his long-delayed Fourth Symphony (originally commissioned by the New York Philharmonic) and Cleveland Pictures (which made the Proms Guide a few years ago but was subsequently withdrawn from the concert), and I believe there is a projected Piano Concerto for Peter Serkin.

Knussen’s Stravinsky selections included two pre-Rite song-cycles – one Balmont, one Japanese – all five settings epigrammatic if with so much to say especially when sung so delectably by Claire Booth, her eloquence sensitively accompanied and with virtuosity to the fore in the scintillation of the second Japanese Lyric, ‘Tsaraiuki’. Renard (post-Rite, 1916) closed the concert – fabulously – this surreal “farmyard fable” brought off with amazing flair and in foxy style. From the rambunctious march-past of the opening to when it returns at the end, the sheer verve of the performance held the attention (complemented by English surtitles, the programme containing the other texts), the four gents of RSVP Voices parading in and out to these swaggering bookends, and when arrived they responded so very persuasively, holding the stage with magnetism. One might mention Tim Williams’s brilliant playing of the tangy-sounding cimbalom (adding paprika to the anyway-heady scoring) but really one should list all the BCMG musicians, superb without exception, and reacting with alacrity to Knussen’s lucid ‘standard repertoire’ direction.

The only cavil, having thrown everything at “This is Rattle”, is that BBC Radio 3 wasn’t present for this ‘Ollie’ event, although the Birtwistle-chosen line-up does attract its microphones. Given the Rattle connections and their own interconnections, surely the other three Milton Court presentations demand(ed) the same attention.