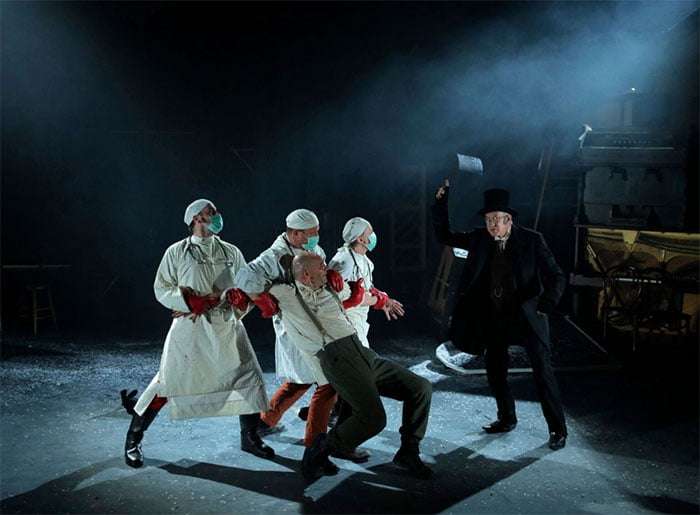 Schubert’s Winterreise has come in for its share of performance enhancement – Ian Bostridge filmed in an asylum, Peter Pears filmed looking like a glum Sherlock Holmes, Simon Keenlyside in a dance version, Mark Padmore sharing it with an actor reciting Samuel Beckett (who was obsessed by Winterreise) – so there is a provenance of sorts for Woyzeck in Winter. Conall Morrison has grafted Schubert’s song-cycle onto Georg Büchner’s play Woyzeck, and the combination works so well you wonder why no-one had thought of it before. There is also a weird serendipity about the project – Büchner and Schubert both died young while still working on play and song-cycle, as had Wilhelm Müller, whose poems Schubert set and who never knew the posthumous fame the composer conferred on him – and Woyzeck also dies young.

Both Woyzeck and Winterreise go way beyond the misty remit of early German romanticism into a very modern nihilism and unflinching consideration of humanity’s and life’s fragility, and Morrison’s play and staging unhooks the music from its historical context in a way that anticipates Alban Berg and his opera Wozzeck. 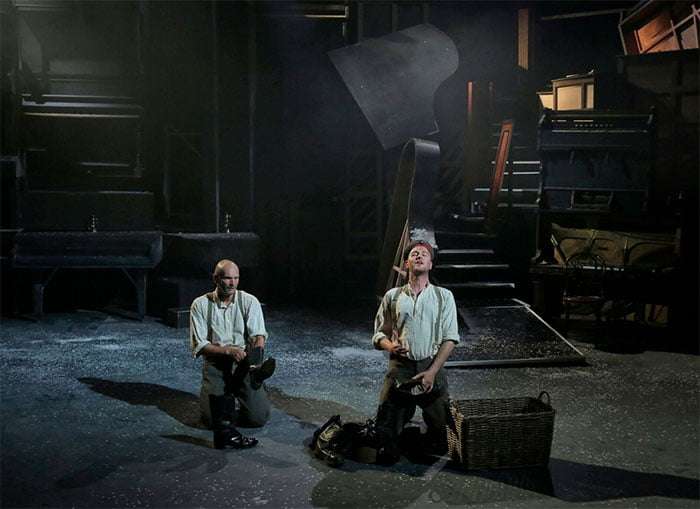 Stephen Clark’s lyrics keep in touch with the spirit if not the word of Müller’s originals, and Morrison uses twenty of the twenty-four songs, not in sequence, both to support and subvert the play about the soldier Woyzeck, a sort of betrayed Holy Fool hideously exploited by the Captain and the Doctor, who murders Marie after her fling with the Drum-Major, then drowns himself.

There isn’t a moment when anything felt contrived, especially when measured against Jamie Vartan’s sensational set, a graveyard of ruined, mute pianos piled randomly into a tottering heap that sums up spiritual desolation. Fragments of songs, often just their accompaniments, and complete settings means that the music is hardly ever silent, and, like a soundtrack, triggers an astonishing range of resonances to pile layers of meaning onto the words of the play.

With the actors, discreetly amplified, singing with unselfconscious lack of refinement, the result slips easily between cabaret – indeed, there was a moment with a singing monkey that could have come straight out of Cabaret, or a Sondheim musical, even the world of Schoenberg’s Pierrot Lunaire. With the pianist Conor Linehan etching in the songs with ghostly precision, it became impossible to separate the connections between words and music or to count the jolts of recognition they generated. It’s safe to say that the audience was totally absorbed for the one-hundred-minute duration. 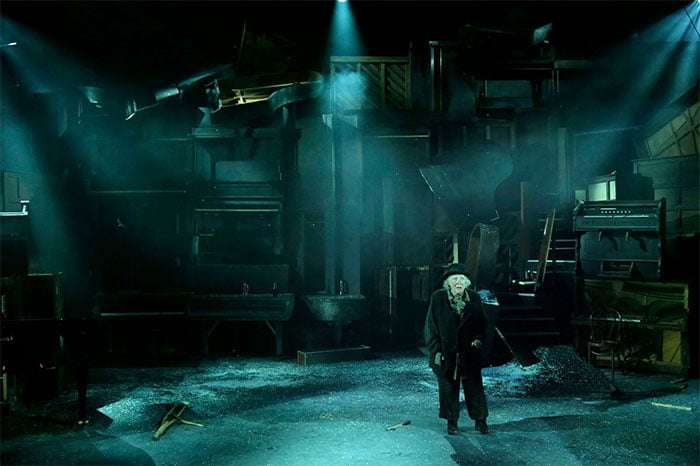 The worlds of the theatre of the absurd and the comical bleakness of Beckett teetered on the edge of emptiness, superbly expressed by the two leads. Patrick O’Kane’s visceral, puzzled Woyzeck, vainly struggling towards the light, acted and sang with unfailing rawness. As Marie, Camille O’Sullivan expressed a Billie Holliday-style world-weary grandeur, whether lusting after the ghastly Drum-Major or pathetically reciting the Bible story of the woman taken in adultery, and she looked wonderful in the part.

Peter Coonan, dressed as a toy-soldier Drum-Major, was textbook compulsively repulsive, Stephen Brennan’s Captain and Barry McGovern’s Doctor brilliantly piled on Woyzeck’s torments, while Shane O’Reilly’s touching Andres and Rosaleen Linehan’s ultra-Beckettian Hurdy-Gurdy-Man added to the extraordinary pathos. Linehan’s contribution was magnificent. Inevitably, behind all the words and the songs, there was a very Irish, very poetic sensibility at work, which, with the snow constantly drifting down, reminded of John Huston’s film The Dead (his adaptation of the final story in James Joyce’s Dubliners) but with a very different epiphany. What a memorable evening.