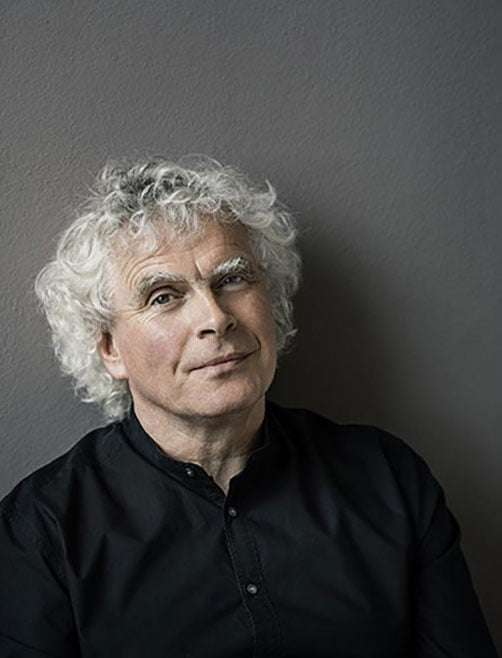 Climaxing the “This is Rattle” festivities, albeit with a second performance and a “Birtwistle curates” recital still to come, this astonishing evening offered Stravinsky’s first three ballets at a single sitting – a long-held wish of Simon Rattle’s amounting to extraordinary vision, bravura and memory, affirming, urgently and viscerally, of the place this music has in history.

Spread before us was a Giant’s Causeway of basaltic columns and geometric blocks, of rhythms, sounds and colours, legend and eruption, barbarism and beauty – a Thulean panorama long before man. Notwithstanding everything else artistic that was going on, here veritably, in all its bold naked rawness, was the crucible of the twentieth-century, Stravinsky, the arrogant “savage” Russian from far away, “slim and uncommunicative”, the quixotic magician, the baleful blacksmith of bardic, northern nights, throwing everything into the pot, hewing mountains, traversing psyches, and releasing dark forces out of seeds and tumults more filmic than narrative, juxtaposed rather than spliced. Flames become furnaces and anvil sparks turned molten storms course through these timescapes, their jewels of respite strewing iron shores and metal fields in shapes and mountings planets-away from Fabergé-Romanov aesthetic.

Presenting the three ballet-scores chronologically, 1910-13, the stage subtly backlit for each (red, blue, green), enforced their familial similarities – Russian lore, demon powers, cell-and-stud construction and scoring most obviously (orchestral borrowings too). This is commanding Rattle territory, as defining for him as it had formerly been for Monteux and Boulez. Favouring a standard platform layout (violins to left, cellos and double basses to right), Rattle’s biggest strength, simple as it may seem, was to keep the music moving onwards without undue hiatus or indulging.

This paid handsome dividends in the complete Firebird, a work that can often become bitty. He held it together beautifully – at once painter, sculptor, architect, narrator and sound-designer. From the outset he drew the listener into the orchestra and the texture. We were given close-up Cassini encounters, every colour and combination of timbre incisively delineated, not a rhythmic nicety missed, each phrase, each radical contrast and each offstage trumpet finely breathed. Rattle knows how to vitalise an orchestra without excessive gesture. Sometimes he all but stands still, eyes and posture doing the talking. Yet his autocracy has time for the individual. Among the many stars were Gareth Davies (flute) and Timothy Jones (horn): the latter’s closing solo, coming out of nowhere, spotted to perfection, with wonderful dynamic nuance, floated against a backcloth of softly shimmering strings, was the stuff of greatness.

Petrushka was all about bustle and Blackamoor menace, lurid winter light, stark strokes and luxuriant lushness. Though arguably a little on the brisk side, with one or two uneasy corners, the cameos and set-pieces were intricate and precisely turned, the pages of evocation and fairground-scene washed in oppositions of oily brightness and watercolour nostalgia. This was a fest of virtuosity and chamber-balanced exchange, reaching thrilling magnificence and dynamic risk-taking in the closing tableau. Davies again made supreme poetry of his moments; Philip Moore (piano obbligato, centre-stage facing the podium) and Philip Cobb (trumpet) glittered, no pressure. Rattle has long favoured the leaner 1947 revision of the music (he’s doing it again in Berlin in November) – but, given the concept of this programme, it would have been good to hear the fuller-scored 1911 original: the extravagant abandonment of a young man the composer couldn’t quite return to post-war.

For The Rite, Rattle was energised and involved to the last (perfectly co-ordinated) chord, the LSO in chrome-plated form. On balance, though – not surprisingly perhaps, given the concentration levels of the evening – it was a reading less charged and ferocious than the one with which they electrified this room in January 2015. Rachel Gough’s high bassoon entry is always special, but on this occasion she was a touch too present, contrasting 2015 when she appeared from out of frozen solitude. But, like the relatively held-back close of the ‘Dance of the Earth’ (brilliant yet strangely lacking cadence), we quibble somewhat. Cumulatively, there was plenty to stun, plenty of elemental drama, every department of the LSO excelling, the coloration vivid, inevitable, terrifying, snarling, the processional, assault and climaxes relentless. The eerie opening of Part Two, the whispered dynamics, riveted the attention. Still, one felt, music for the future.

This was a concert of ghosts around and within us – Diaghilev, Bakst, Fokine, Benois, Nijinsky, Karsavina. Of cordial Berlin contributions – Sacre using an old set of parts from the Philharmoniker, Sarah Willis guesting with her Wagner tuba. The audience was conspicuous for so few young faces: no student should have missed the experience.