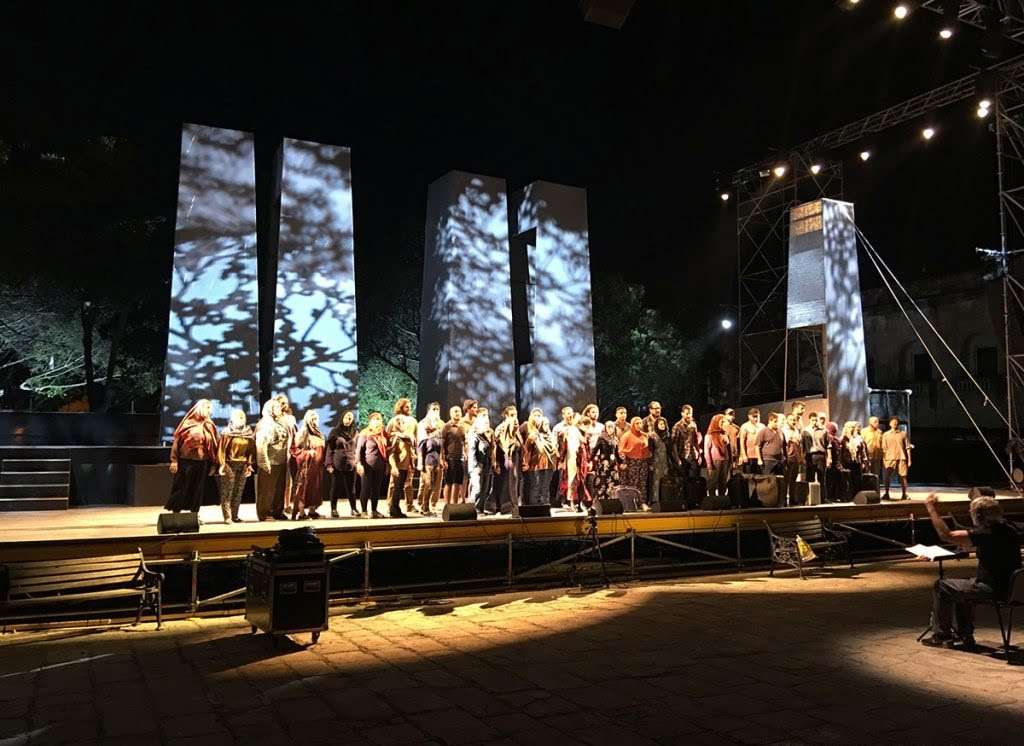 “An unassuming family, whose members, through no fault of their own, find themselves caught up in the eye of the storm. The grief of a man who loses his wife, the pain of a youth who watches his people suffer, a young woman who cannot stand to see more injustice … profoundly touching themes because we are, after all, made of the same flesh and blood, the same pain, the same joys and hopes.” The film producer and director Mario Philip Azzopardi, the librettist of Aħna Refuġjati (We are Refugees) agrees his subject matter is “very difficult” – his backcloth “politics, religion, war, the past, beliefs and faith”, his arena “one of the biggest tragedies of our time: the plight of refugees.”

At the heart of the story is a Syrian family – Eleja, his wife Shari, and their children, aged between ten and twenty – who attempt to flee their ravaged, war-torn village in the hope of better days in Europe. Crossing borders, coping with violation, racism, separation and loss, the journey is anything but easy. A storm breaks out, their boat sinks, drowning many migrants. Other deaths follow, including those of Shari and Darit, the youngest daughter. Eleja, his son Hamid and eldest daughter Saja “summon up the courage to keep forging a life in Europe, in spite of all the obstacles standing in their way.” The obstacles are to prove many, likewise the hostility of their apparent new hosts, as we come to witness from the locals gathered at their arrival and towards the end following the death of Eleja – in a contrivance knifed accidentally by Hamid. In the final scene, Eleja’s primal vision of hope, “peace and prosperity” in a foreign place shattered, Saja laments about being “lost in a hopeless sea, in a land that offers nothing, before eyes that will never consider me worthy … better to go back to that which made me who I am, back to that which shaped my forefathers, to that which nurtured the song of my people … Escape only helps those who wanted to tear us apart.”

The two acts are divided into twenty scenes. Act One: War, Exodus, The Sea, The Coast, The Camp, Freedom. Act Two: The Tableaux, A Camp in Europe, Karl (a volunteer), In the Camp, Rock Band, Mirani (an activist), Karl and Saja, Band, Fight, Provocation, Death, The Lament, No Stone Unturned, Finale.

Packing a punch, Mario Sammut’s soundtrack – 184 virtual instrumentalists programmed and mixed in his Silent Studio (there is no live orchestra, microphoned singers providing the human element in the equation), three years in the making according to Azzopardi – is extravagant and full. Sammut, aka ‘Cygna’ in the dance/electronic sphere, is a musician, composer, sound-designer and music producer, marketed by the French label Ultimae Records for his “organic atmospheres warming spaces with lit sound journeys … magnifying unique combinations of modified ambient sounds.” Antoine Farrugia, responsible for the art direction, describes his concept of scenery and props as “a set that is part of the cast, with its own movements, its magic moments, and a script that allows it to follow scenes and cues.” An open-air stage wide enough to accommodate a truck of revolutionaries driven fast, eight massive obelisks, floodlit trees in the background, and complex lighting and colours in play – the result of two years of brainstorming and planning, Azzopardi having “a clear vision of what he wanted” – ensured immediacy, involvement and impact from kick-off. 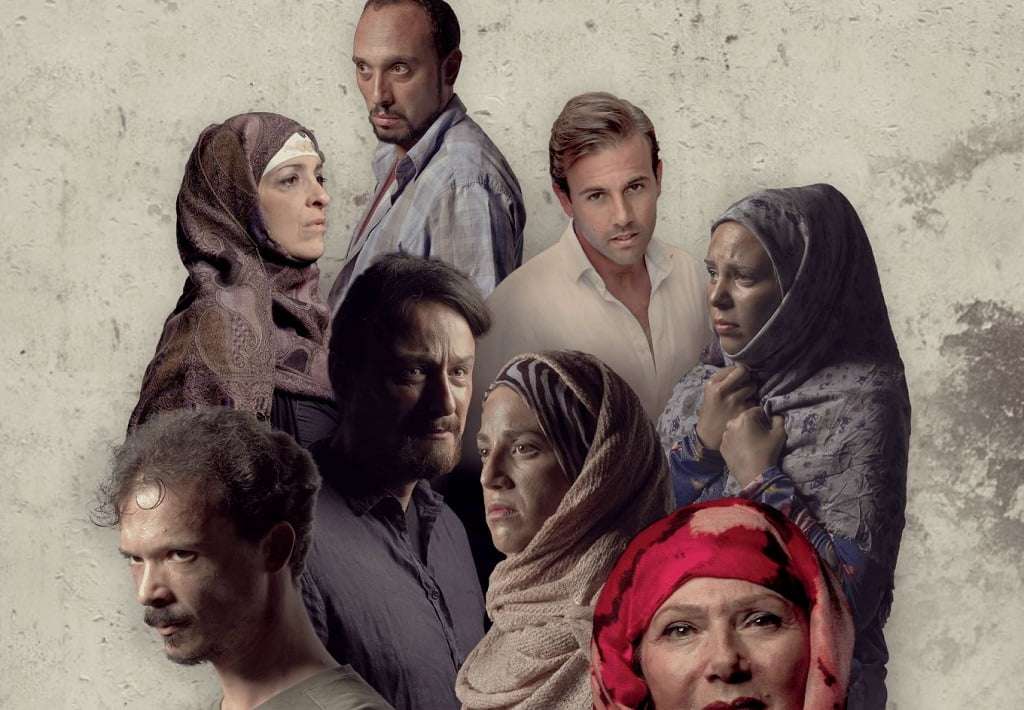 Hot twilight, heavy dew, dazzling glare, fireworks, bustle, crowd scenes, high decibels, scarved mamas, glam disco. Realities, allegories. Not the first opera in Maltese (that was Charles Camilleri’s il-Wegħda in the 1980s, to words by Joe Friggieri), nor the first about refugees (Szymański’s Qudsja Zaher premiered in 2013, setting a libretto by the filmmaker Maciej J. Drygas, tells of an Afghan woman who throws herself from a derelict ship to find herself stuck between life and the underworld), Aħna Refuġjati, three months in rehearsal, was conceived as one of the showcase events of the Valletta 2018 European Capital of Culture calendar, with two performances scheduled (the second on September 2).

The skilled execution of the exercise, the collaborative willingness of a large cast of soloists, actors, acrobats and extras, could not be denied. Likewise the experienced cuing and conducting of Sammut’s collaborator, Richard Merrill Brown, in charge of arrangements and music preparation. Yet there are parts of the work arguably requiring greater refinement to achieve better balance, more subtlety, a variety of pace and dynamics, to eliminate questions, contradictions, the dramaturgical unease felt at times in spite of everyone’s best efforts. Miriam Gauci’s redoubtable experience from La Scala to the Met was unmissable, her voice abundant in expression and phrasing. If, at times, she seemed disquietened, before exiting the action in Scene Four, maybe it was because the nature of the vocal writing and density of backing called for degrees of tension and projection that too frequently took her beyond her customary lyric soprano comfort zone. ‘Queen of the night’ to my mind was Clare Ghigo as Saja – a mezzo of richly moody colour and thespian power, whose long, emotionally deep closing aria, alone but for the ‘ghosts’ of her family, quintessentialised quality, sensitivity and humanity, magnificently sustained. Equally commanding, not least for singing in clearly-dictioned Maltese, was the countertenor José Hernández Pastor, whose liquid voice and portrayal of Eleja had a simple, affecting inevitability. Nico Darmanin, Joseph Zammit and Louis Andrew Cassar caught their roles believably, Cassar’s treacherous Mirani cutting through.

Whether a “next generation opera” combining facets of classic theatre and contemporary cinema, or a “show” (the art director’s definition), the world of musical and art-installation rarely far away, seeking to “raise consciousness about situations [inhumane conditions, the “boats of salvation” that never are] too often ignored or soon forgotten”, Aħna Refuġjati addresses a subject “short of empathy and compassion.” If it’s a couple of hours of easy diversion you’re after, forget it. But if it’s an evening of debate and discussion, consider again.