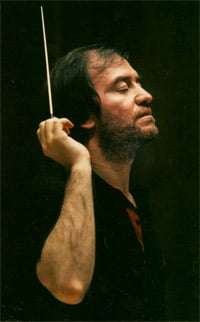 This was the second of three concerts in the Vienna Philharmonic’s annual visit to New York, this time led by Valery Gergiev, the concert beginning with a beautifully nuanced performance of Prélude à l’après-midi d’un faune. Gergiev took it at an unhurried pace, with an occasional brief pause for effect, his arms sometimes resembled bird-wings, and his fingers fluttering feathers. Gergiev was subtle in his management of dynamics, as when the strings surged in crescendo and then softened gradually. All of the solo players were outstanding: horn resonant, oboe sinuous, clarinet gently touching, violin ethereal, and, most prominently, the marvellously played flute. Although this music was being made by an Austrian orchestra under the direction of a Russian, it came across as quite authentically French.

Yefim Bronfman then gave a very persuasive performance of Prokofiev’s Second Piano Concerto, a work that reflects a more-mature stage of the composer’s career than its place in the numbering scheme would suggest. The score of the concerto, which had been considered shocking at its 1913 Saint Petersburg premiere, was destroyed in a fire, and it was not until a decade later, that Prokofiev (then living in France) recreated the score of the Second Concerto from memory, but with revisions that reflect the compositional maturity he had gained in the interim.

The concerto is in four movements of which the first and last are extensive, dramatic and feature lengthy cadenzas. The middle movements are briefer and contrast sharply both with one another and with the outer movements. In the opening Andantino, Bronfman introduced the principal theme with evident affection, and then, when it was taken up by the orchestra, he created a series of nice effects, including short rising and falling scales, dramatic chords, and glissandos as he played variations on the theme. Bronfman brought considerable heft to his playing of this movement, particularly in its extended cadenza. Bronfman powered his way through chromatic passages encompassing the entire keyboard, echo effects, scales, and runs, finally giving way to a colossal tutti passage, but then returning to bring the movement to an end with quiet repetitions of a fragment of the main theme.

In the fleet scherzo, Bronfman was dazzling in a non-stop display of rapid-fire pyrotechnics that started at full-speed and ended without warning with a sudden two-note cadence. In the darker Intermezzo that follows, the pace was much slower as Bronfman evoked a range of moods. The piano line was march-like at some times and playful at others, with repeated glissandos accompanying jaunty orchestral passages, then later became more forceful until just before the movement’s quiet end.

The finale began loudly and at high speed with Bronfman playing a leaping, rhythmic tune that increased in intensity until a persistent motif on the strings and bass-tones from the brass changed the mood. Bronfman exchanged material with the cellos and double basses, after which his playing became almost dreamy, with softly rolling figures in the left-hand, and then extended runs to accompany the solo bassoon. A quickened pace ensued, with winds, trumpets and horns followed by the slowed-down bassoon melody, two dramatic chords, and then another cadenza. Here, Bronfman deftly played intricate figures with the left-hand as his right struck notes intermittently, as if ringing a bell. From there, after a soft passage for the piano accompanied by string tremolos, it was a quick journey through a vigorous, percussion-filled coda to the concerto’s end. As an encore, Bronfman played Domenico Scarlatti’s Sonata in C minor (K11).

More Russian music followed the interval – Tchaikovsky’s ‘Pathétique’ Symphony. With only a few cavils, I found this a very moving account of this masterpiece. In the opening movement, beginning with the dark introductory solo bassoon and low strings that set the gloomy mood, Gergiev drew a wonderful, rich sound from the orchestra. The strings took on a warmer lustre when the romantic main theme finally appeared, sweeping upward, incalzando, at each repetition of its middle section. In the early part of the opening movement, Gergiev extended slightly the score’s numerous rests, adding to the sighing quality already reflected in the thematic material, but interrupting the flow more than ideal. In the development section Gergiev balanced the full forces of the orchestra in the stormy passages and controlled the frequent changes in dynamics masterfully. The brasses were particularly outstanding here and in the chorale that died out in the coda.

The rhythmically quirky 5/4-time waltz followed, but began too quickly to allow its lilting quality to come through fully. The third and fourth movements were flawless, however. The scherzo was brilliantly done, building tension until the main theme emerged on the clarinet, transforming the movement into a stirring march. Although the brass and winds are at centre-stage for much of the movement, it was the strings that most impressed. Their marvellous unison-playing provided an undercurrent that propelled the movement, supplied heft to the powerful tutti passages and showed off their virtuosity in rapid ascending and descending runs toward the movement’s end. When it reached its colossal conclusion, Gergiev, with an upward sweep of his arm, cut off a woman’s “bra…” before she could get to “…vo”, and immediately launched the last movement.

Tchaikovsky marked the opening of this finale Adagio lamentoso, and that is just how Gergiev and the orchestra played it. It was heart-wrenching from beginning to end, with the sighing of the strings reinforced by contributions from stopped horns and trombones. The emotionally devastating final passage on muted strings and bassoons, and ultimately only the cellos and double basses, was followed by a long silence before the audience broke into applause.

The ‘Panorama’ from Tchaikovsky’s The Sleeping Beauty ballet-score was offered as an encore.